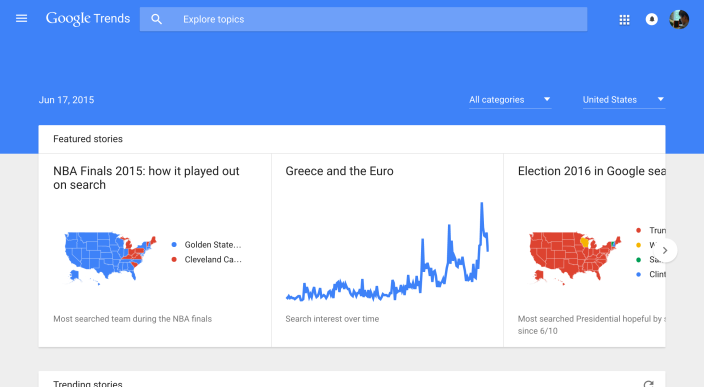 Google has today pushed an update to its Trends product, which it says is the biggest expansion to the search analysis product since 2012. The goal with this update, the company says, is to provide a “faster, deeper and more comprehensive view of our world” through real-time data on everything from the FIFA scandal to Donald Trump’s presidential campaign kick-off.

END_OF_DOCUMENT_TOKEN_TO_BE_REPLACED

A couple nice new features for Google Sheets users are rolling out today including the ability to copy and paste charts and a new trendlines feature.

Sometimes it’s helpful to recognize and track patterns of data in your spreadsheets, so that’s why today we’re launching trendlines to scatter plot, bar, column, and line graphs in Google Sheets. Trendlines are commonly used to analyze financial and scientific data, but they can even be useful in the classroom or for personal needs like budgeting.

There are a bunch of ways to customize trendlines in Sheets, like: -Choose between exponential or linear trendlines -Add a variety of labeling options -Customize your trendline

Today’s update also brings the ability to copy and paste charts in Sheets between other sheets or spreadsheets.

Google has more info on adding trendlines to charts here.

Website owners who want to add visitor satisfaction surveys to their sites can now do so just by adding a single line of code, at a cost of just one cent per response thanks to a new tool from Google Consumer Surveys.

So far the service is limited to US visitors using non-mobile devices, so its immediate value will be limited, but it’s likely to be expanded in scope over time.

As an aside, recent reports that the British government is planning to use Google data as an alternative to its ten-yearly population census have been greatly exaggerated. All that is actually being proposed is to feed in Google Trends data as one small component of the information collated for the census.

On top of the data that it regularly compiles each year and makes available through its Trends website, Google is today rolling out a “Top Charts” section that will allow users to check monthly trends based on Google’s Knowledge Graph. There are top charts in more than 40 categories currently, the charts can be embedded, and the new tool also provides a number of search options. It’s only available for search data from the U.S. right now, but we expect it will roll out to others in the future. YouTube introduced a new way to see which videos are popular in your area today through trend maps.

Google supplies a vast library of demographics information on its YouTube Dashboard, and now visual mapping is an additional and fun option.

END_OF_DOCUMENT_TOKEN_TO_BE_REPLACED