Much like the five apps that Sony released last week for its SmartBand Talk, ASUS has today launched three apps for its upcoming ZenWatch Android Wear device (via Android Police). It’s kind of unfortunate, really, because Google made an app called “Wear” to do the kinds of things that these apps were made for. But along with Motorola (and the Moto 360), it appears the company has decided that it would rather have complete control over pairing and syncing its smartwatch.

The first of the three is the most basic in functionality, called the ZenWatch Manager. This app lets you walk through a variety of settings for the watch, including choosing a watch face, setting up the watch for phone unlock, and other basic functionality. The app even lets you set up an emergency message in the case that you might be an emergency situation, and a few small apps like “Compass” are added via the ZenWatch Manager app as well.

ASUS also released two other companion applications for the ZenWatch, including ASUS Remote Camera, and ASUS Wellness. The first—obviously—lets you use your ZenWatch as a remote control for your phone’s camera. Giving you access to your viewfinder and shutter, the app runs on Android 4.3 or higher and will supposedly work with any Android Wear device. ASUS Wellness isn’t an extravagant innovation in the health app space, but as you might expect, lets you track your activity and movement. 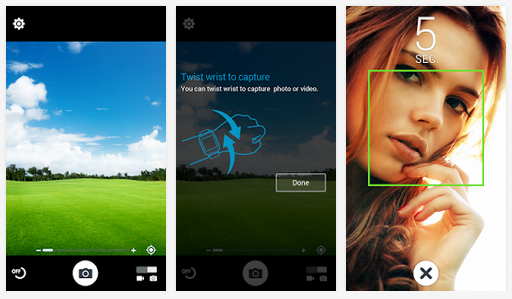 All three of these apps are free on the Google Play store, and will actually be useful once the ZenWatch launches in the coming weeks.