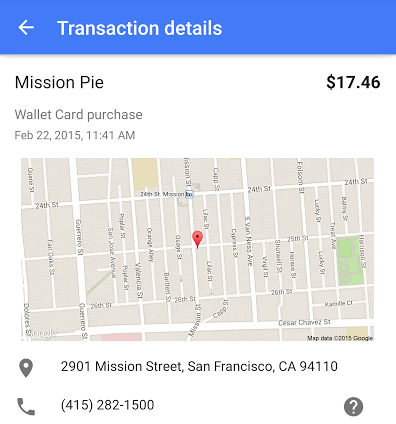 Google announced today that it has started rolling out an update to Google Wallet on Android with a couple of notable new features. First off, Wallet on Android now packs Google Maps integration. With this integration, you can see exactly where you performed any given transaction on an embedded map. This feature, Google says, will make it easier to notice any sort of suspicious activity that occurs.

Google Wallet on Android also today gained a new search tool that should have been there from the beginning. From the Transactions page, you can now search for things like merchant names and the purchased items and see the results. You can search by simply tapping the magnifying glass on the Transactions page.

The update is rolling out now via the Play Store and appears to be available now for nearly everyone, so check it out.

Reuters separately reports that Google is under legal fire for failing to get a lawsuit dismissed that accused it of invading the privacy of Wallet users. Plaintiffs of the case claim that Google sent an unnecessary amount of personal information to the merchants of apps and products. U.S. judge Beth Labson Freeman ruled, according to Reuters, that Google must face these claims, even though it has modified its data sharing policy in Wallet. Alice Svenson, one of the plaintiffs, is seeking class-action status for the case with damages of $1,000 per violation.