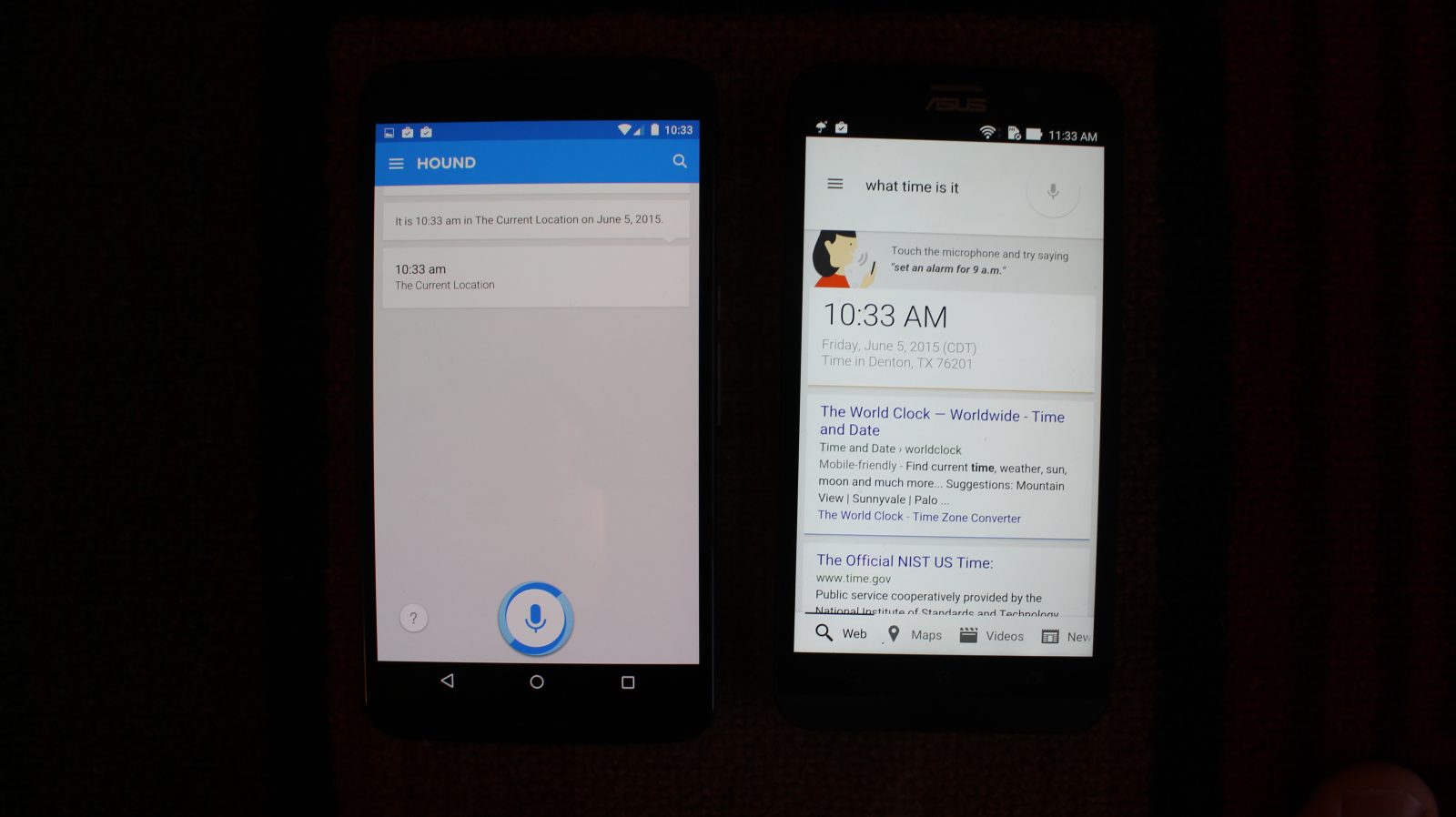 We told you earlier this week about a new voice assistant called Hound, and if you take SoundHound’s internal demo at face value, the app seems like it’s almost too impressive to be true. That video actually went somewhat viral (despite being recorded with a potato), and we wanted to put Hound through the paces to see if it lives up to the hype. We decided it wouldn’t hurt to put Google Now in the mix too and see how SoundHound’s new app compares to Google’s trusty voice assistant…

What we found is that while the things that SoundHound has demoed are legitimate and accurate, there are still areas where Google Now is champion. While most queries are so much faster using SoundHound’s app (and the app is capable of more complex queries), there are some that it just doesn’t know how to answer—ones that Google Now has been answering for years and can spit out responses to using knowledge graph in seconds.

Some things that Hound can do suddenly make Google Now seem incapable, though. Simple queries like “tell me about restaurants in Austin that have more than 3 stars” are answered with a list in seconds with Hound, but Google Now simply provides the usual search page. But this is also true about Hound. Asking “when was President Obama born?” for example, has Google Now providing the answer directly and Hound just giving me a search page.

In terms of overall speed, Hound is absolutely brilliant. While it’s not as fast as the demo video seems to make it (I think that the internal video was a developer using the app with a speedier voice response flag turned on or something), it’s definitely faster than Google Now in many cases. For example, asking “what is the population of the capital of Louisiana?” saw both providing the right answer, but Hound was faster to the answer and more concise, while Google Now read a Wikipedia article verbatim.

Of course, there are the new complex commands that only Hound is able to comprehend. The last couple of queries that I give the two services in the video above are in this category. I asked both services to “tell me about hotels in Austin that have at least two stars, cost less than $200 per night, are pet-friendly, and have WiFi.” Of course, while Hound spit out several options for me to choose from, Google Now just gave me some Google results.

Overall, there isn’t really a clear winner here. While Hound is great at some things that Google Now has never been capable of, it’s also lacking in many areas. Google Now has access to information like the flights I’m going to take via my Gmail inbox, and Hound doesn’t. Google’s knowledge graph is a strength in some areas (like answering questions such as “where the singer Adele was born”), but it holds Google Now back in other areas. Google Now just isn’t powerful enough to handle complex queries about restaurants, hotels, and voice commands that ask the app to do many things at once. Hound does these things, and it does them fast. But it’s not smart enough yet.