Google introduces News Lab, wants to use its tech to ‘help build the future of media’ 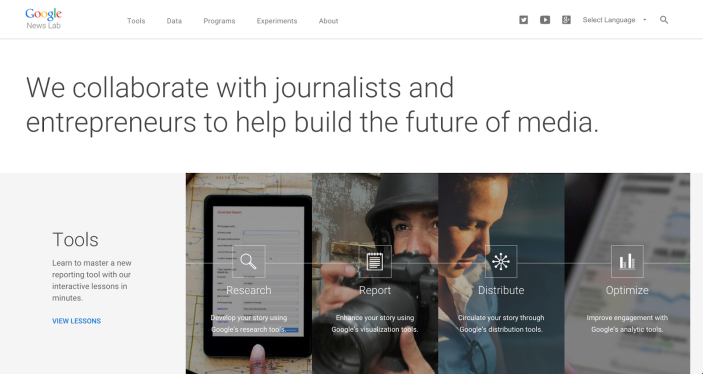 Google has this morning announced a new effort called News Lab, which is the company’s attempt at using its many resources and technologies to help usher in a new age of innovation in journalism. There are three basic tentpoles to what the company is doing here to empower journalists: tools, data, and programs.

Google has always offered many tools that can used for reporting, including YouTube videos, Maps data, image search, and more. With today’s launch of News Lab, Google is bringing a range of tutorials for many of its products to the News Lab website so that journalists can better take advantage of them. From YouTube to Google News to Google Alerts to Newsstand, the website offers many interactive lessons and quick links to the tools journalists need most.

Now, journalists around the world can access tutorials on these products created specifically for newsrooms, at g.co/newslab. We’ll post short written and video tutorials and case studies that highlight best practices from top newsrooms around the world.

Much of Google’s publicly available data is also invaluable to reporters. Google Trends is one of the biggest sources of Google data that is widely used in the media, and as was announced last week, Google is completely revamping Trends to make it more useful to all. The new version was built “especially for journalists,” Google says, and it’s now even more useful for real-time data analysis and reporting.

To help journalists use our data to offer a unique window to the world, last week we announced an update to our Google Trends platform. The new Google Trends provides journalists with deeper, broader, and real-time data, and incorporates feedback we collected from newsrooms and data journalists around the world.

Lastly, Google is introducing new programs focused on the future of media. The company is partnering with San Francisco media startup accelerator Matter, as well as Hacks/Hackers, a community group built for both developers and the people who write about them.

One of the opportunities we’re focused on is increasing the number of media startups in the marketplace. We’ve launched partnerships with Matter, a media accelerator in San Francisco, and Hacks/Hackers, a global community group for developers and journalists, to provide financial support and mentorship from Google engineers that will help these organizations expand their impact to more startups around the world.

Interestingly, there might just be a fourth tentpole here. As was mentioned at the SearchMetrics SEO blog (via SearchEngineLand), it looks like Google might be boosting the SEO ranking of news websites across the Internet. The Wall Street Journal, USA Today, Business Insider, Time, TechCrunch, Fox News, and more are all seeing huge jumps in SEO visibility in recent weeks.

As you can see, the list mostly consists of well-known media websites publishing fresh and newsworthy content on a regular basis. In most of the cases, the respective URLs of these domains regarding their winner keywords have hit the top rankings out of nowhere.

Here’s a look at some of the more obvious boosts across the board:

While we don’t have an official announcement from Google at this point, it seems clear that some news websites are seeing some pretty big jumps. Maybe Google is trying to give media-related and journalistic websites a little push beyond the initiatives it announced today.