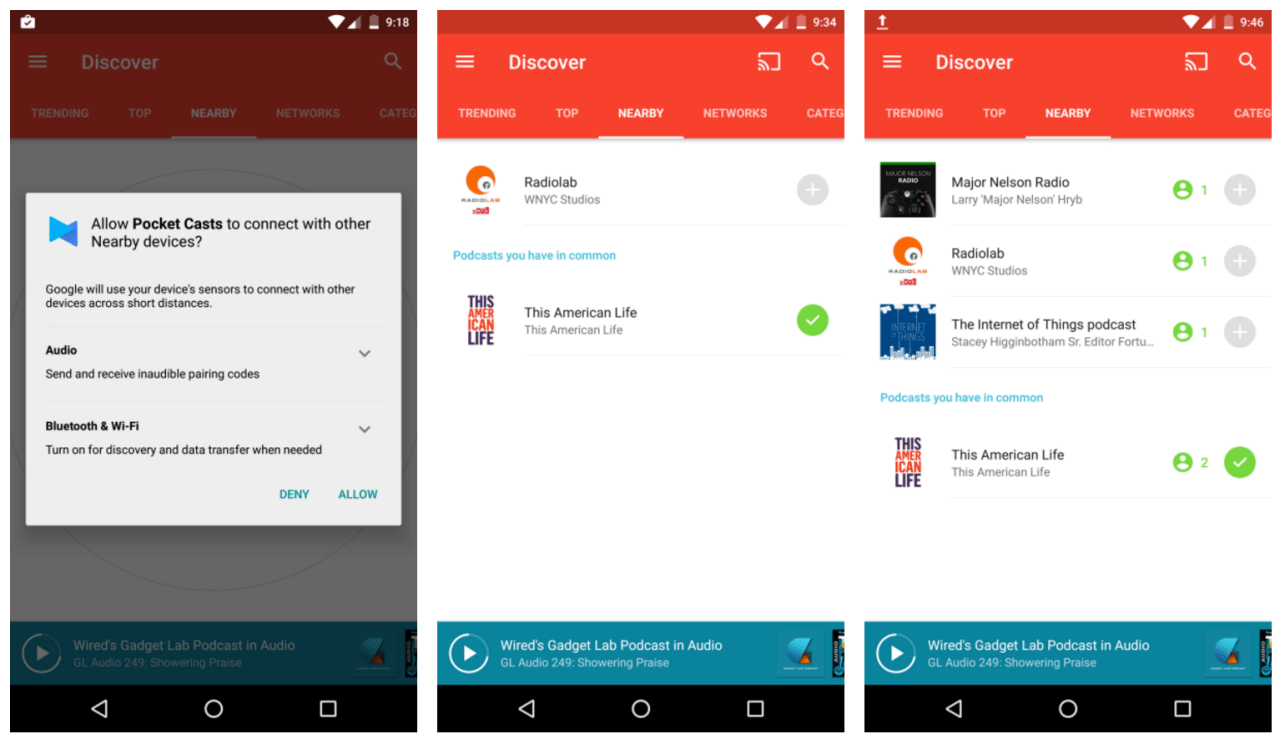 Pocket Casts, the popular podcast player for iOS and Android, has been updated on Android to take advantage of Google’s new Nearby technologies for enabling interactions between devices within a close proximity of one another.

Tapping the newly added Nearby tab inside Pocket Casts brings up a permission prompt requesting access to the device’s microphone, speakers, and Bluetooth/WiFi. The Nearby Messages API, one of two APIs which make up Nearby (both live on Android now, while Nearby Messages but not Nearby Connections will be available on iOS soon), uses the emission of sounds inaudible to humans but recognizable to hardware microphones to identify devices within range of a few feet. Once the permissions are granted, users will be able to see the content that other nearby Android Pocket Casts users are listening to, and easily subscribe to those shows. Google already uses the same inaudible sound technique in Chromecast and its Tone extension for the Chrome browser.

While the process of actually enabling Nearby and discovering what local Pocket Casts users are listening to is easy, there are some friction points to it all. Namely, Nearby doesn’t broadcast all the time — you have to have the app launched on your device and be inside the Nearby tab for the content you listen to be discoverable by other nearby podcast junkies. And it’s synchronous, meaning nobody around is you going to see your podcasts unless they’re in the Nearby tab at the exact same time. It could prove an easy way to explicitly share a podcast you want a friend to check out with them next time you meet up, but other than that, what are the odds you’ll open the Nearby tab and actually see content in there? Pocket Casts is popular but far from ubiquitous.

I can still see a lot of potential in Nearby for situations where it could enhance and improve a face-to-face interaction, like collaborative presentation creation — just maybe not for a use-case like this.