Yesterday Android communities around the web were ablaze with discussion surrounding a flaw in the design of the stylus eject mechanism in Samsung’s new Galaxy Note 5 smartphone. Put simply, if you insert the S Pen stylus into the device slot from one end, all is well. Accidentally insert the pen from its opposite end, however, and risk permanently breaking functionality key to the Note 5’s power-user selling points — the device will no longer detect when you remove the pen. Samsung has responded quite bluntly.

In a comment to The Verge, the company essentially says that owners should just insert the S Pen from the end they want you to:

“We highly recommend our Galaxy Note5 users follow the instructions in the user guide to ensure they do not experience such an unexpected scenario caused by reinserting the S pen in the other way around.”

Here’s our explanation of the problem from yesterday (emphasis mine):

While the obvious solution to this problem is to not insert the Pen backwards, it’s a common mistake that will likely plague a decent amount of Galaxy Note 5 users. The biggest problem is that the Pen goes in backwards with zero added force, meaning that it’s incredibly easy to mindlessly put it in the wrong way.

From these comments it doesn’t appear that Samsung has any intention of recalling customer devices or fixing the problem in new units in any way at all. It also seems, however, that the company was well aware of this problem before the phone’s consumer release, since a cautionary warning about the issue is right there in the device’s user manual (we haven’t been able to determine whether or not the manual included this prior to the controversy or was updated afterwards): 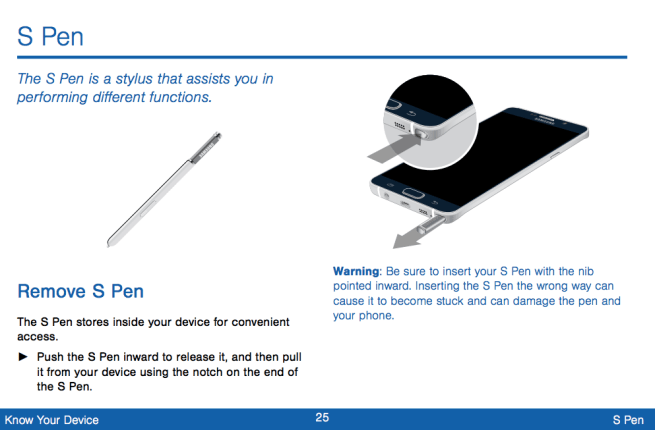