Google puts a lot of effort into making the world’s knowledge organized and accessible, and in particular it has a record through its Crisis Response project of making certain information more accessible during times of disaster. Today it released a blog post detailing how it’s doing more to help people be prepared.

“As the U.S. enters hurricane season again, Katrina remains a stark reminder of the devastation a storm like that can cause,” Google says in its post. “We want to be as prepared and as helpful as possible for the next one—no matter where it hits, or how big it is. So we’re always working to improve our Crisis Response efforts to help people stay safe and informed during these events.”

With that, Google shared improvements it’s made in Search to both its weather forecasts and its Public Alerts system meant for disseminating emergency messages. Searching for information on a particular storm or tornado may now return one or all of these: 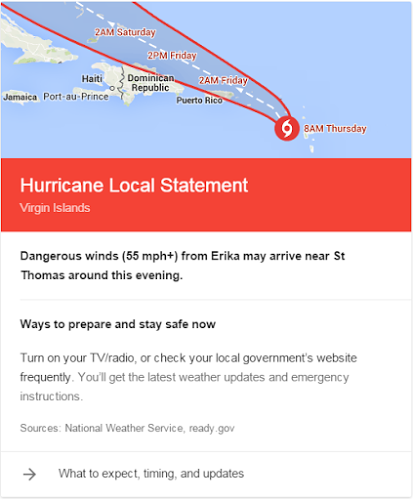 As that last bullet-point says, Google will keep its information regarding any particular storm, like preparedness recommendations, up-to-date and relevant based on context — where the storm is relative to your location and its intensity. If the storm is days away from touching ground, Google might tell you to begin preparing an emergency kit. Hours away and Google may tell you how to avoid injury from fast-moving objects and debris.

“Not every storm is as devastating as Katrina was, but they all have the potential to cause damage, disrupt lives, and uproot communities,” the company said. “By providing useful, accurate, early-warning information, we want to do our part to help people prepare. More information won’t stop natural disasters from occurring, but it can go a long way to keeping people safe, and in some cases, could even save lives.”