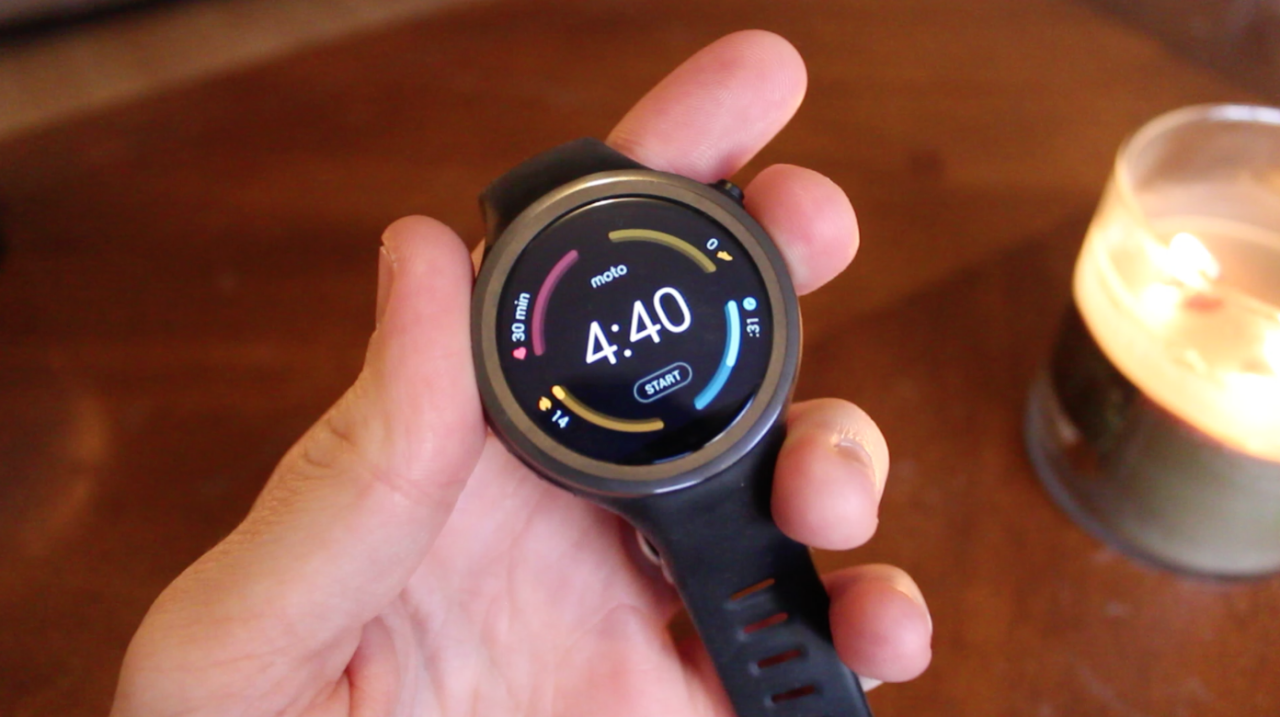 Compared to the dozens of other Android Wear watches we’ve seen over the last couple of years, the Moto 360 Sport is both different and the same. It’s different because, unlike the more popular classy offerings in the form of the Huawei Watch, the Fossil Q, the Moto 360 (2nd gen.), and others, the Moto 360 was made from the ground up with an active lifestyle in mind. It’s the same, however, in pretty much every other way imaginable…

The Moto 360 Sport, which launched a few months ago, has been designed to hold up to physical activity, and that was obvious in my week of using the watch. The bands are made of silicone for comfort and to prevent sweat nastiness from building up. I found them very comfortable, and only noticed occasional buildup around the band’s clasp. As you can see, its overall appearance is very sporty as well. Unlike many other Android Wear watches, the band wraps around the watch’s body to make it one singular unit. You can’t swap bands at all, so picking the right color — of which there are three — the first time is critical.

The watch has a 1.37-inch LCD-based round display with a technology that the company calls “AnyLight”, which is designed to be visible in a wide variety lighting conditions. And based on my own testing, it’s true: the watch did a great job of adjusting its display depending on the ambient light. I’ve been wearing the Huawei Watch for several months, and the difference was very noticeable outside — although I definitely prefer AMOLED indoors. This display has a pixel density of 263 PPI and a resolution of 360 x 325, and like all Moto 360 watches, the device is round and has a built in heart-rate monitor (that I found to be faster and more accurate than others I’ve used).

The star of the show here, as I mention in the video below, is the inclusion of GPS and an array of fitness-focused software features. The GPS can map your runs with its built-in Moto Body app, or you can even use third-party apps like Runkeeper with not much extra effort. The device also has a barometric altimeter to measure elevation, a pedometer, an accelerometer, and of course much of the other internal hardware that can be found on the regular 2nd generation Moto 360.

If you’re looking for the full specs:

As someone who — like I said — has been using a Huawei Watch (the standard one with black leather band) for several months, the first thing that really struck me about the Moto 360 Sport was its silicone band. I’ve never consistently worn an Android Wear watch with a silicone band up to now, and the difference in comfortability — even without going on a single run — has changed things a little for me. I used to get annoyed with watches getting in the way when writing on my laptop (something that I admittedly do much more than the average person), but the silicon actually provided a nice padding that made me forget the watch was there.

On top of that, this was actually the first time that I had used a Moto 360 with its wireless Qi charging dock. It sounds crazy that I had never owned a Moto 360 until now, but I was perfectly content with my original LG G Watch R, and then followed up with a Huawei Watch. Neither of those devices had wireless charging, and that has also changed my relationship with smartwatches. Our own Seth Weintraub has mentioned many times the strategy of throwing the watch on the dock in the morning while showering if you forget to charge up overnight, and I found myself doing that for the first time with this watch. Having to keep track of a cable and a finicky dock is an unnecessary pain.

The software features leave some to be desired, and that’s coming from someone who’s not even a fitness fiend. The GPS works, the run tracking Moto Body app works, and the Sport watch face is nice for making sure that you’re getting at least a little bit of exercise in your day, but the watch doesn’t feel to me to offer enough on top of the standard subset of Android Wear features to really qualify as a true fitness-focused device. It’s more of a Moto 360 with a mask on. There’s no sleep tracking features, and there isn’t much support for anything other than runs and just overall daily activity. There isn’t support for biking, hiking, or swimming. It’s not much more useful for fitness than just using a Fitbit.

But the thing is that it does have all the features that you find on a normal Android Wear watch. The Moto 360 Sport may not have a week (or even two full days) worth of battery life, but how many of Fitbit’s activity trackers can tie in with your Hangouts app? How many fitness trackers let you see your Discover Card balance? How many fitness trackers let you call a Lyft straight from your wrist? It’s not an amazing fitness device, but the tradeoff is that it is an Android Wear device. And for someone like me, that isn’t always at the gym (although I probably should be), what the Moto 360 Sport offers is more than enough to satisfy.

Sadly, though, the advantages that come with it being an Android Wear device are still limited. I wrote 6 months ago that I still didn’t have a reason to use Android Wear. Well, guess what? I still don’t have a reason to use Android Wear. I have to admit that after a full week of using the watch (every day, I might add, which is a feat for me), I thought that maybe this would be the one. Maybe this would be the watch that had the perfect balance of features and comfortability to make me wear a watch every day. Perhaps I’m just not a watch guy, but I stopped wearing the watch on the eighth day. I waited 3 or 4 days to see if it would begin calling my name again, but it just didn’t happen. Android Wear still — at least for someone like me that works from home — just doesn’t bring enough to the table.

Still, I would say that — from what we’ve seen so far — the Moto 360 Sport is the best fitness option so far to run Google’s watch operating system. And that brings us to the price. Amazon is currently offering the device at around $280, which is $20 less than its retail $300. That’s too much, in my opinion, for any Android Wear watch. But it’s not terrible. It’s the same price as the 2nd generation Moto 360, and right around the same price as the Huawei Watch and other 2015 offerings. At this price I would probably just hold off for a while, but even if you don’t the Moto 360 Sport is a solid watch. At the very least, it’s not worse than the regular Moto 360.