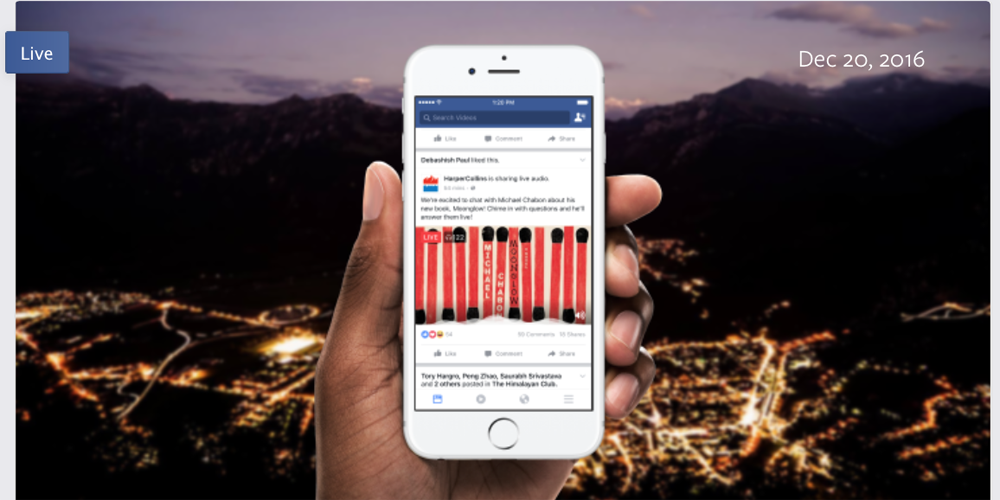 Almost a year after adding Live Video to its app, Facebook has announced that it is introducing a Live Audio feature that allows live broadcasts of audio-only content. Or, as CNET wryly described it, radio.

Initially, the company will be testing the feature with a small number of established broadcasters – including the BBC World Service and LBC – though publishers and authors will also be getting in on the action …

Facebook says that Harper Collins, and authors Adam Grant and Brit Bennett will be taking part in the trials over the next few weeks.

Android users get a better deal than iPhone owners: you can continue listening to a Live Audio broadcast when using other apps, while iOS users will need to remain within the app.

If you fancy yourself as a live radio host or live podcaster or whatever label will end up being applied to the live audio broadcasts, the company says that it will be making the feature more broadly available to publishers and people early in the new year.

You can read the full text of the announcement below.

As we continue to improve the Facebook Live experience, we’ve been listening to feedback to inform the new tools and features we build. One thing we’ve heard is that partners want new formats for going live. We announced Live 360 last week, and today we’re excited to announce another way to go live on Facebook: Live Audio.

We know that sometimes publishers want to tell a story on Facebook with words and not video. We’ve even seen some Pages find creative ways to go live and reach audiences with audio only by using the Facebook Live API or by adding a still image to accompany their audio broadcast. Our new Live Audio option makes it easy to go live with audio only when that’s the broadcaster’s preferred format.

We also know that publishers sometimes go live from areas that lack strong network connectivity. Though we alert the broadcaster if their signal is low, Live Audio presents another option for connecting with audiences in real time from low-connectivity areas.

From interviews to book readings, we’re excited about the layer of interactivity that Live Audio brings to both the broadcaster and listener. Just as with a live video on Facebook, listeners can discover live audio content in News Feed, ask questions and leave reactions in real time during the broadcast, and easily share with their friends.

Over the next few weeks, we’ll be testing Live Audio with several partners, including BBC World Service , LBC, Harper Collins, and authors Adam Grant and Brit Bennett. Early next year, we plan to make this new format more broadly available to publishers and people.