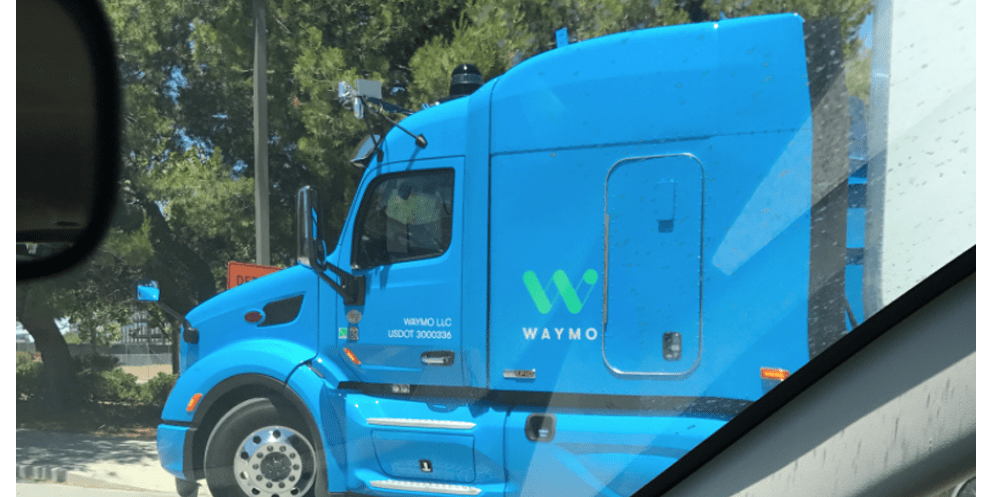 A report out of BuzzFeed News at the beginning of this month said that Alphabet’s Waymo was in the early stages of exploring self-driving trucks, and now (via Jalopnik) we have our first peek at one of those trucks out on public roads. The truck sports an appropriate light blue color, the Waymo insignia, and of course the self-driving hardware suite.

The report from earlier this month confirmed that Waymo was manually driving just one truck on public roads to collect data, and while it’s unclear how the project has evolved in the last couple weeks, this photo seems to be of that one truck — apparently a Peterbilt 579. It’s perhaps possible that the company has moved beyond collecting data in the last couple weeks to actually letting the rig drive itself in some limited capacity, but there’s no official word from Waymo on that.

As Jalopnik points out (the site says that these photos were sent to them by an anonymous source), the trucks have a very similar setup to that which can be seen on the company’s Chrysler Pacifica minivans. There’s a large LIDAR, a pair of ultrasonic sensors, and what appears to be a radar up front. It’s entirely possible that there are other sensors rigged up on the truck, but our view of things is limited to just a few smartphone shots. Waymo’s experimentation with self-driving trucks is interesting, especially when you consider what’s going on with the competition as of late. Otto, another self-driving truck startup founded by ex-Waymo employee Anthony Levandowski and later purchased by Uber, has left the ride-hailing flailing in its self-driving efforts. Waymo took Uber to court earlier this year accusing Uber of acquiring Otto as a means to get its hands on proprietary self-driving technology that was stolen by Levandowski. Levandowski was recently fired by Uber.

The latest development in that unfolding drama showed that Uber ex-CEO knew Levandowski had ‘discs’ containing Google data as early as March 2016 and that now-ex-Uber CEO Travis Kalanick was aware of them before acquiring Otto in the summer of 2016.

In its efforts to move self-driving cars into the mainstream, the Alphabet division recently signed a deal with Lyft which will likely involve pilot projects and other product development efforts. Details on the partnership aren’t clear at this point.