Review: ASUS ZenFone AR is a great showcase for Tango and other half-baked software [Video] 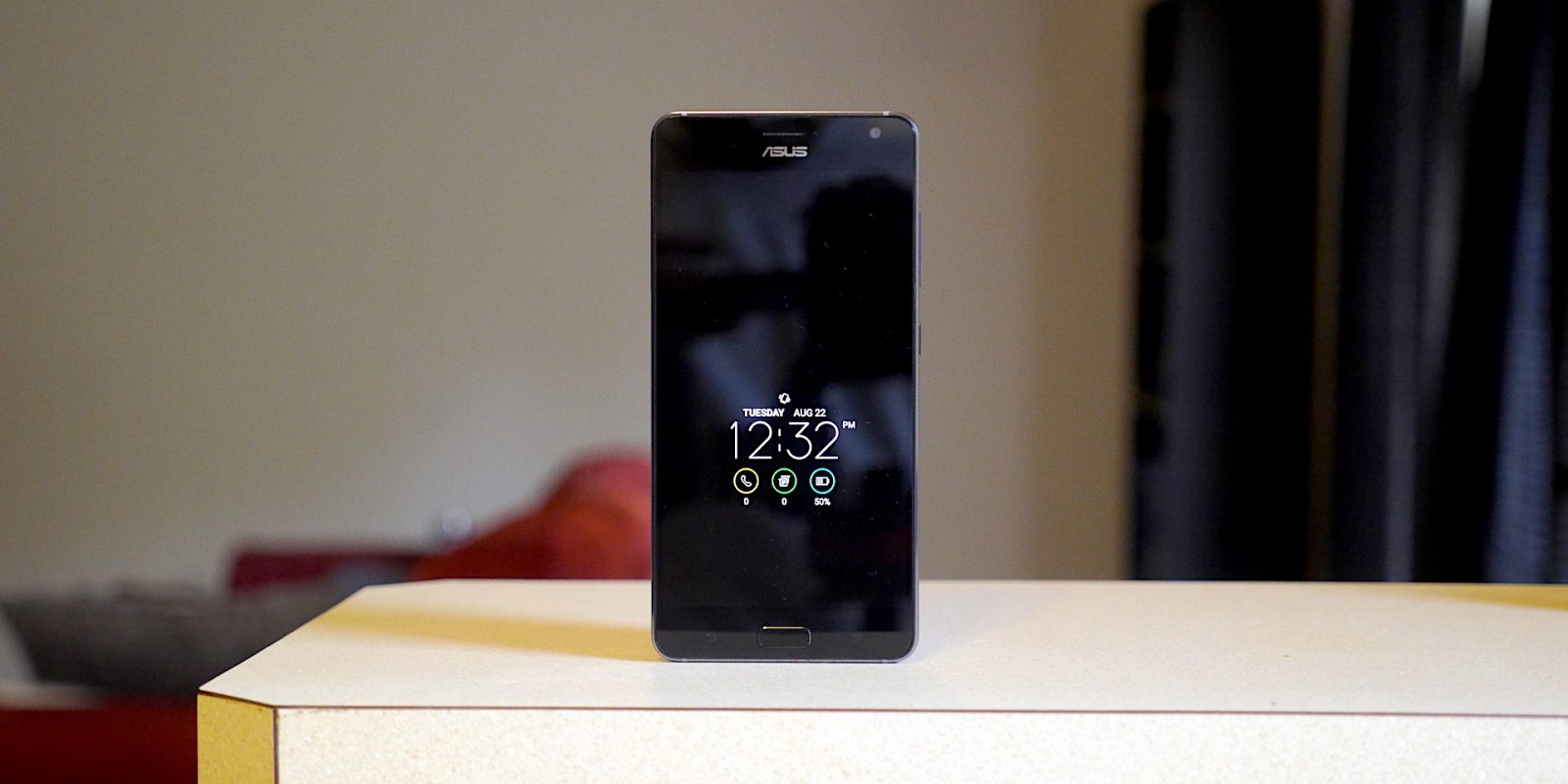 When it comes to Google’s Tango platform for augmented reality (formerly known as Project Tango), there aren’t a whole lot of options. In fact, up until now, the Lenovo Phab 2 Pro was the only device that supported Tango, but ASUS announced its own entry into the AR front with the ZenFone AR earlier this year at CES 2017.

Skip forward half a year, and the ZenFone AR is finally available to the masses, and even has backing from a major US carrier. Combined with its support for Google’s Daydream VR platform, the ZenFone AR could potentially be the darling phone for altered perception enthusiasts, but a proof of concept device may not be the best option for most people.

If there’s anything to be said about ASUS’s design language, it’s that it’s consistent. The ZenFone AR looks a lot like every other ZenFone we’ve seen, and that isn’t necessarily a bad thing. It’s well-built, with aluminum sides and a faux-leather backing that isn’t fragile like glass and doesn’t disrupt wireless charging like metal — though the ZenFone AR doesn’t support wireless charging anyway. While we’re on the topic of missing hardware features, it’s also not in any way water-resistant, so you’ll want to keep the ZenFone AR away from bathtubs or swimming pools.

At 9mm (o.35-inches) thick and 170g (6 ounces), the ZenFone AR isn’t the slimmest or lightest phone on the market, but that’s a fair trade-off considering it houses support for both Tango AR and Daydream VR, and it’s still entirely manageable. Lining the bottom of the phone you’ll find a headphone jack, a USB-C port, and an impressively loud and decent-sounding speaker.

The power and volume buttons along the phone’s righthand side are nice and clicky, and the same can be said about the physical home button. Fans of on-screen controls may not appreciate the home button, but it at least doubles as a fingerprint sensor for quick authentication. What drew much more negative attention for me was the phone’s insanely loud and harsh vibration motor, which can be disabled entirely but isn’t adjustable otherwise. 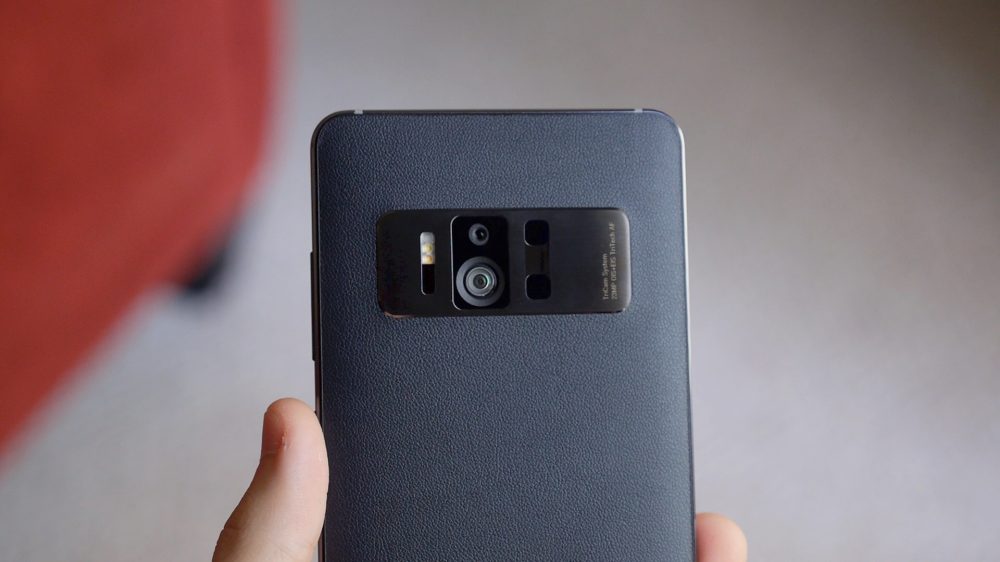 Powering the phone is a quad-core Snapdragon 821 chipset with an Adreno 530 GPU. While it isn’t the newest processor around, the 821 still handles everyday tasks and AR apps alike with ease, and the ZenFone AR rarely showed any hesitation or stutter.

Regardless of which spec configuration you buy, the best part of the ZenFone AR is easily its display. The 5.7-inch QHD Super AMOLED panel is bright and vibrant, and it’s protected from scratches with Corning Gorilla Glass 4. I really enjoy the punchy colors from the default Super Color profile, but those with a preference for more accurate colors can switch to the Standard profile, or even manually adjust the color temperature to get exactly the right look. There’s even a fully adjustable blue light filter to help ease eye strain.

Tango really needs to be your top priority for this phone to be worth recommending.

Reviewing the software on an ASUS phone feels a lot like grading a test from a student who didn’t study beforehand … or who accidentally studied chapter 2.3 when the test was actually on chapter 7.1.2. Zen UI runs on top of the already-dated Android 7.0 on the ZenFone AR, and stands as one of the most heavily customized software overlays with little to no benefit to the user.

The ZenFone AR comes loaded with dozens of pre-installed apps, and the UI itself is bulbous and cartoony at every turn. The long-press menu on the home screen mostly consists of redundant shortcuts to settings that can be more quickly accessed elsewhere. The Home Edit panel feels straight out of the Gingerbread v2.3 days. The always-on display, usually one of my favorite features on modern Android phones, feels utterly useless since it doesn’t show any notifications beyond battery percentage and missed phone calls and texts.

To ASUS’s credit, ZenUI is extremely customizable. You can apply icon packs and themes, change home screen page transitions, adjust grid size, and much more, but these features are all available on phones from Samsung and LG with much better UIs, and can even be brought to stock Android devices like the Google Pixel using a third-party launcher. 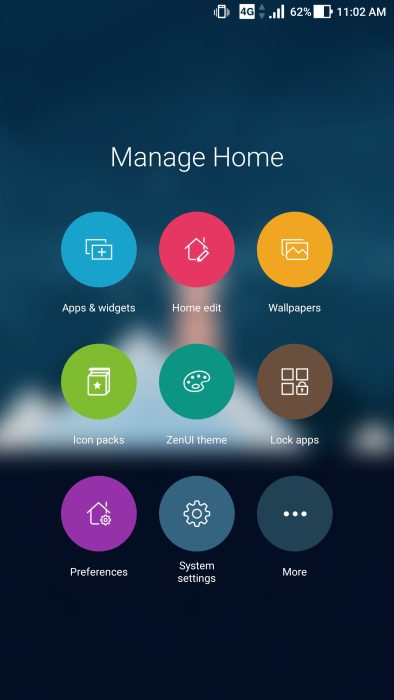 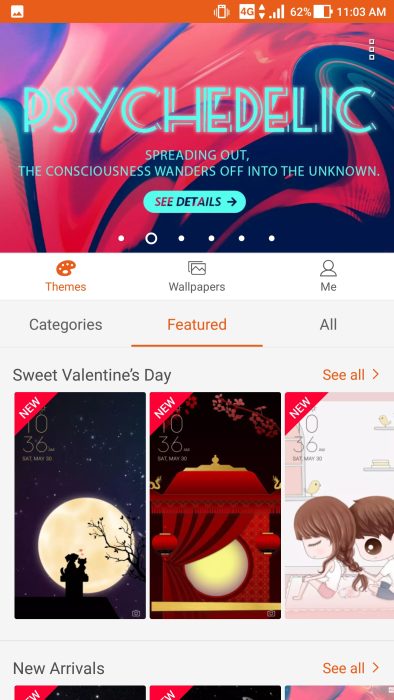 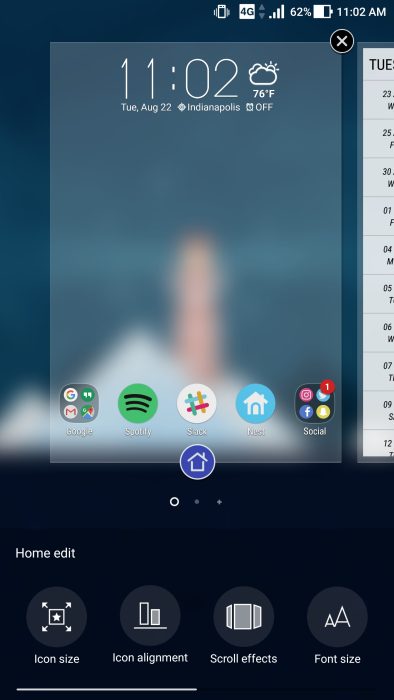 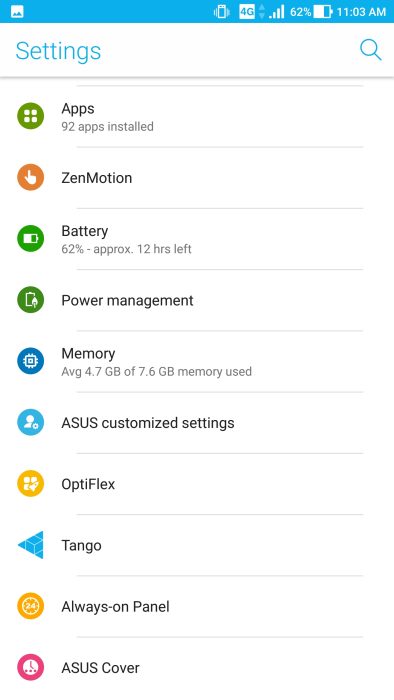 I’ve also been having severe issues with the camera software on the ZenFone AR. All throughout my testing and even after a software update, the camera would often freeze up for five to ten seconds, force close, and stop working altogether — sometimes returning after a few minutes, other times after several hours. At first I thought it might be an issue with the default camera app, but the issue persisted when using third-party apps like Snapchat and Instagram as well. Hopefully it’s an isolated issue and I’ve just been using a faulty unit.

It’s a shame I’ve been having so many problems with the camera, because the 23 MP primary sensor on the back of the phone is actually excellent when it works. It’s sharp, fast to focus, and colors look very true to life, if not a little on the warm side. Thanks to a combination of optical (OIS) and electronic (EIS) image stabilization, it’s also very steady, and helps to reduce image blur resulting from shaky hands.

Like the rest of ASUS’s software, the viewfinder app is packed full with far too many menus and settings, but some of them are actually pretty useful. The Low Light mode in particular dramatically improves dark shots by reducing the resolution and imposing a 4:3 crop in exchange for more light intake, creating a genuinely brighter and cleaner image.

The most prominent apps highlighted in the Tango hub all pertain to one theme: shopping.

Of course, the namesake of the ZenFone AR is its augmented reality capabilities with Google Tango. The massive camera strip on the back of the phone houses ASUS’s AR-focused TriCam System, consisting of the primary 23 MP sensor, a smaller second camera above for motion tracking, and a third camera to the right for depth sensing. Using all three cameras, the ZenFone AR is able to make a 3D model of the room around you to be used with Tango apps.

Within the Tango hub, you’re able to find a variety of new AR apps, ranging from games to tools like Google’s own Measure app, which allows you to measure real-world objects with impressive (though not perfect) accuracy.

Games like the pre-installed Slingshot Island combine the motion tracking and depth sensing abilities by placing a floating island in the room and having you back up to launch a slingshot at obstacles to destroy targets in a move ripped straight from Angry Birds. 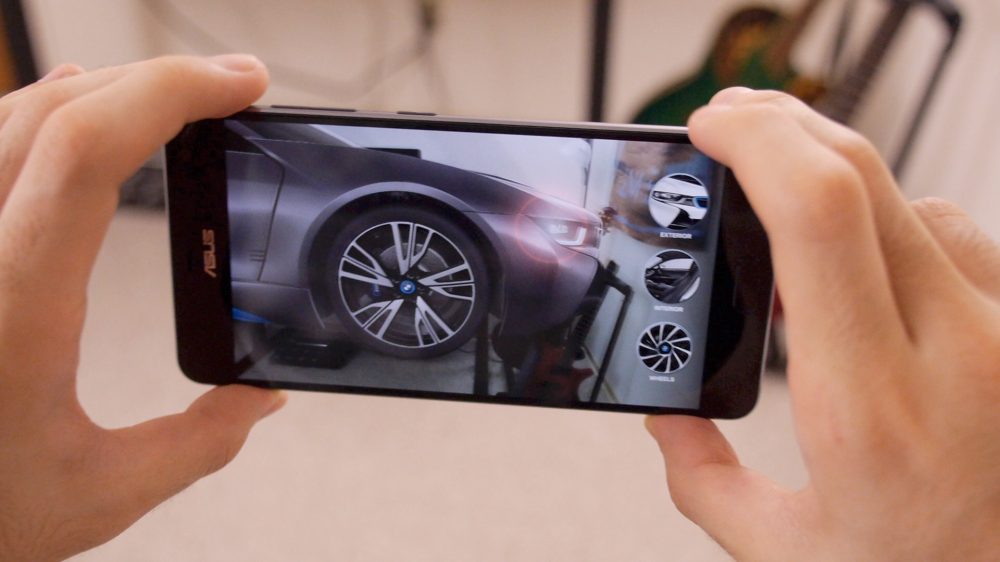 The most prominent apps highlighted in the Tango hub, however, all pertain to one theme: shopping. Wayfair, BMW, and Amazon are just a few of the brands whose AR apps place their products directly in your room to get a feel for what they’d look like and the space they’d take up. It’s useful, don’t get me wrong, and super cool at times; the BMW app is absolutely horrible at tracking, but if you can get it working enough, you can place an i3 or i8 in your room and do everything from popping the trunk and opening doors to sitting inside and even turning on the windshield wipers.

Most of the apps work pretty well, and after renewing the lease in my still largely-unfurnished apartment (because I prioritize tech and music gear over basic human comforts), I especially enjoy that the Wayfair app gives me an interactive new way to shop for furniture, but I’d be more keen to revisit Tango when it feels less like just another way to put ads in my face.

Though not as disappointing as the software, the ZenFone AR’s battery life doesn’t quite live up to the high expectations that its 3300 mAh rating might set. In general, it should be enough to make it through the day with light usage, but if you spend a lot of time scrolling through Twitter or otherwise keeping your screen on, your battery will probably start looking a little peckish by dinnertime. 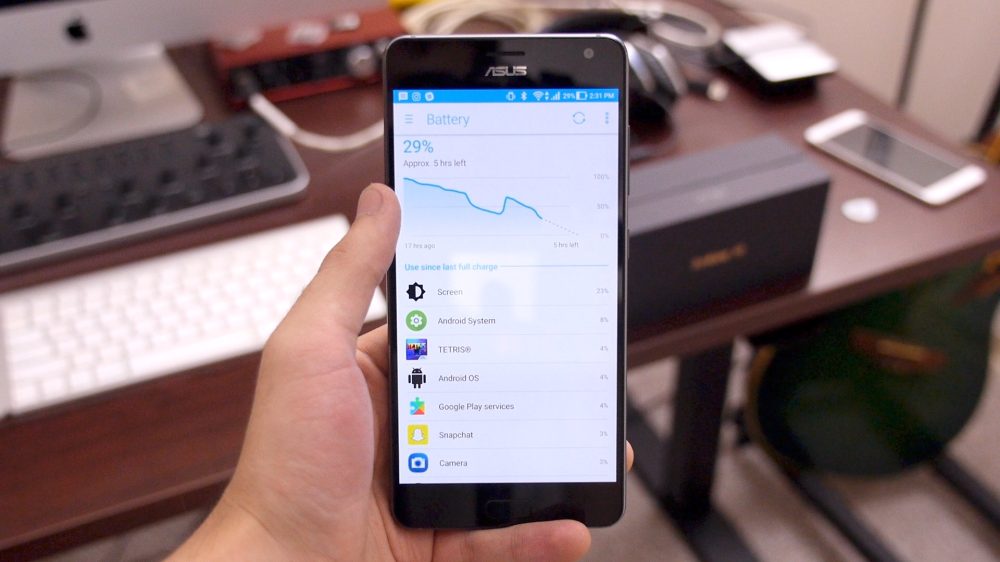 Fire up a few Tango apps, and the battery drain increases tenfold. After just half an hour of playing around in Slingshot Island, Amazon, and Wayfair, my battery had drained by 35%. Luckily the ZenFone AR is Quick Charge 3.0 compatible, and the BoostMaster fast charger included in the box can restore 60% battery capacity in about 40 minutes.

Available at Verizon Wireless for $27/month or $648 retail (or available unlocked elsewhere), the ZenFone AR is cheaper than the Galaxy S8, but it’s still priced above other high-end devices like the LG G6, OnePlus 5, or even the Google Pixel (which Verizon is currently selling at a reduced price). In offering Tango and Daydream compatibility, it has an experimental leg up on the competition, but for most people, that just won’t be enough to look past the rest of the phone’s shortcomings.

Overall, the ZenFone AR feels just as incomplete as Tango itself. It has the potential to be a great phone, but at every turn it’s missing a hardware feature or desperately in need of new software. The ZenFone AR is a big step forward for Tango, but that really needs to be your top priority for this phone to be worth recommending.