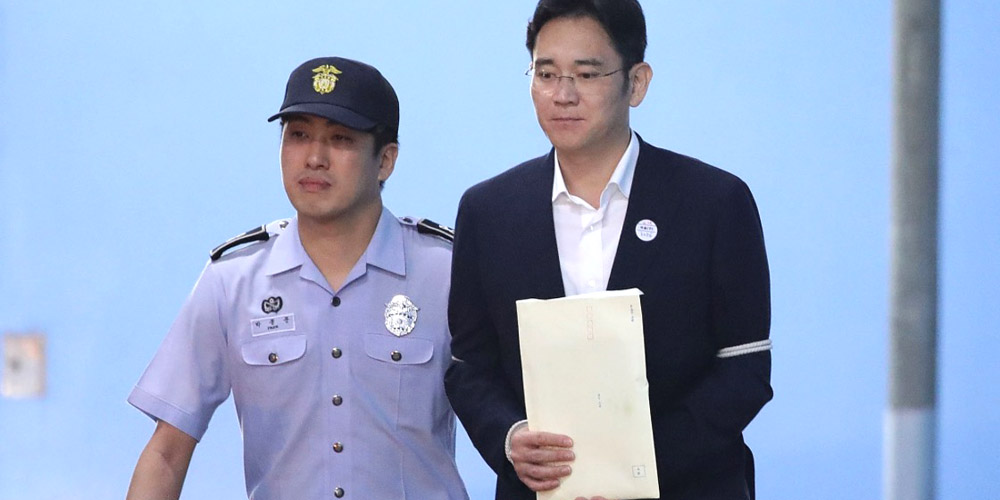 Lee Jae-yong, the de-facto head of Samsung’s business empire, has today been convicted on corruption charges and sentenced to five years imprisonment. He was found guilty of bribery, embezzlement & perjury, reports the NY Times.

The court ruled that Mr. Lee and four other Samsung executives paid $6.4 million in bribes and other inducements to ensure that the country’s disgraced former president, Park Geun-hye, supported a complicated corporate deal that strengthened Mr. Lee’s grip on Samsung Electronics, the conglomerate’s crown jewel […]

Mr. Lee was also found guilty of hiding assets overseas and of perjury for falsely testifying at a parliamentary hearing on the scandal.

The convictions are the second major hit to Samsung’s reputation after the disaster of the exploding Galaxy Note 7. The judge said that the ethics of the company as a whole had been thrown into question.

Through this case, the people have come to question the fairness and honesty of the president and have come to distrust the ethical values of Samsung, the largest conglomerate.

It’s not the first time the family has been found guilty of corruption: Lee’s father, Lee Kun-hee, was twice convicted of tax evasion and bribery.

Although Samsung is a massive component of South Korea’s economy, and has traditionally been seen as a very prestigious employer, the NY Times suggests that its future is under threat.

The verdict sends the strongest message yet to South Korea’s big, family-controlled businesses that their more than 60 years of economic dominance in one of the world’s most successful economies is under threat. Those companies helped build an economic powerhouse out of the ashes of the Korean War. Today, they are widely seen as sources of corruption and impediments to the country’s progress.

It notes that the public mood shifted in the wake of the impeachment of the country’s president on related corruption charges.

In the wake of the corruption scandal — which led to the impeachment of Ms. Park — the current president, Moon Jae-in, campaigned on holding South Korea’s corporate empires to account.

The conviction comes at a particularly bad time for Samsung, just days after it announced a new flagship product, the Note 8.