Update: We’ve now been provided an additional image of the Pixel 2 shown in these photos, proving that the Pixel 2 in “Kinda Blue,” which was revealed in a press render, is this same device. It just so happens that the lighting for these photos was not that great. The headline has been updated to reflect this. Here’s the first real-life look at the bottom of the device. There is a case wrapped around the device that we blurred out (as in the above image) because it could potentially identify our source.

With the release of the second generation Pixel phones drawing ever nearer, there aren’t many details about the Mountain View company’s forthcoming flagship handsets that we haven’t heard already. But 9to5Google has now obtained some new images of the smaller non-XL model from a trusted source, alongside a few little tidbits about the phone that haven’t been reported up to now…

While both in-the-flesh leaks of the smaller Pixel 2 up to now have shown the aluminum black model with a black glass top-third, we’ve been provided a new image showing a device with a slate gray-looking glass window and a dark silver back. The device we’ve seen in two images, both of which we’ve heavily blurred and obfuscated to protect the identity of our source, also has a black front. While we can’t say with certainty that this is a color that will be shipping come later this year, it’s at least being tested internally.

This is the first time we have been able to clearly see the two small black dots below the camera’s flash that assumably are the “receive” and “send” sensors for the laser detect autofocus. As we’ve seen previously (and our source has confirmed) there is a small microphone hole at the top of the device.

On the topic of storage for the new Pixels, we can independently corroborate previous reports that both 64GB and 128GB models do exist. It’s possible that 64GB could be the new base storage option with this year’s iteration since we’ve yet to hear about any models with less than 64GB, and as we reported way back in January, the phones are expected to be slightly more expensive than last year. 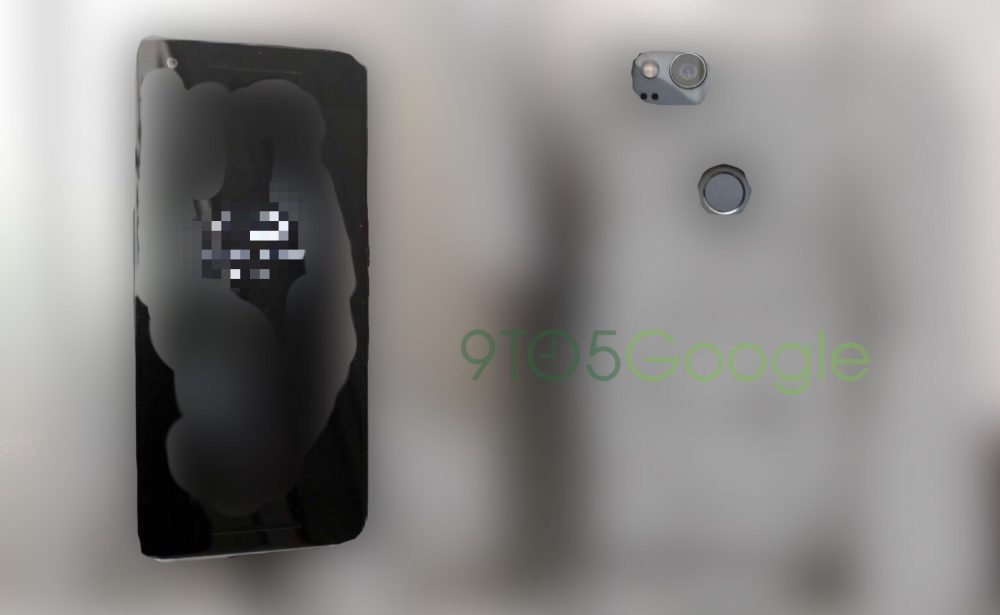 Truly sorry I can’t show you the full-res images, because they’re beautiful

We can also independently corroborate other details about the smaller Pixel 2 that have been reported previously. This smaller Pixel, codenamed “walleye,” looks like the many leaks we’ve seen already — bearing a design very similar to last year’s model. This means, yes, it will have the same larger bezels surrounding a marginally smaller 4.97-inch 1920 x 1080 display. As we reported first in March of this year, there will be no 3.5mm headphone jack on the device, with Google instead opting to add front-facing speakers.

On the note of the headphone jack, however, we’re told by a different anonymous source (with a good but imperfect track record) that there is a lot of talk happening internally regarding damage control for removing the port. We’re told to expect some “nuanced answers” in the coming weeks, but it’s unclear what that means. Perhaps Google intends to pitch Assistant-powered headphones as a trade off. We are entirely confident, however, thanks to the source that provided the above images, that Google has prepared a USB-C to 3.5mm dongle which will assumably ship with the phone in the box.

On another note, we’ve now been told by two separate sources that both Pixel 2 models will have improved water and dust resistance, as I first said way back in January. One source, familiar specifically with the LG-manufactured Pixel XL, has told us that the devices will be “waterproof,” while the source that provided the images you see in this post says that both devices will be rated IP68. It seems pretty likely to us that IP68 is the rating that these devices will carry.

Unfortunately, we don’t have any new details on the camera, other than to say that the source that provided us with these images says that the phone is sticking with EIS. This person also reiterated what we heard earlier this year: low-light performance is a primary focus. The person also says that, with the exception of the display, both devices will have identical specs — just like the original Pixel.

Finally, for some software tidbits. We were provided an image of the device’s ambient display turned on, but as you can see above (on the left), we blurred it out in an abundance of caution to protect our source’s identity. We can describe a couple of things about it, however; there is a new line below the time for the date and an alarm (if you have one set), and the large font for the time is slightly tweaked.

Also on the note of the ambient display, we’re told by one separate source, as was first reported in July, that there will indeed be an always-on option for the ambient display. The current Pixel’s ambient display is off unless you pick up the device or double tap the display when off. We’re told by that same source that Google Lens (which is nearing release as seen in Google app 7.11) will be launching publicly with the Pixel 2, and that the phone will likely be running Android 8.1 at launch.

Finally, a trusted source says that accessory manufacturers have PR embargoes for Pixel 2 products until October 5th, the same day that Evan Blass originally reported that the phone will launch.

Know anything about the Pixel 2? You can DM me on Twitter or send me an encrypted email.