Announced in 2016 and first showcased within Google Allo, App Preview Messaging lets you receive messages from third-party services even when the app isn’t installed on your device. Spotted in use by Duo last month, Google Photos now appears to be the latest app taking advantage of this functionality.

App Preview Messaging is particularly powerful as it is built into Google Play services, and thus available on the majority of Android devices. With Allo and Duo, it allows users to receive text and video messages from anyone, as well as natively respond and even enter a video call.

The developer API is still in preview, with Google launching an early access program to work with select partners.

Google now appears to be testing App Preview Messaging with Google Photos to share previews of images and videos. The example we’ve encountered could possibly be a bug given that Photos is already installed on the device. That said, the notification does say “Open App” which would suggest that this would appear even though the appropriate app is installed.

Regardless, the underlying functionality stands and appears to allow Photo users to share images and videos, as well as a preview, with those that don’t use the Google service. 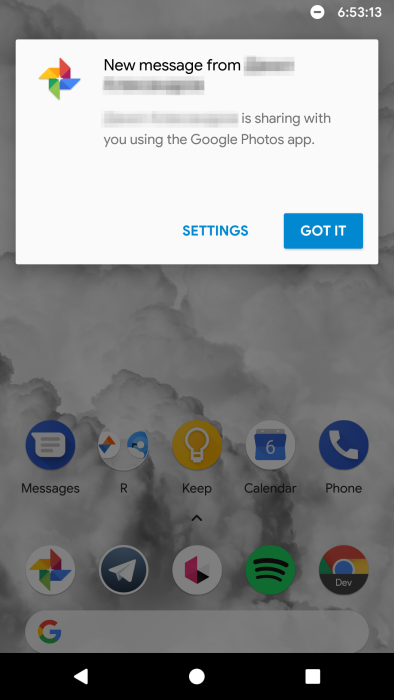 When you use it for the first time, a dialog will let you know that another user is sharing a photo or video with you. You can go to Play services settings to disable this functionality or tap on “Got it” to open the notification panel.

Users will then see a large preview of the shared content, with videos playing right from this view. From this pane, users are also able to open the full Google Photos app.