Google blocking uncertified devices from using ‘GApps,’ but custom ROMs can be whitelisted

Android is a powerful mobile OS, but what really makes it what it is today is Google’s suite of applications. “GApps” as they’re commonly referred to, are a collection of apps that live at the core of Android to make it better. Users know the value of Google’s apps on Android, and that’s why the company has requirements on which devices can pre-load that suite. Now, though, Google is making those restrictions a bit tighter…

Generally speaking, OEMs comply with Google’s requirements and legitimately pre-load GApps on their devices. However, in some cases (especially with smaller OEMs), they don’t go through the certification process and pre-load GApps anyway. This doesn’t cause much trouble to the end-user, as the apps still work, but it ignores Google’s requirements. In some cases, these companies are even shipping phones without GApps with instructions for the user to sideload them.

Clearly, this is a loophole that needed to be fixed, and it appears Google has done just that, as pointed out by XDA-Developers. Google is doing this by checking the build date of a system image. If the device is uncertified and that build was created after March 16th, 2018, then Google apps won’t work on that device.

Apparently, Google gave prior warning to device makers regarding this change. For at least a year, users have been coming across this new warning when booting their devices, but clearing data on Play Services seemed to hold it back. However, that workaround is no longer an option. 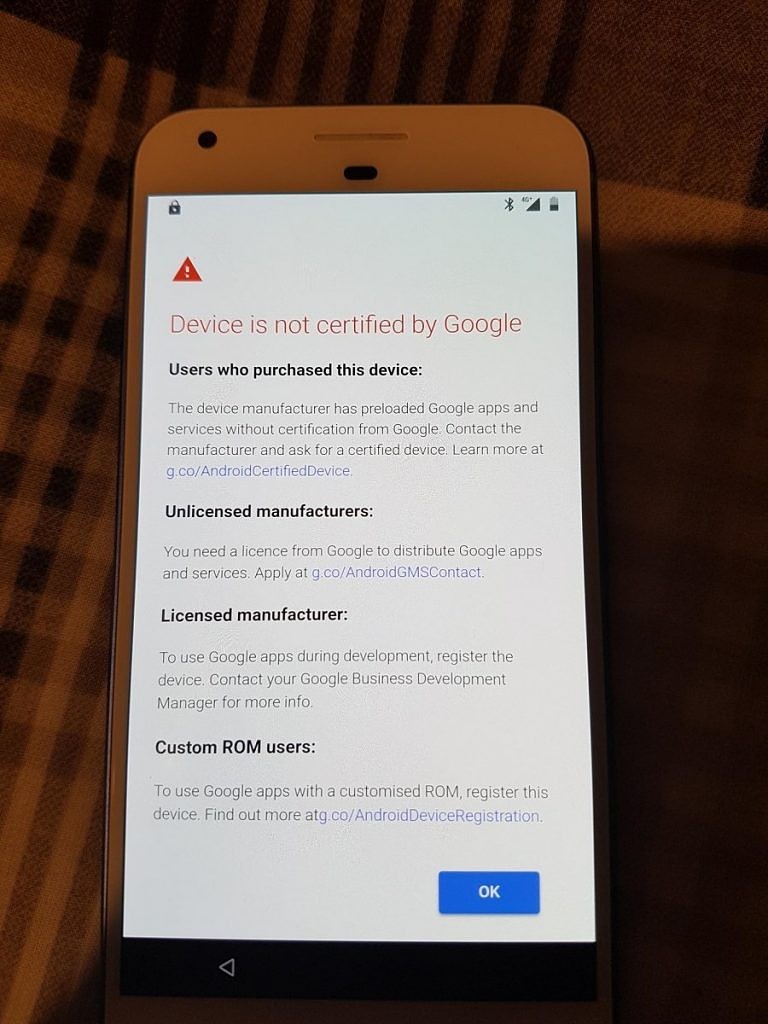 For most Android users, this won’t be a problem as older uncertified devices shouldn’t be affected, but those buying new devices will definitely want to ensure they’re certified.

The biggest collection of Android users who are going to be affected by this change are custom ROM users. Custom ROMs often have nightly builds, meaning for every day since March 16th, those builds haven’t been able to use GApps since they are not certified.

Thankfully, Google is fully aware of these users and is providing a whitelist for them to submit their Android ID to allow GApps on that ROM. There’s a limit of 100 “devices” per user, but it’s still good to see Google acknowledging these users.

As XDA points out, you can get your Android ID using the ADB command “settings get secure android_id.” Once you’ve obtained the ID, simply insert it on Google’s site to get on the whitelist. Do keep in mind, though, that your device ID changes on each factory reset, meaning you’ll only be able to do this 100 times before it stops accepting new IDs.

Update: Google has clarified this matter to Android Police.

Certified Android devices offer users consistent experiences when using apps from Google and the Play Store, as well as various security benefits through Google Play Protect. We acknowledge that some manufacturers are building and selling devices that have not been certified by Google. Please see the website for more details.

Currently, the page accepting your Android ID is also accepting IMEIs, but that is only temporary as Google will be using your Google Services Framework ID to whitelist your device. You can obtain that ID from an app. The process is complicated, but as Android Police points out, that’s what’s Google’s intention is, as the company wants to discourage this type of usage for GApps.