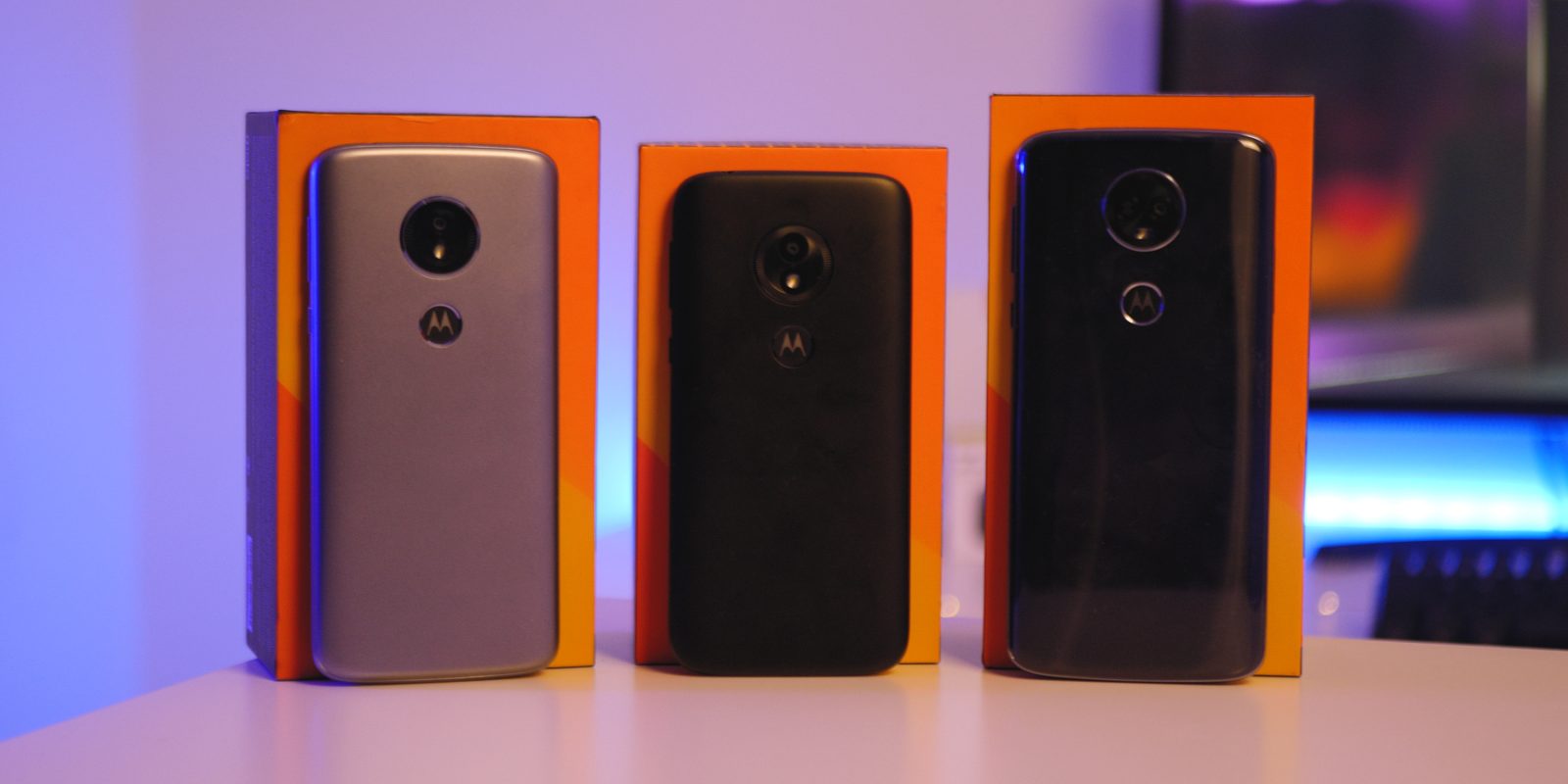 Motorola has gone through a shift in priorities since being taken over by Lenovo, but that hasn’t stopped their popular budget lines from getting steady improvements before, during, and after this transition process. The lynchpin of their entire budget line, the Moto E5 — Standard, Play and Plus — play a pivotal role in the Android ecosystem thanks, in part, to their sheer affordability…

If you just want the basics, then look no further. Every single option within the E5 lineup is a solid option for anyone that is on the tightest of tight budgets or simply wants a good entry-level device that sticks to (almost) stock Android. Yes, the design isn’t exactly inspired and you make quite a few compromises but overall, these provide quality for a cheap price.

The company is still one of the best for keeping the OS streamlined, never straying too far into custom territory. That doesn’t mean updates are forthcoming, as these devices are all on slightly different versions of Android Oreo — despite all being under 6 months old at the time of writing. But tell me a new device under $150 that has the latest Android version within a year and I’ll call you a liar. It’s something that is hopefully being addressed with the Android One program, but for now, it’s something I can overlook.

Moto devices all have a very distinct look, one that has barely changed across their entire lineup since the original Moto G and Moto X was released. Despite the different sizes of the E5 lineup, all exhibit that rounded rectangle look which includes plenty of bezel and even a fingerprint scanner round back. It’s nothing spectacular and neither do we expect it, but the logo printed at the bottom bezel does look a little tacky to be completely honest.

Only one of the three models available — the E5 Play — retains the ability to remove the backplate, allowing you to replace the battery when you feel the need. It’s becoming increasingly uncommon, even at the lower end of the market, so if you’re one for user-replaceable batteries then you are in luck — at least with one option. 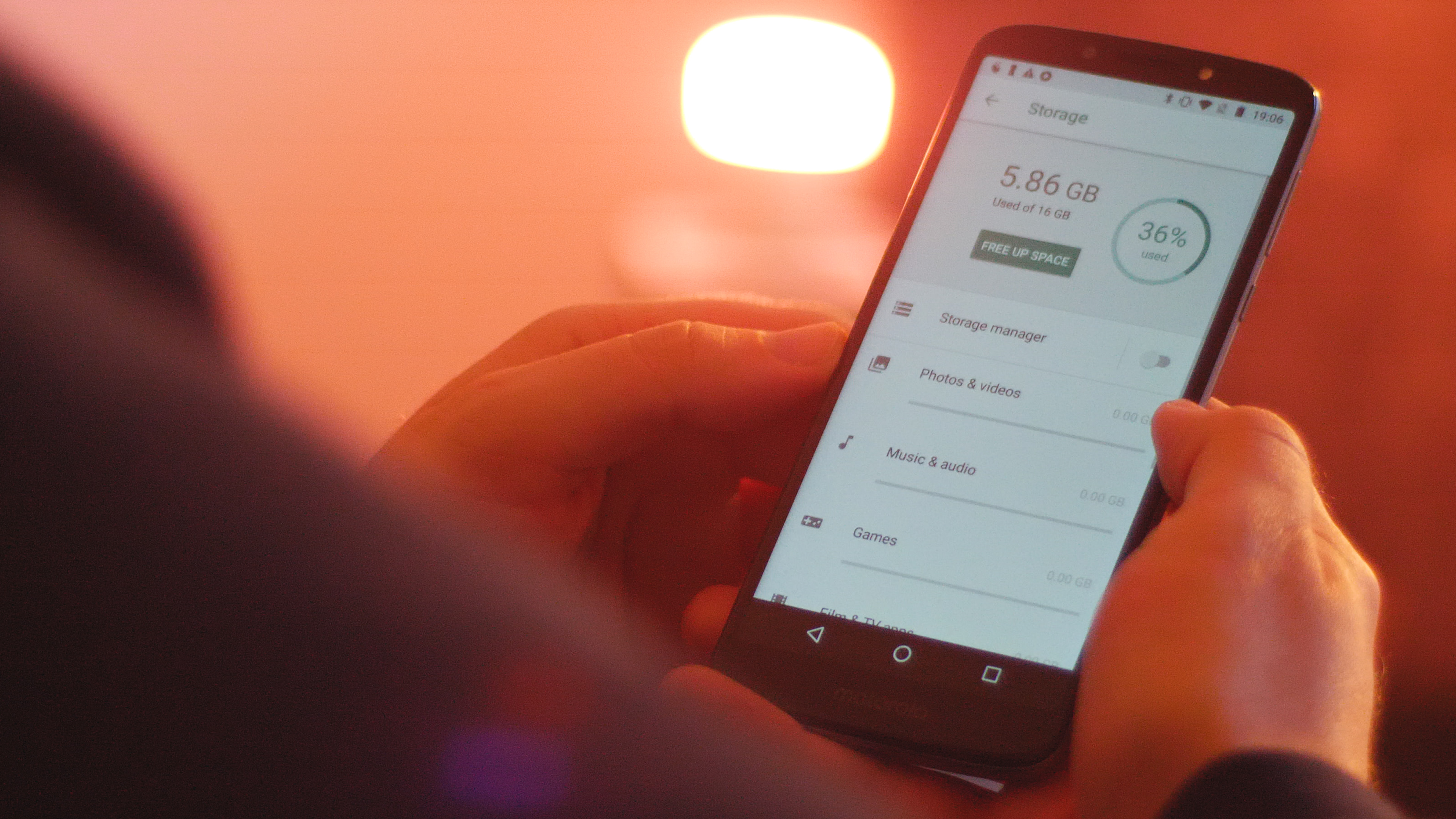 Storage is limited at just for all but one of the three models, which seems pretty paltry when you consider how inexpensive storage is becoming. Although I may criticize the low storage, you can expand it via microSD card should you want a little bit of extra space — 16GB will fill up especially with a large OS file taking up a chunk of it. This is where the generous 32GB — also expandable via microSD card — storage on the E5 Plus becomes a big (pun intended) bonus.

The displays on each device are pretty great too considering the price — with each having its own merits. Nothing over 720p should be expected, and to be honest the quality does vary pretty wildly between each model. The largest of the three — the E5 Plus — would have benefitted from a 1080p display, but I can’t complain too much as it’s overall a pleasant experience here. The same can be said of the standard E5 but the E5 Play, being the cheapest by some margin, has a pretty lackluster panel — you can literally see each individual pixel if you look closely.

Whilst there’s no face unlock option to speak of with any of these devices, each includes a fingerprint scanner for secure unlocks and locking. I was pleasantly surprised after opened the E5 Play as I expected it to simply be a dimple with the Moto logo embossed.

We’ve mentioned it already, but Motorola really does one make of the best variations on Stock Android. There’s little bloat here to speak of, with only the Moto app being the major inclusion. It should be a blueprint for other OEMs to utilize and then build upon with regular updates, for the most part you don’t need a massive skin to make your device stand out.

All of the pre-installed apps are Google stock, which means that the lack of space is less apparent than if it were chock full of terrible third party duplicates. I like that Motorola — and by extension — Lenovo is continuing to stick to this incredibly light software alteration approach. 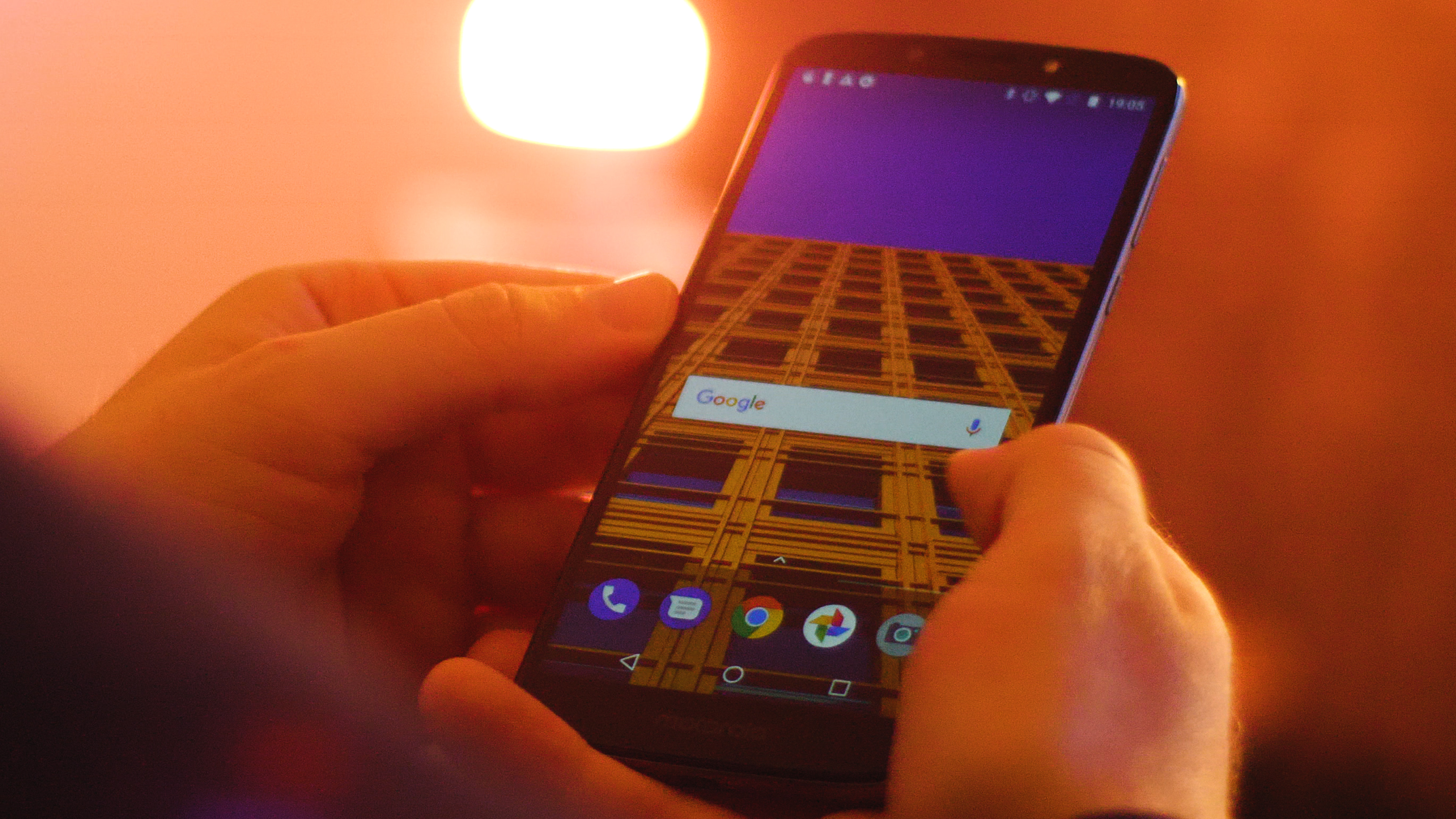 Considering the lightweight hardware, everything runs pretty smoothly — that doesn’t mean there is no slowdown because there is plenty. But the average performance is likely down to Stock Android being less processor and RAM intensive, granted some of that is speculation on my end — definitive proof is hard to come by. Either way, it’s refreshing to use a cheap smartphone that doesn’t always feel like it’s bogged down by simple actions and multiple interactions — this does occur though when the battery gets particularly low.

That doesn’t mean it’s all roses though, as none of the two main E5 models are expected to receive updates to Android Pie — whilst each is currently on a slight variation of Android Oreo. Somewhat surprisingly, the least capable device of the three — the Moto E5 Play — actually runs the most recent build of Android Go Oreo. It doesn’t feel massively different an experience than I expected Android Go to operate, which is a welcome surprise.

2GB of RAM is included in the Moto E5 with the E5 Play including 1GB, which isn’t great for masses of multi-tasking, the E5 Plus includes a slightly larger 3GB. I wouldn’t say any excel in terms of performance, but neither does the Plus model feel particularly fast in comparison. They all just, get the job done with what they have to work with. That means not everything feels slick or refined, it does however mean that each model can manage a number of basics tasks well, just don’t go expecting super performance.

At the cheaper end of the smartphone spectrum is where you’ll find the true battery beasts, everything seems to run into the days category rather than the ‘all day’ category offered by the flagship tier. None of these devices are an exception to that rule, each proudly powering through without problems over a longer period than even my Note 9 can. I love that one full charge is usually enough to get a couple of days of life out of any of the three units, it’s what makes them such a great backup device — in my use case. 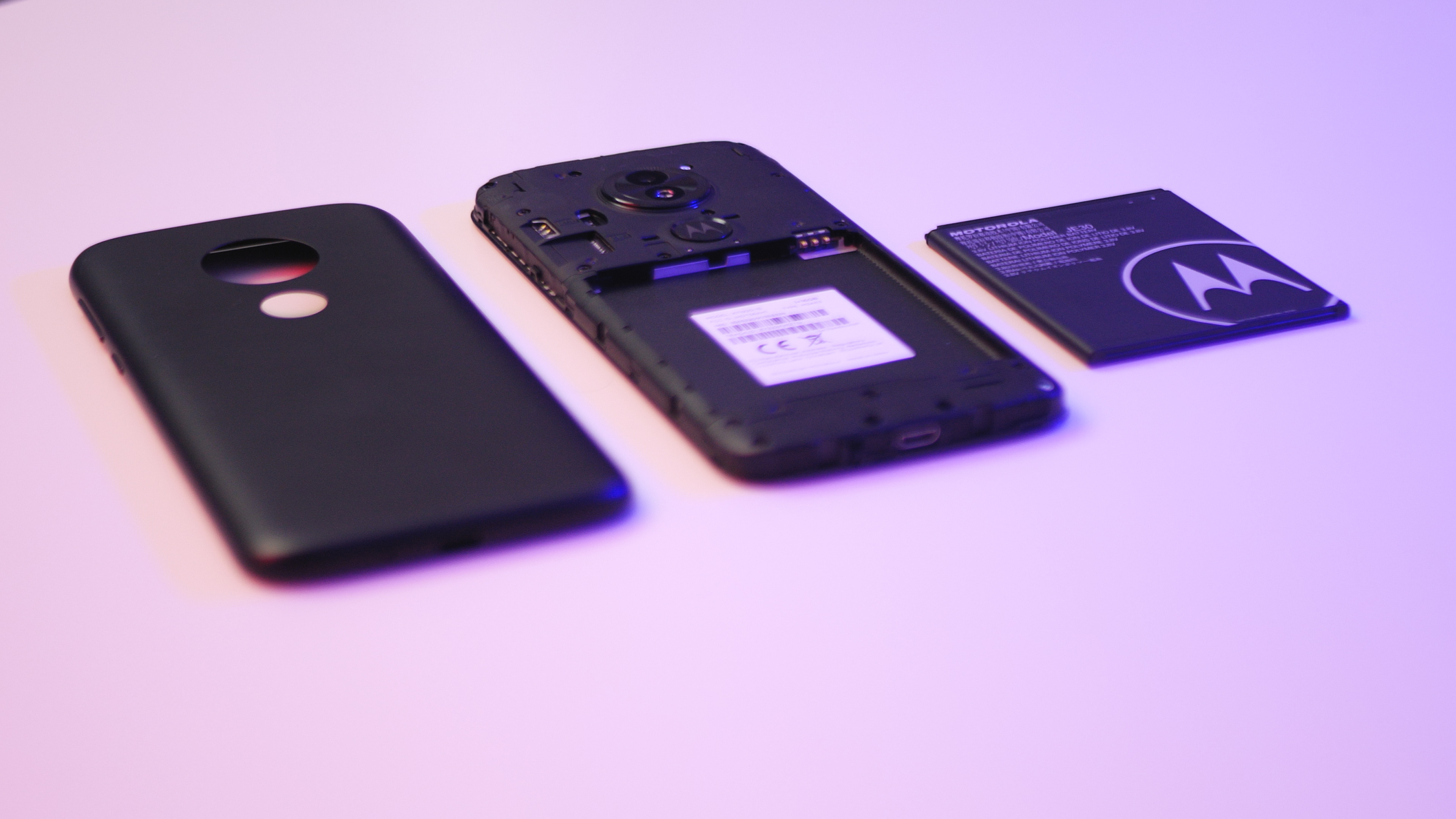 I was critical of the Huawei Y9 for including a micro USB charge port rather than the newer USB-C seen on more and more devices as we reach the zenith of 2018, but I feel that might have been a little scathing for no reason. To cut costs we should probably expect the slightly older standard, after all it does mean cheaper charge cables and accessories.

As for capacities, the E5 includes a 4000mAh battery, the E5 Play a 2800mAh removable option and the Moto E5 Play a mammoth 5000mAh battery. Such is the low power draw that these will easily get you through the day no problem.

One area that I wasn’t expecting a great deal and was not a) disappointed or b) surprised. All three units have weak cameras but are capable of taking a solid — if unspectacular — picture. In any cheaper device, the camera is first to be heavily downgraded to make way for more necessary hardware additions. Don’t expect anything other than sub-par or average-at-best from any of these smartphone cameras and you won’t leave disappointed.

Whilst one of the very cheapest groups of handsets around, there is a great deal to like about the E5, E5 Play and E5 Plus. Motorola has almost pioneered the budget smartphone with their ever-popular Moto G line, but the Moto E models have steadily improved to this point where I think they can get a semi-seal of approval. As an entry point or a solid backup smartphone or maybe even just an MP3 player with the ability to take a SIM card, the Moto E line provides a great option. If you’re coming from a flagship device then I wouldn’t recommend getting one — unless the aforementioned circumstances are applicable — but as the first smartphone for a child or an elderly relative, then the E5 could be the perfect new companion.

If the E5 entices but doesn’t quite hit the mark, then I’d recommend taking a look at the Moto G6. One of the very best sub-$250 smartphones available, it provides everything that makes the Moto E lineup such an enticing budget prospect alongside a few other key ingredients. The inclusion of a 1080p display, 3 or 4GB of RAM and 32GB of onboard storage for slightly more than the entry fee of the E5 Plus means it’s simply the best Moto device at this price range.

The form factor, battery life and inclusion of near Stock Android prove to be more than enough to convince me that Motorola knows their target market and five iterations prove that there might still be some life left in the true budget smartphone market.

Get the Moto G6