Last week, we were finally able to assign a possible product name to the Nocturne Chrome OS convertible that we’ve been tracking for the past several months. While we are already aware of various components, a new benchmark today provides our first look at Google Pixel Slate specs.

According to Intel, this dual-core processor has a base frequency of 1.5GHz and Max Turbo of 4.2GHz, as confirmed by the benchmark. It scored 3767 in single-core and 8022 in multi-core performance, with a bevy of other test results also available.

These specs are consistent with a top of the line configuration, and matches the current maxed out Pixelbook. Given that this configuration last year costs $1,649, it’s more than likely that Google will offer several models, including ones that are more affordably priced for entry-level consumers. 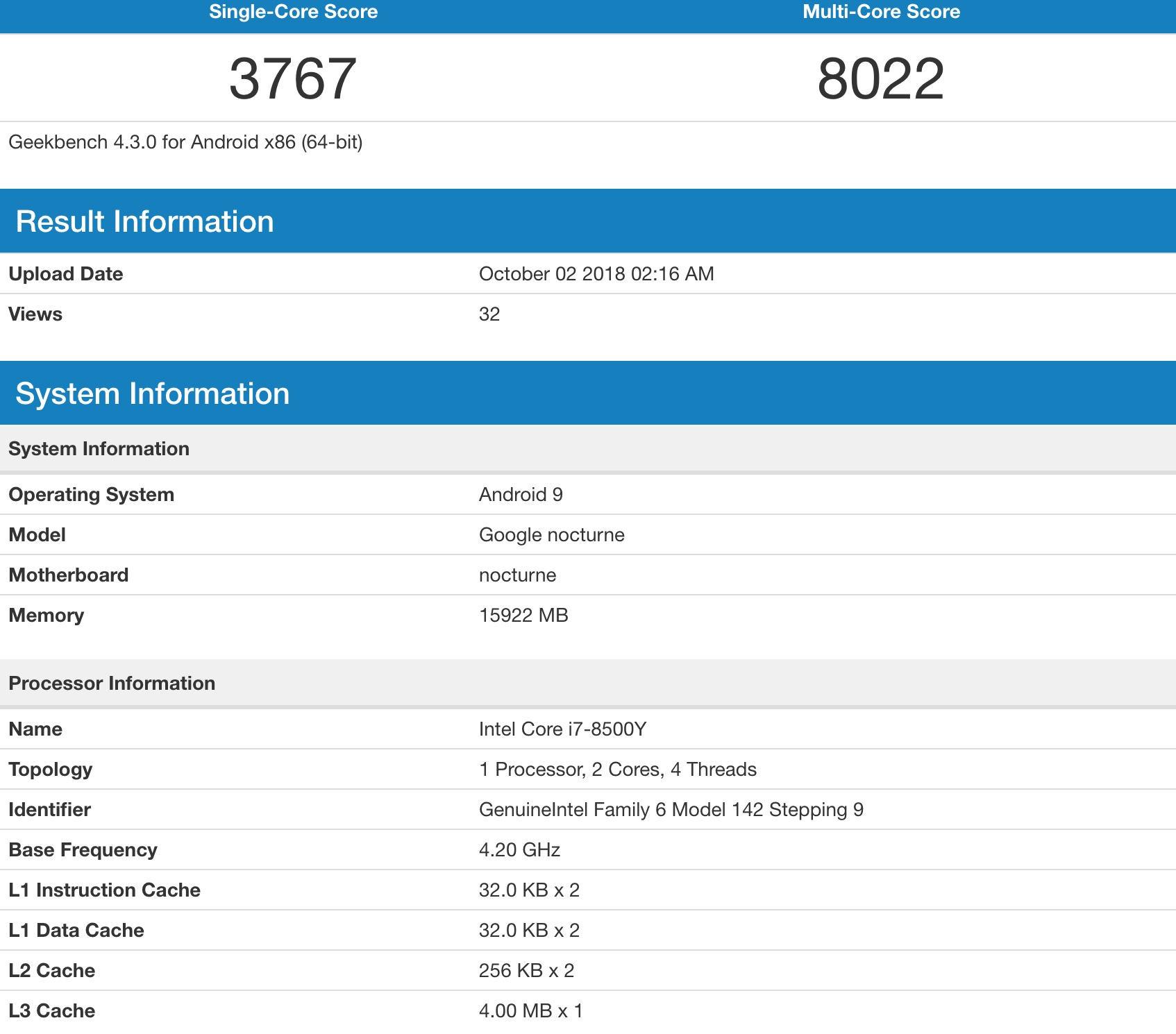 Update 10/3: More benchmarks have appeared on Geekbench suggesting that Google will release at least four variants of the Pixel Slate. At the low-end is an Intel Celeron 3965Y with a base frequency of 1.5GHz and no Turbo Boost. It does feature 8GB of RAM, but unlike the other processors belongs to the 7th Generation Kaby Lake family.

The next step up is an Intel Core m3-8100Y variant that returns to the latest generation Amber Lake line. Also featuring 8GB of RAM, it has a base frequency of 1.1 GHz and Max Turbo of 3.4 GHz. The last new model is powered by an Intel Core i5-8200Y with the same 8GB, but 1.3 GHz base and 3.9 GHz Turbo.

Like we previously speculated, it appears that Google will offer the Chrome OS convertible at a number of tiers and different price points. The Celeron sees a notable drop in single-core performance, while the other three models are about the same across the line.

The test was performed using Geekbench for Android, with the operating system interestingly identified as Android 9. At the moment, Chrome OS still uses 7.1 Nougat to run the Play Store and Android apps. However, Google did detail plans at I/O 2018 to introduce Android Pie this fall. It appears that the Pixel Slate might be one of the first Chrome OS devices to launch with Pie.

Meanwhile, the Pixel Slate is also the first Chromebook to feature a fingerprint sensor and only the second Chrome OS tablet device. Thanks to a leak by keyboard maker Brydge we also have a general idea of the tablet’s design.