While the Pixel 3 and Pixel 3 XL have thoroughly leaked, Made by Google has repeatedly teased that there is more to “know.” Since the hardware has been fully detailed in “first looks” and even “reviews,” that leaves software features that are often under development until the very last second before the announcement.

Now, with less than 24 hours before the October 9th event, we can exclusively detail several upcoming AI-powered features for the Google Pixel 3 camera, including “Top Shot,” “Photobooth,” “Super res zoom,” and more.

Exclusive to the Pixel 3, “Top Shot” is one of Made by Google’s marquee camera features for 2018. After pressing the shutter button, the camera will capture a burst of frames just before and just after. Machine learning is then leveraged to find the best photos.

In concept, it is similar to how Motion Photos record a video before and after a shot. Top Shot is more selective and works to select the best shots through on-device machine learning. Factors taken into consideration by the Google AI include smiles, open eyes, and if subjects are looking at the camera.

While less intensive than video, the Top Shot feature takes steps to conserve device storage. Namely, it decreases the resolution of unimportant parts of the image, with the quality approximately reduced to 3-megapixel. However, the key parts of a photo remain in a higher quality.

When available, the camera app will offer a “Smart Capture” suggestion pill. Meanwhile, users can swipe up on a photo to see the “Smart captures.”

As we previously reported, the dual-cameras on the Pixel 3 are for taking better selfies. To aid in that, a “Photobooth” feature will automatically find the best shots and take the images.

Similar to how Google Clips clips, users can perch their phone somewhere, while the new mode works to automatically capture the best pictures. Photobooth looks for the best shots depending on the current subject.

Google AI is again leveraged to take a picture when people are smiling, sticking their tongue out, making a funny face, or winking, with Photobooth keeping alternatives that users can select from. It also looks for when people are all looking at the camera and smiling.

Meanwhile, another Pixel 3 exclusive feature is called “Super res zoom.” A person familiar with the matter referred to the feature as “pretty much like AI-zoom.”

While we’re not entirely sure on the details for this features, last year Google Brain embarked on building an algorithm that works to create artificial detail when zooming in very close on a photo. Compared to a blocky image otherwise, AI works to create a more viewable image. Announced in early 2017, this could relate to the “Super res zoom” feature exclusive to the Pixel 3.

Multiple leaks have observed how the Google Pixel 3 has one wide-angle front-facing camera. This will be used to capture more in a standard selfie. We believe Google considered marketing this feature as “Super Selfies,” as we previously reported, but that branding clearly did not become final.

As users frame an image, auto focus will work to track subjects in view, rather than having users manually tap to focus. This is a Pixel 3-exclusive feature according to our source.

As you can see above, an earlier build of the Google Camera app previously leaked revealing a redesign that allows users to easily switch modes by swiping just above the shutter button.

Other features making a return this year include Face Retouching, though the Pixel 3 benefits from options for “Soft” and “Normal” in addition to disabling entirely. Other features returning include Motion Photos, slow motion video, panoramas, and AR stickers. 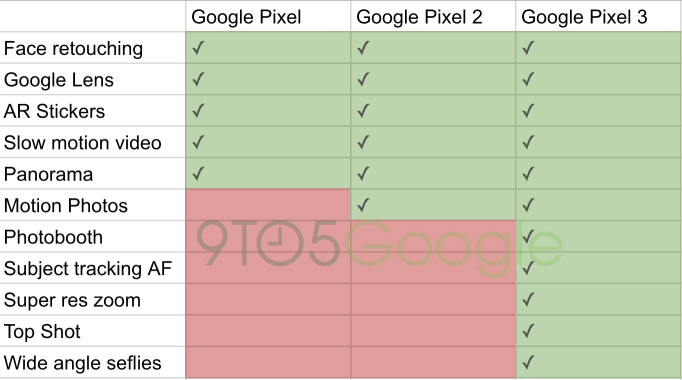