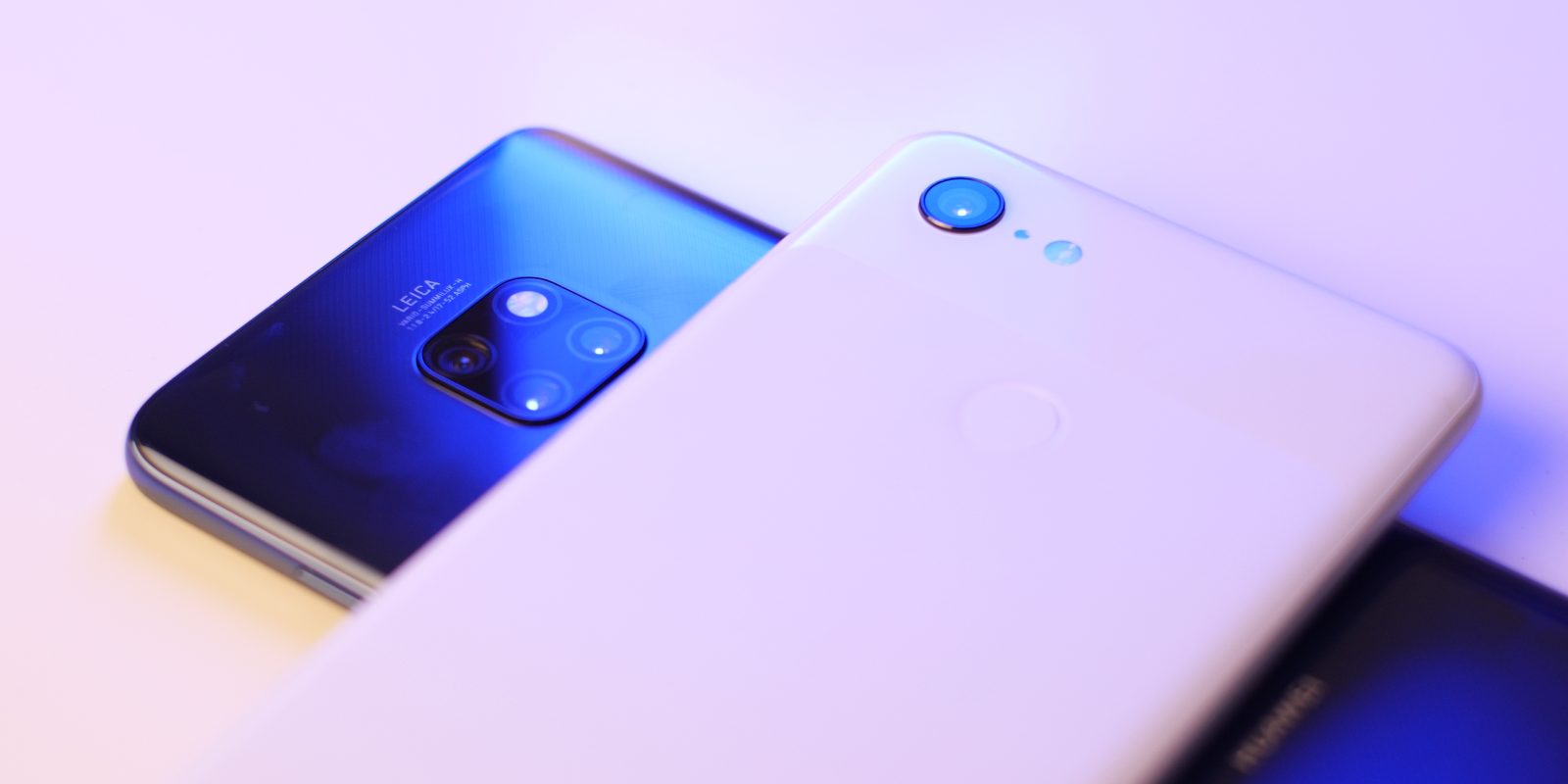 Arguably two of the very best night photography modes on any devices currently available are Google’s Night Sight and Huawei’s Night Mode. The people’s champion has to be Night Sight on the Pixel 3 and Pixel 3 XL, but that doesn’t mean the Huawei Mate 20 Pro’s camera is a slouch. Night Mode on the Mate 20 Pro is very impressive in its own right.

A majorly disappointing aspect of this entire test is just how unlikely it is for the US is ever to see a Huawei-made handset. The US Government clearly isn’t a fan the Chinese manufacturer after imposing yet more sanctions on products from the Eastern tech giant.

Once again, I have gone into the cold damp streets of Leeds here in the UK to try and capture some great pictures in the darkness to really give you an indication of what these cameras are capable of. Just to reiterate, you might get much better results than what I have managed here (I had taken some pretty poor photos too, which haven’t made the grade).

Another note before you make your mind up, these results can be improved upon by simply using a tripod. Getting your smartphone on a camera tripod increases the stability, as each camera mode has software to recognize when mounted, therefore elongating the exposure even more. That results in superior nighttime photos, which is a massive bonus.

Having some experience with both night-shooting modes on each camera is a huge bonus too, as I have an idea of how each would fair before each shot. There are some interesting results here that give you a real-life indication of the differences between both cameras. 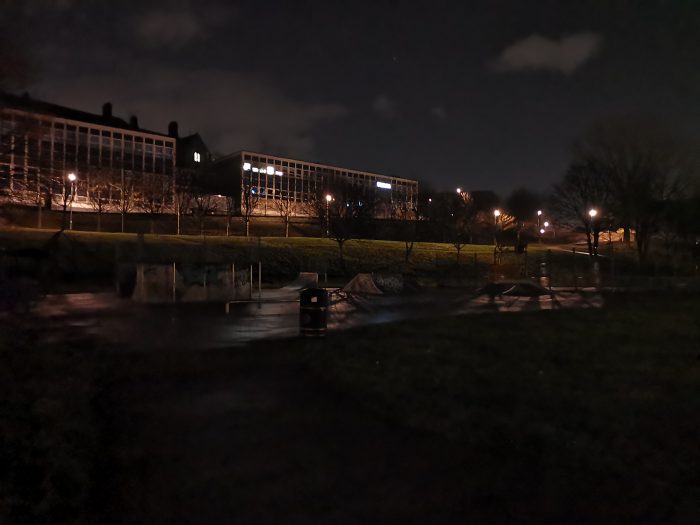 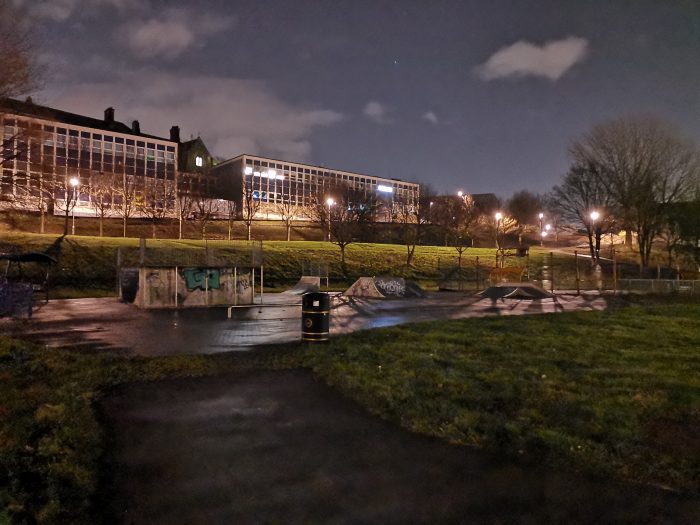 Getting the hard settings out of the way first, the Mate 20 Pro has a slightly longer exposure length when handheld than the Pixel 3. That could be considered an advantage, but it does depend on how well the device can utilize that extra exposure length.

You can see that the Mate 20 Pro does a good job with this long exposure. Revealing the skatepark and the night sky above. I’d say that the overall tone is very cold, but it’s a very good showcase of the capabilities of the Huawei phone in these darkened conditions.

There isn’t tons of detail but from what we had to work with initially, I think that Huawei seems to handle lighting a little better than the Pixel in my experience with both smartphones. 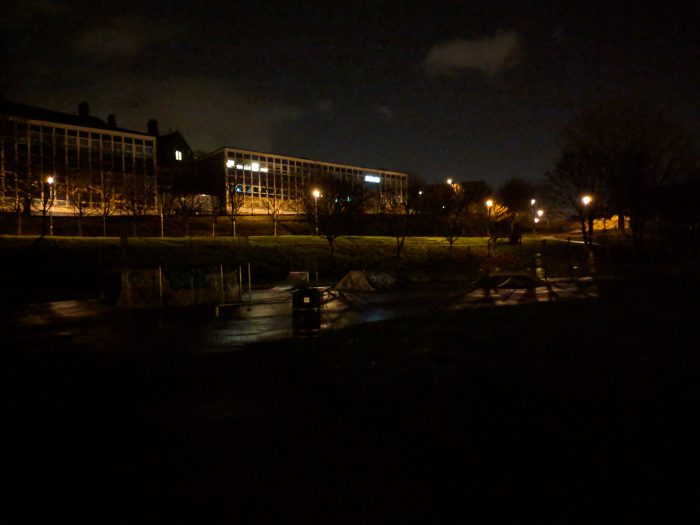 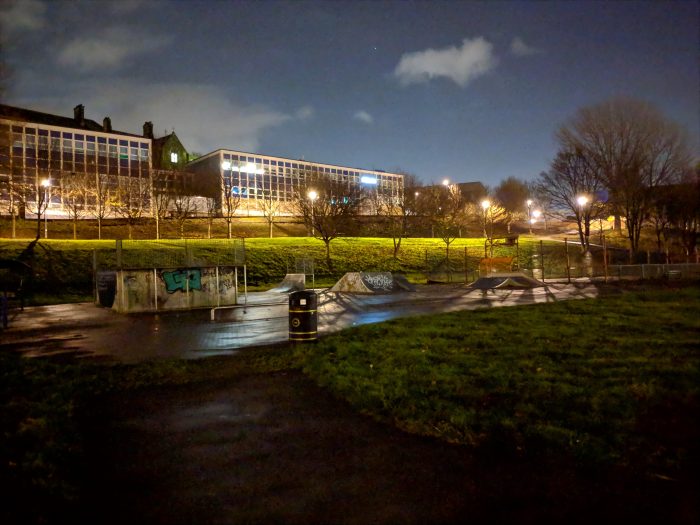 Just looking at a thumbnail of the Night Sight shot, I’d say it feels warmer, more enticing, and ultimately sharper. The dim streetlights at the back of the picture are almost brought to life, adding an extra layer of color that the Mate 20 Pro is severely lacking.

It’s a tough decision to decide between the two and will no doubt come down to personal preference. Overall, the Pixel 3 Night Sight has picked up quite a decent level of more detail than that of Night Mode on the Huawei. 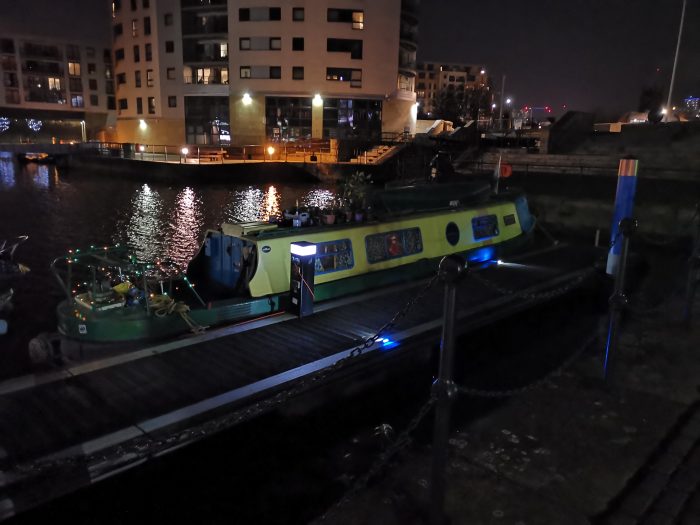 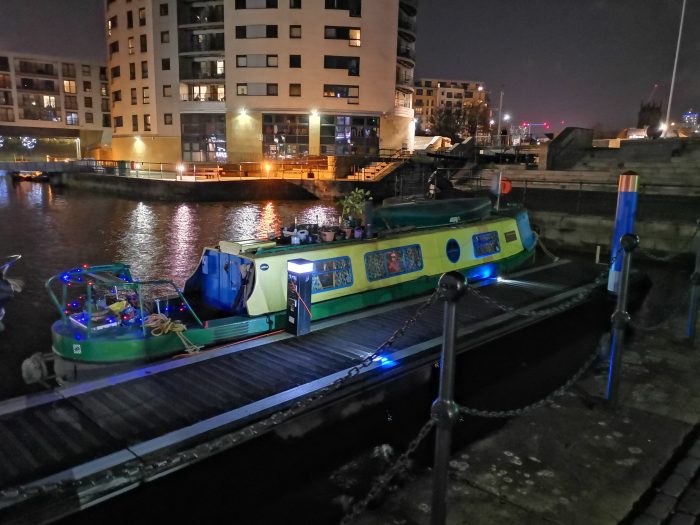 Again, the Huawei Mate 20 Pro does a superb job in gathering all that extra light but it isn’t the massive difference you would expect. I would say everything has that steely, cold look again even though there is a lot of orange street lighting.

I’m impressed at the extra depth that is revealed in the far distance, including the red lights picked up despite being at least a couple of miles away from where I took this image. The yellow of the houseboat does look a little washed out though, as does the green. 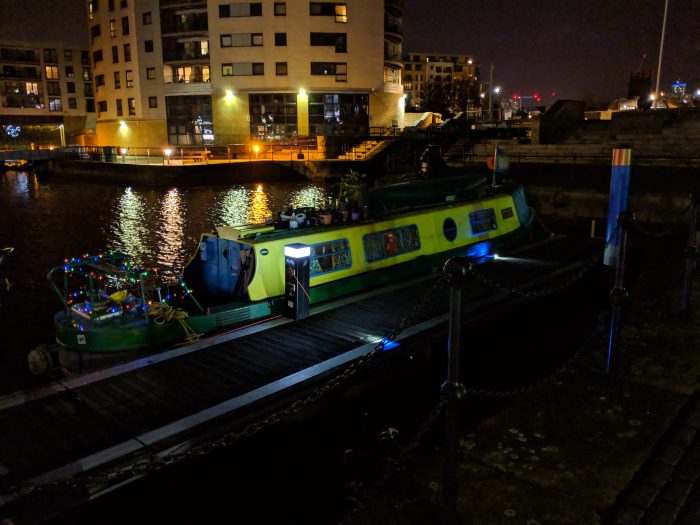 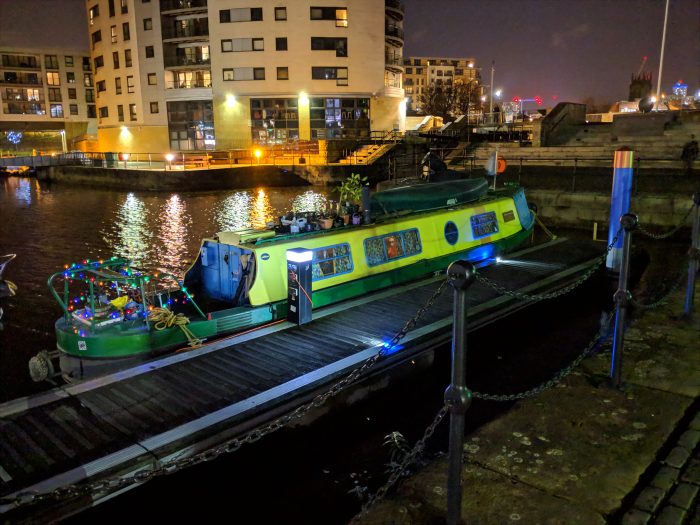 The Pixel is bringing the rich colors back to night photos with this houseboat. Beautifully rich greens and even the reflections on the canal look much more detailed. I would say that this is a sharper image overall, but the lighting creates hot spots that are a little bit disappointing.

I love the skyline being a deep purple-blue color too, while simultaneously in the far distance those red lights atop the crane are unveiled just a tad better than what the Mate 20 Pro is able to achieve. 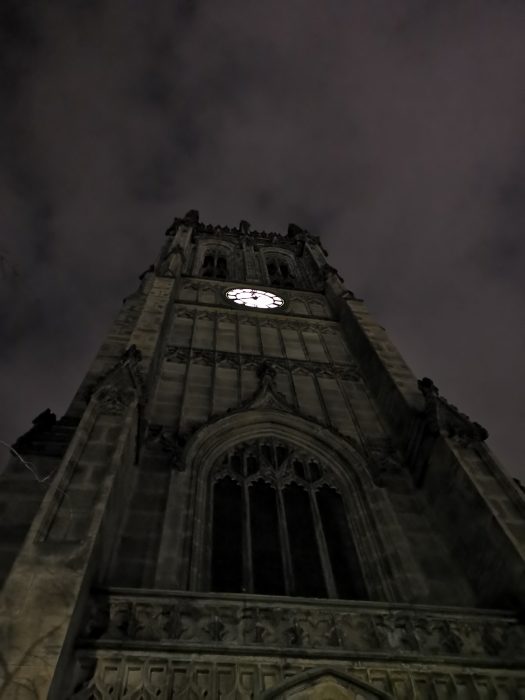 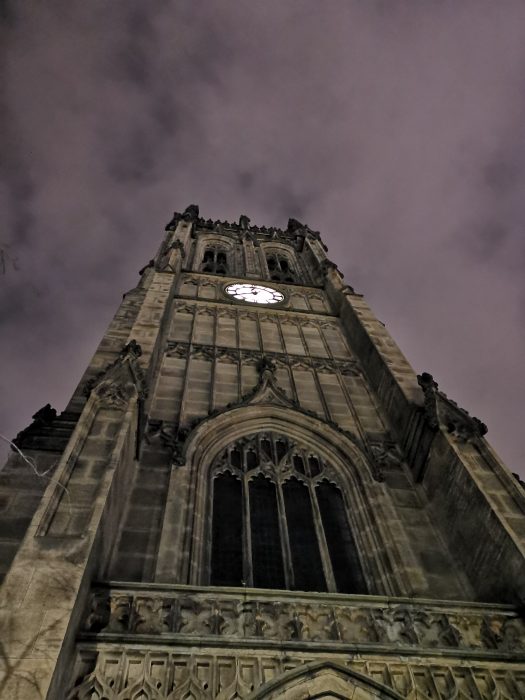 The changes don’t have to be so drastic with both camera modes. As you see, subtle improvements can have a huge effect on the overall quality of a photo taken with Night Mode. The masonry on this old Minister is unveiled and the color tone works really well with this weathered building.

I’m not 100% convinced at the sharpness, as the Mate 20 Pro should be able to produce a sharper picture in this scenario given the extra lighting, but that doesn’t stop it from being a great image. 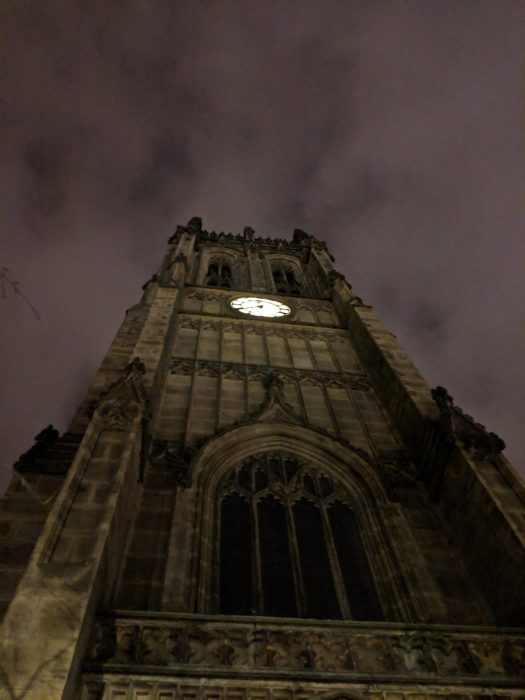 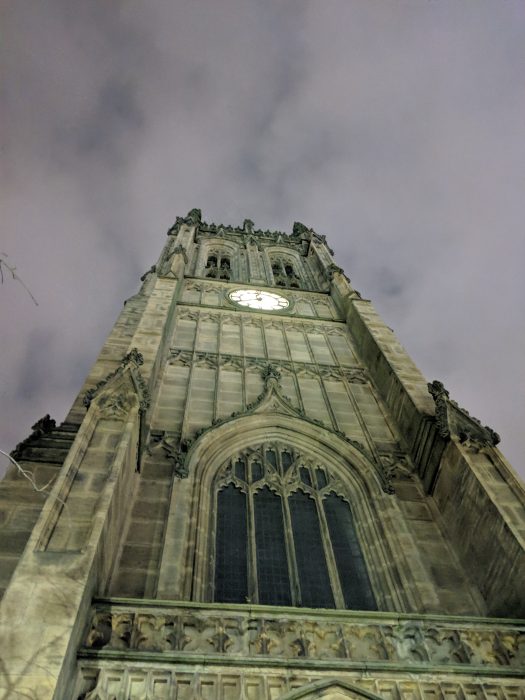 Instantly with the Pixel and Night Sight, we see a greater level of detail, but it feels a little whitewashed overall. The masonry feels much more flat with less shade and definition inside the windows, but you can actually see the inner window sill — which is impressive.

I am not so pleased overall with the Night Sight picture though, as it feels a little ‘too exposed’ given how well it normally manages in low light. 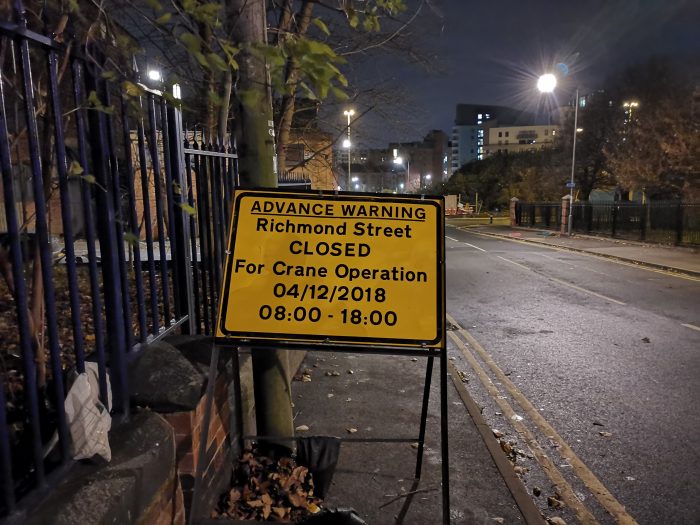 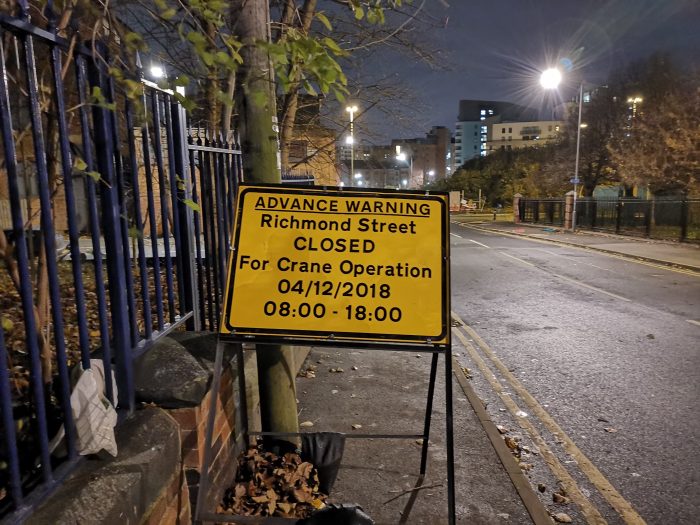 Night Mode on the Mate 20 Pro does make a decent bit of difference, again though, we see some softness. I’m not sure if that is because I was unable to keep 100% still when taking the long exposure shots. That said, like the Pixel, there are extra details unearthed and colors bumped. 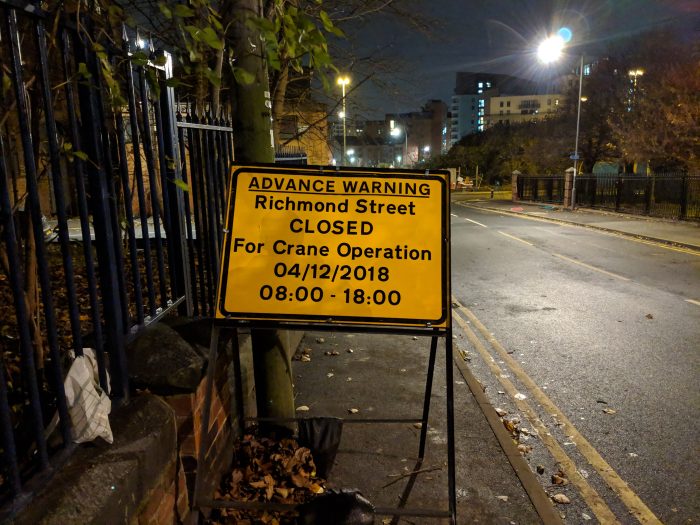 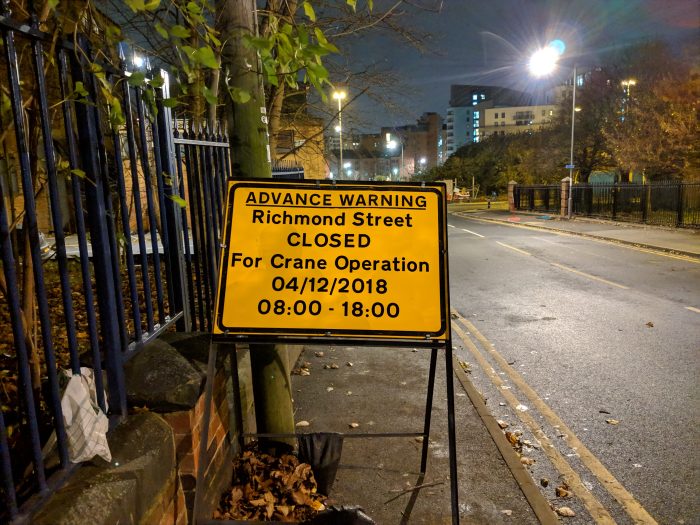 You could be forgiven for wondering if Night Sight has even done anything here. It’s true, at first glance it is difficult to tell, but it’s a good sign (pun intended) of how good the single camera setup is on the Pixel 3. Spend a little more time inspecting and you can see the colors are bumped up and more saturated.

The streetlight in the background does produce a bit of extra lens flare, but the road and trees at that side of the image have a little extra life injected into them, too. Within every little pocket you can see improvements all while the image retains plenty of sharpness. 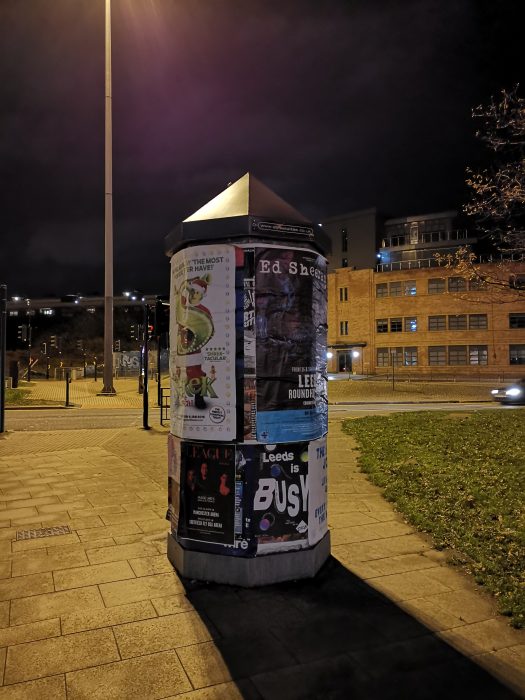 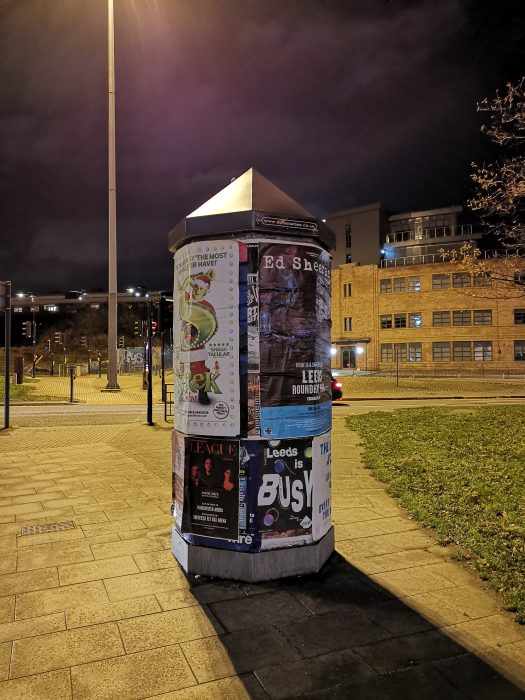 With all the light on the opposite side of this huge bollard, the extra details within the shadows help fill out a picture such as this. Much of the text on the posters is unreadable — something I hoped would improve. The changes are so subtle that it’s disappointing really.

The grass looks muted and lacking in any real definition but that said I like the overall colors of this image compared to some of the others we’ve seen thus far. 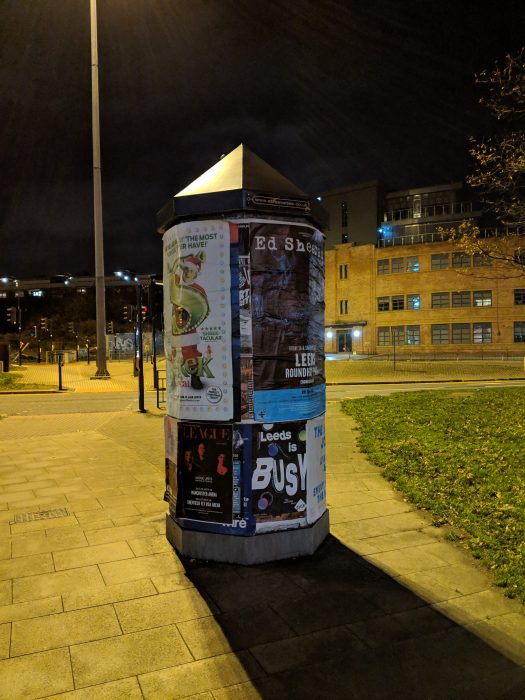 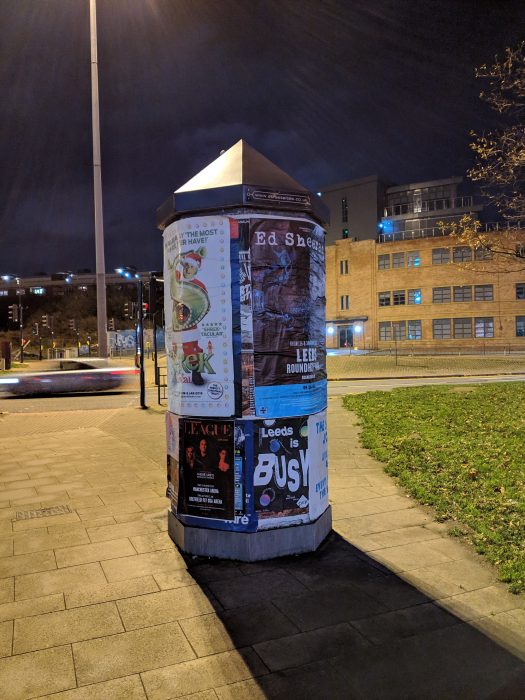 This feels steely and again, hasn’t retained much detail in the text on the posters, but it’s a tad better than the Mate 20 Pro in terms of clarity. The big color change is what has stood out to me the most. The yellow-orange street light is neutered and you could be forgiven for thinking this photo came straight from the standard Huawei camera mode.

Between these two, I cannot choose which is a better night shooting mode. Night Sight is excellent, Night Mode on the Huawei Mate 20 Pro is also superb. I would say that the Mate 20 Pro (and by extension the standard Mate 20) produce images that remind me very much of Gotham via its steel color palette.

What’s more impressive about the Pixel, however, is that it’s capable of doing this well simply with one rear camera. Huawei is able to gather detail from the three rear-facing shooters should they wish, plus have the added benefit of a wide-angle and 40-megapixel sensor to help gather yet more light.

One thing I will reiterate is that while this test was conducted handheld, you can achieve even better results still simply by using a tripod. If you’re serious about nighttime photography, then this is an essential purchase.

If you’re a Pixel user or Huawei fan, we’d love to know your thoughts or even see some of your best shots with both modes (on both devices). Get your opinions and best photos right down there in the comments section. And for those in the US, would you like to see Huawei heading to your shores soon?