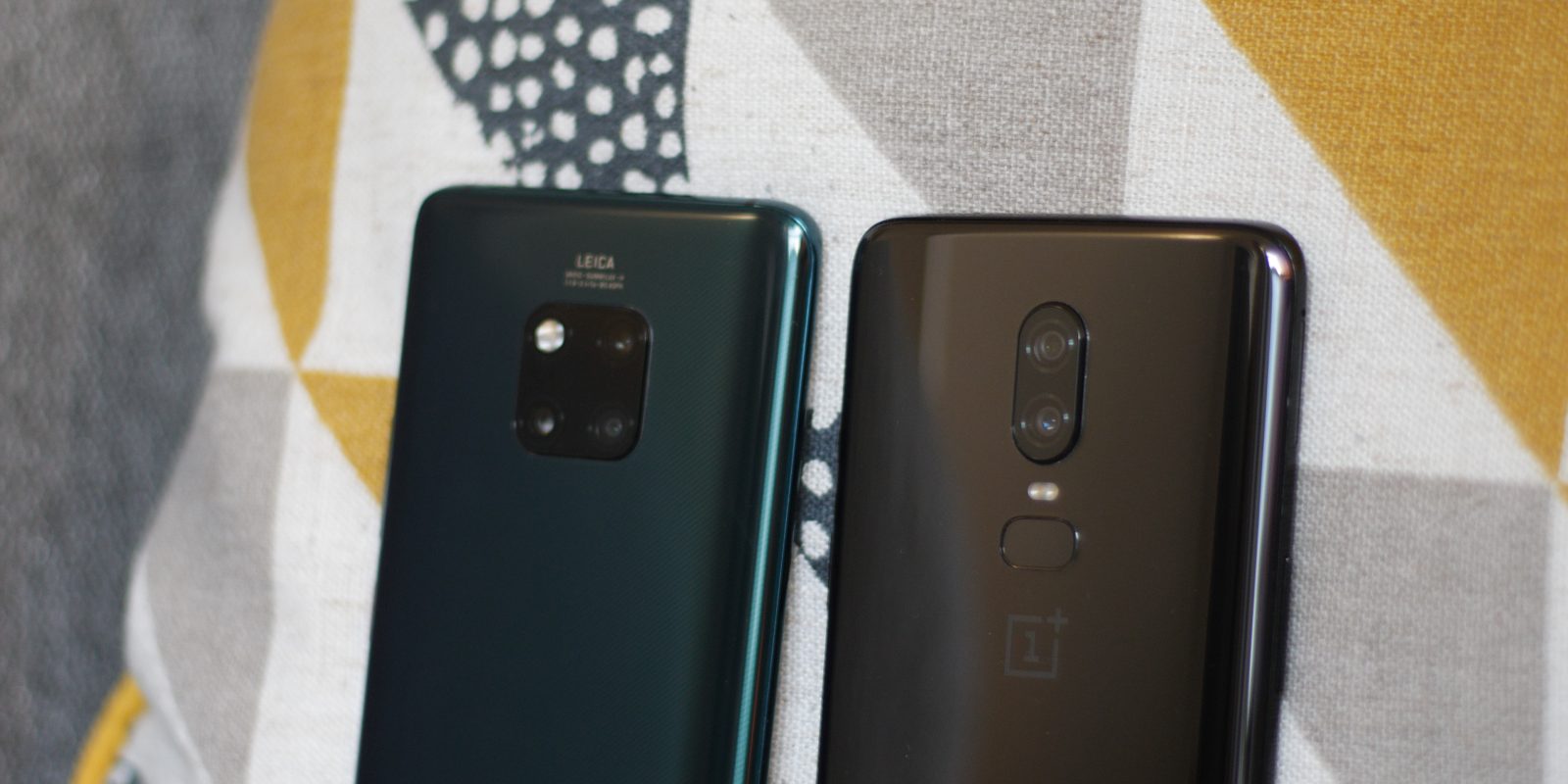 We recently gave you a taste of what to expect from the newest night mode on the market in the form of OnePlus’ Nightscape, but how does it stack up against one of the other best night shooters that aren’t from Google?

This camera test will give you an indication of what to expect from the Huawei Mate 20 Pro Night Mode and the OnePlus 6 / OnePlus 6T Nightscape mode when used in the exact same lighting situations. Hopefully this might be the guide that helps you decide which device to pick up — granted the Mate 20 Pro is not officially available in the United States, however.

While the hardware is very different on the two devices, both use very similar techniques to achieve a long exposure night photo when using the camera modes.

It’s probably a little unfair to pit the OnePlus’ camera optics up against arguably one of the best camera systems on the market right now. That said, these are two devices bound to be near the top of many buyers’ shopping lists.

Each camera exhibits some unique characteristics, like the OnePlus 6 and OnePlus 6T exhibiting a much warmer tone for example. Whether you like that or not is up to personal preference. Of course, if having certain camera traits affects your buying decision, then this might give you a solid indication of what you can expect.

Recognizing that the entry price of the OnePlus 6T is almost half that of the Huawei Mate 20 Pro is also another important aspect to consider before passing a final judgement. That said, after being so impressed with the Mate 20 Pro prior to conducting this little experiment, my opinion was that the Huawei would wipe the floor with the OnePlus. You’ll quickly see that it wasn’t exactly the case. 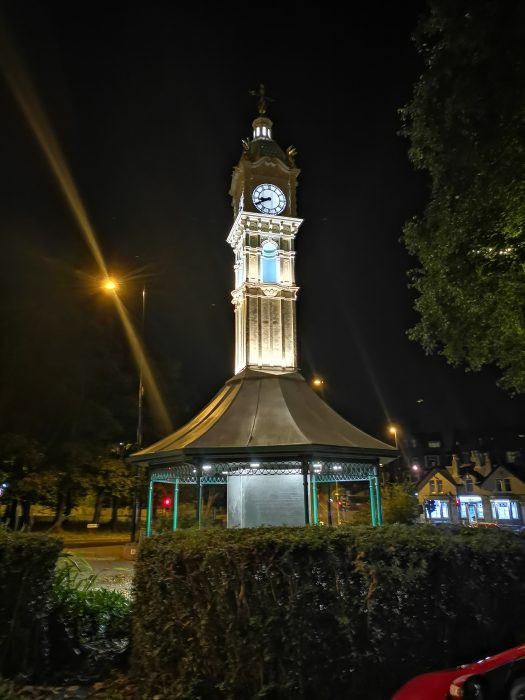 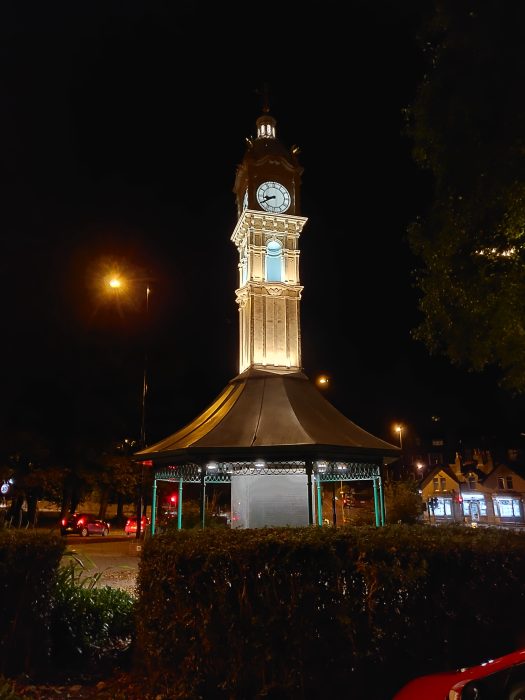 Just looking at the two images, there a few key traits that we might see more of in the rest of this comparison. The OnePlus (pictured right) is not exactly the most detailed, but it does have an inviting warm yellow/orange tint when compared to the image from the Mate 20 Pro on the left.

Undoubtedly, the Mate 20 Pro packs in a lot of extra detail, but there is some pretty drastic lens flare from the streetlights. The differences can be much more subtle than this though. 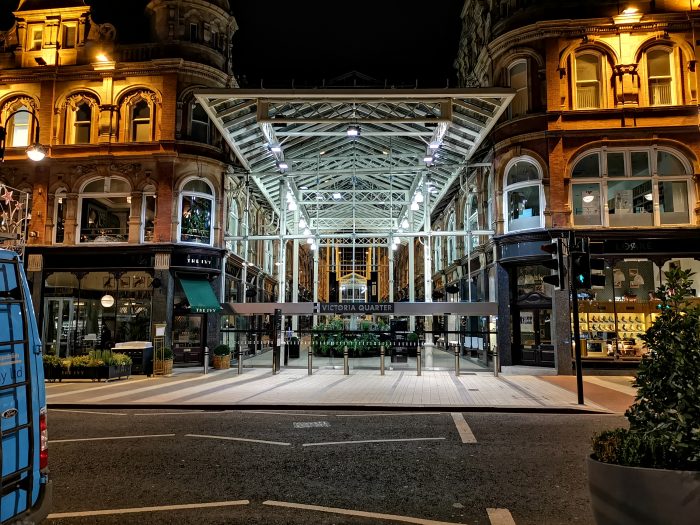 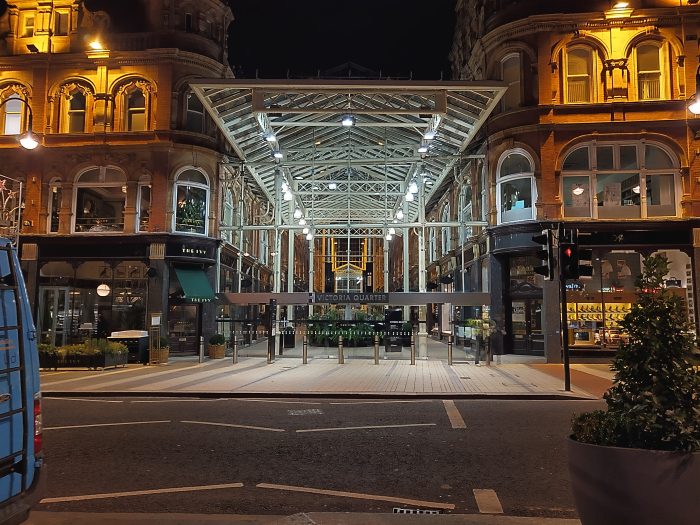 A prime example of the subtle differences between the two night shooting modes is how they both deal with multiple light sources. The Huawei Mate 20 Pro manages to retain an overall crispness that the OnePlus’ camera just can’t match.

While the end results aren’t a million miles apart, I would wager that most of you reading this will prefer the Mate 20 Pro image. When simply viewed alone, the OnePlus’ Nightscape image does look more than adequate. That said, I did mention in my first hands-on that it seems much more sensible to pick and choose when you use the settings for the best end result. 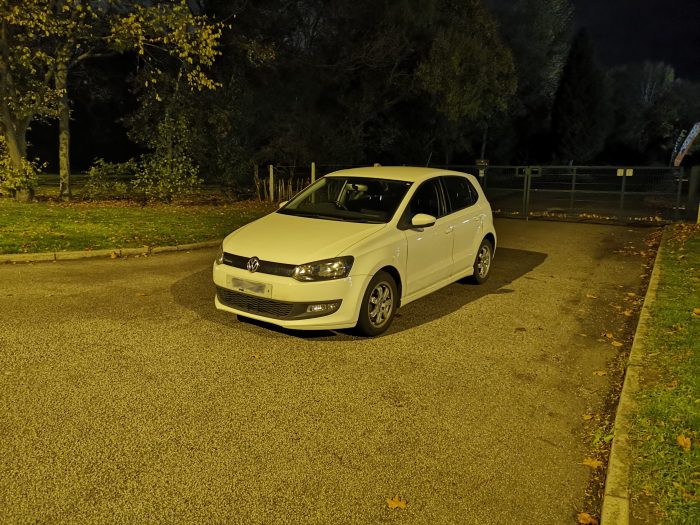 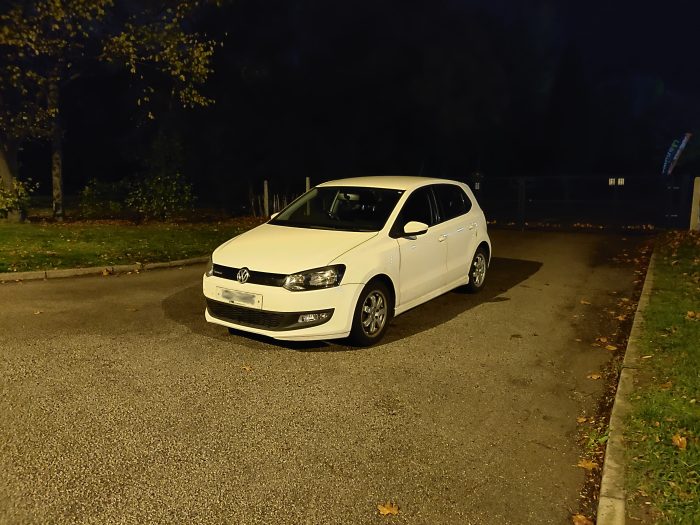 Multiple light sources might pose the OnePlus’ Nightscape a little problem. When I opted to try shooting with one admittedly poor streetlight in another test, it felt like a complete role reversal. The Mate 20 Pro added more detail, but also added a yellow/orange tint to what should be a white car. You can see just how dark it is in the background within the Nightscape version.

Kudos to the Mate 20 Pro for unveiling this extra level of background detail, but I must say that I prefer the Nightscape version. The car is clearly the right color and it might be much less detailed, but it just looks better to my eyes. From a quality perspective, Huawei’s Night Mode does exceptionally well, but from a photo perspective, it’s Nightscape for me. 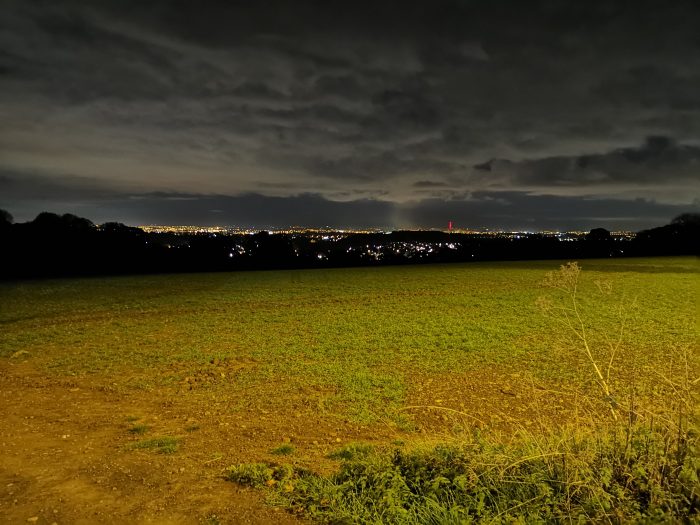 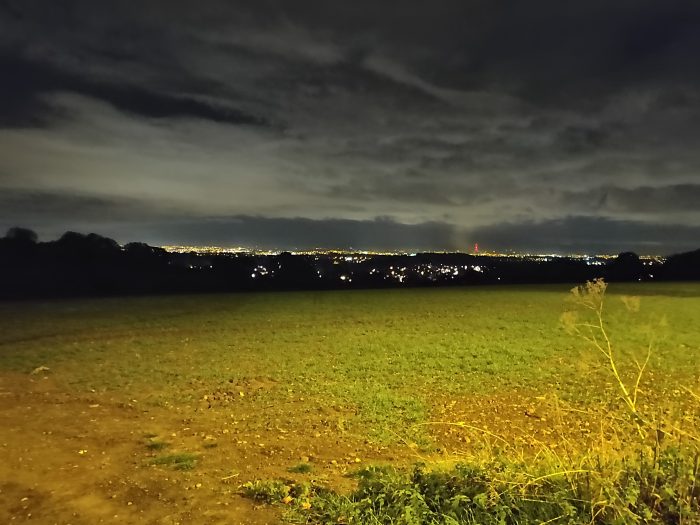 Testing both camera modes with skylines wasn’t as impressive as I hoped it would be. Although, I really do love the way both night modes have captured the moody, cloud ridden sky. You might instantly see a quality drop-off with Nightscape on the OnePlus, whereas Night Mode on the Mate 20 Pro is nice and crisp — at least until you see the backdrop lighting.

Both cameras don’t manage to do the view much justice, partly due to picking up the glow from a nearby streetlight. It does mean you get a nice clear view of the field in front, but a not-so-great render of the city in the distance. Objectively, the Mate 20 Pro does edge out the OnePlus in the overall quality stakes though. 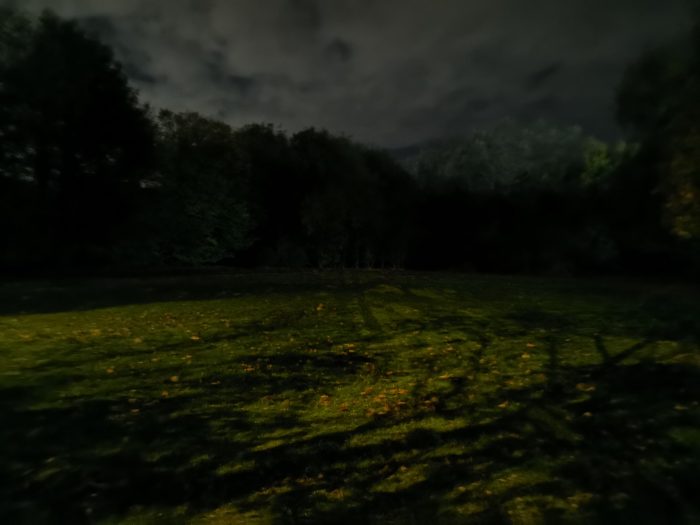 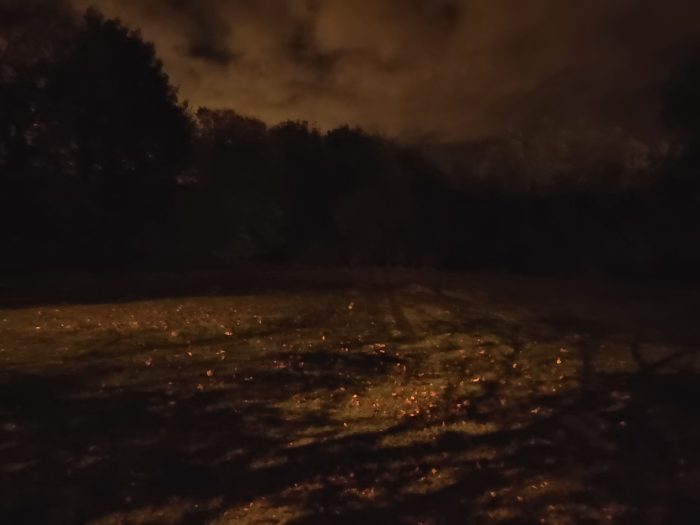 One final comparison which you could say is a little unfair on both smartphone cameras… Despite it being pitch black, I’m shocked that either camera could even reproduce these images. It’s a no-brainer that the Mate 20 Pro’s Night Mode has done an amazing job considering the severe lack of light in the pitch black field.

It’s shocking how both have managed to basically pull or find light that I couldn’t even discern while I was standing to take the picture. Of course, you can clearly see the color difference between the two cameras. The Mate 20 Pro objectively produces the better quality photo. That said, I was so impressed that both cameras were even able to pick anything out on a dark Autumn evening.

I appreciate that this test definitely favors the Mate 20 Pro. Putting the price into perspective, a device that costs double the value of the OnePlus 6T should provide a better camera experience full stop. That said, the OnePlus 6 and OnePlus 6T’s new Nightscape camera mode is much better than I ever anticipated it would be.

As I said in my super quick hands-on, picking and choosing when to use Nightscape is key to getting the most out of it. As for the Huawei Mate 20 Pro’s Night Mode, well that has shown just how good it can be. It will be very interesting to pit it directly against the Pixel 3’s Night Sight mode in the coming weeks.

We’d love to know your thoughts. Give us your input in the comments section below.