Feature Made by Google 2018 Video 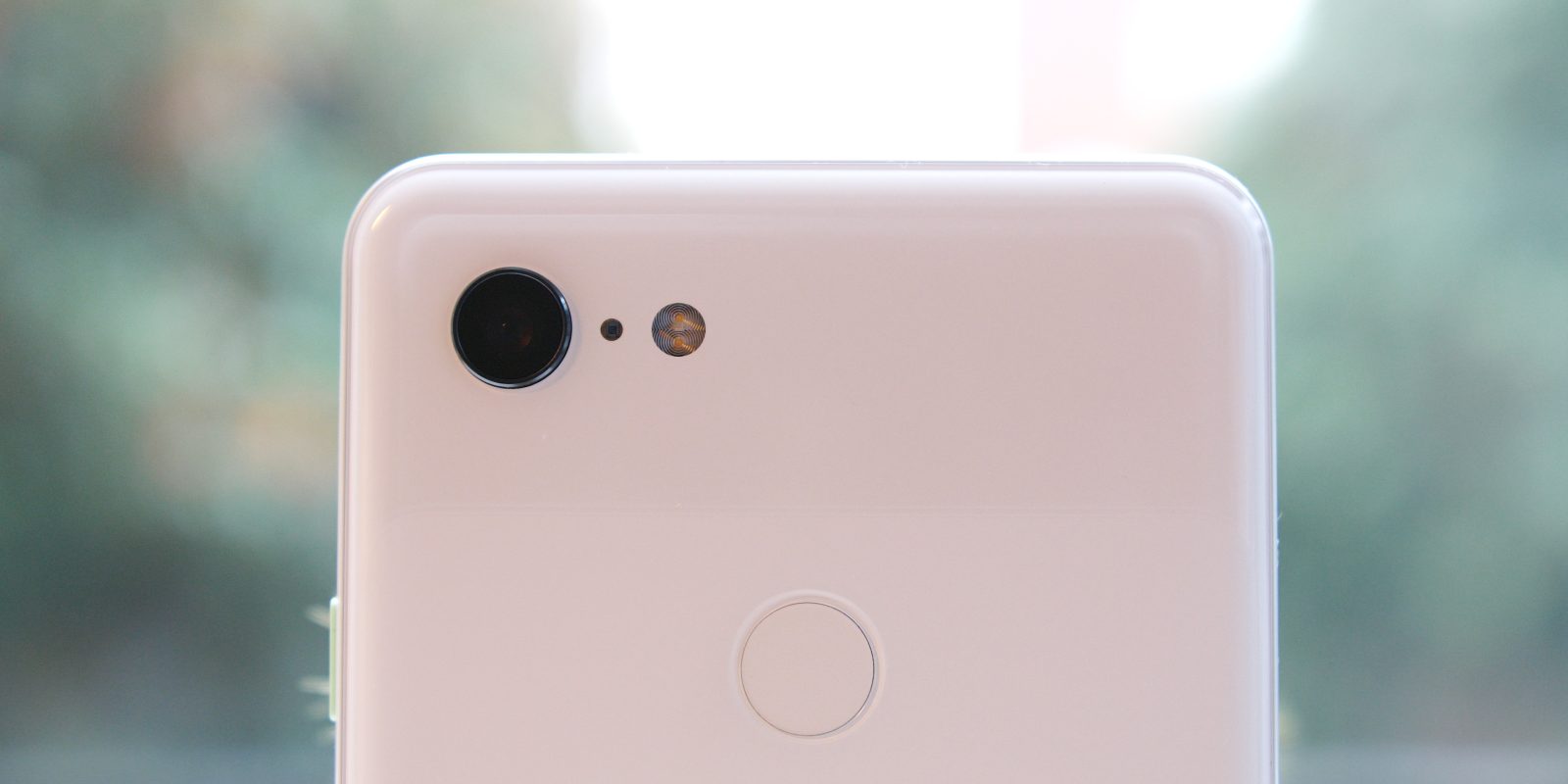 Thanks to some enterprising developers over at XDA, a modded Google Camera .apk file can be sideloaded onto OnePlus 6 and OnePlus 6T devices to give you a rudimentary experience of the Pixel 3 XL Night Sight on Oxygen OS. So with that in mind, we headed out into the freezing cold streets to see just how two of the newest specialist night-time camera modes fare against one another.

First, let me preface the results by letting you know about the weather conditions (this is important as to the actual results you will see). It was a little misty and very damp, which does mean a few pictures were affected. It’s not a camera quality issue, rather a weather condition issue that sees some pictures looking a little fuzzy due to just how misty it was during the testing phase.

In an ideal world, a Pixel 3 XL Night Sight camera test would occur on a nice crisp, dry evening. But alas, we are not blessed with weather so forgiving for evening camera testing purposes here in the United Kingdom.

And finally, this is a camera comparison with the main aim being to show that whilst the hardware on the Pixel 3 XL is good, it’s the software that really makes Night Sight such a powerful computational photography tool.

Of course, I could have taken multiple photos and claim they are much better than in standard auto mode. Because of this, there is a test image to show you just how much each night shooting mode has altered the original image in each of the examples below.

This is not an easy test, you may have seen plenty of posts on social media showcasing both camera modes — especially the Pixel 3 XL Night Sight — but this is literally a ‘maximum capabilities’ camera comparison. As I mentioned, the weather is something you can’t control and it can play havoc with your photos. 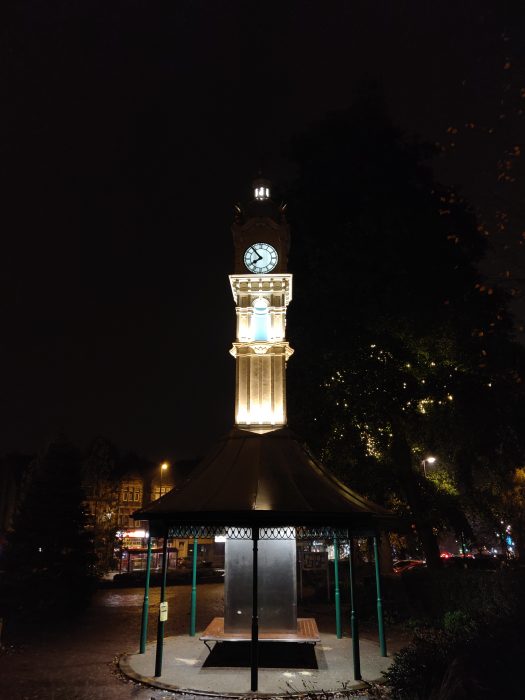 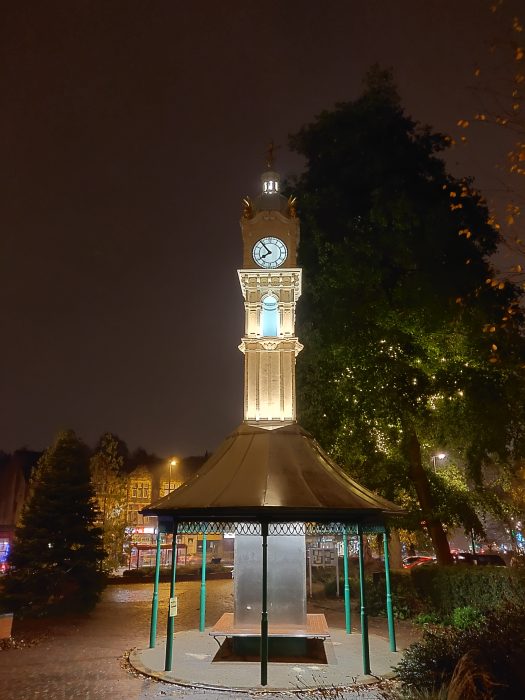 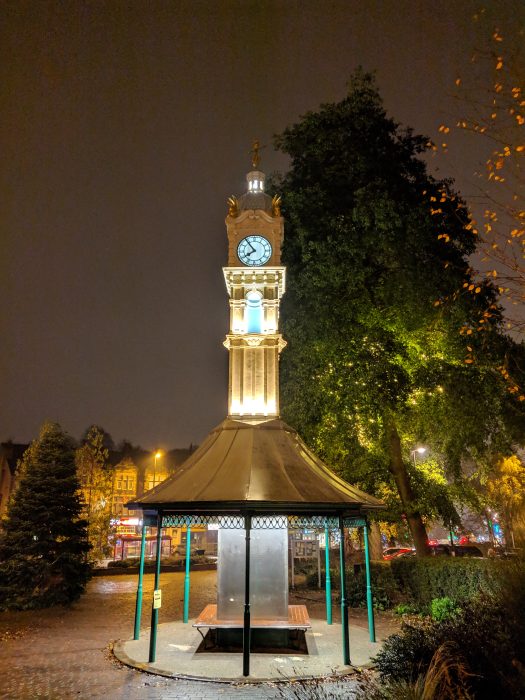 So to kick things off, the OnePlus 6T has the slight advantage over the Pixel 3 XL thanks to the ability to utilise these two new night shooting camera modes. Naturally, the Night Sight mode on the 6T is not official in any way, shape or form, but still offers a slight step up from the standard Nightscape mode — as you’ll quickly notice.

Looking at the three images side-by-side you can see the improvements with each photo mode. I mentioned in my initial hands-on with Nightscape that it sometimes seems to make pictures look a little softer, but overall does a decent job given the right conditions. The same can be said here.

Night Sight though takes things a step further and really does a great job with the camera hardware on offer here. The difference from Auto to Night Sight is simply amazing. That said, there is a little extra noise which is even present in the Pixel image but to a lesser extent. 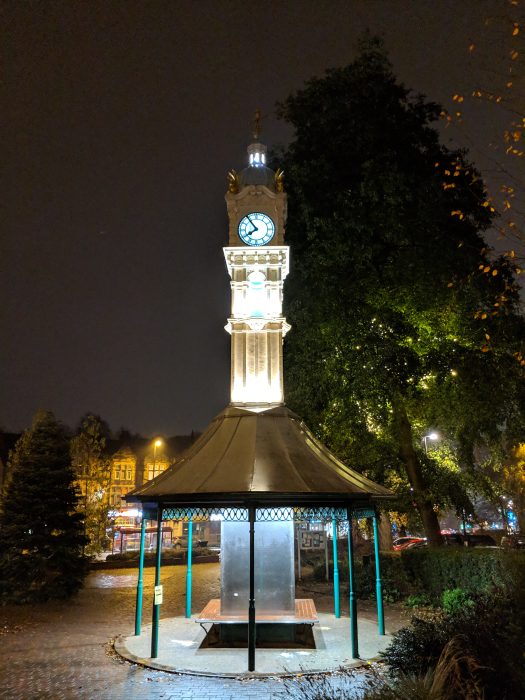 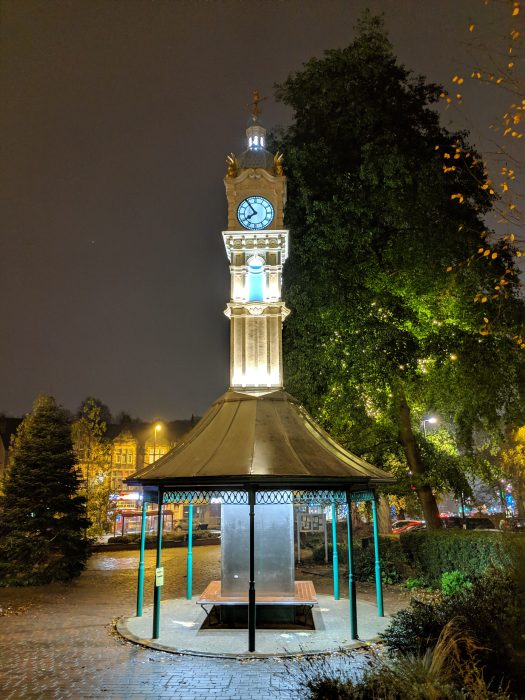 That single lens setup does some magical things with the Google camera application. Just look at the extra detail even in the shot taken in Auto mode. But Night Sight just seems to add that extra layer of detail and softens the overexposed portions.

In my usage, Night Sight seems to help dampen these portions really well and bring out an extra layer of detail that catches the eye. The result is very impressive in this type of scenario and is pretty much the ideal use-case for Night Sight on Pixel devices. Taking a seemingly acceptable image and then doing so much more with it. 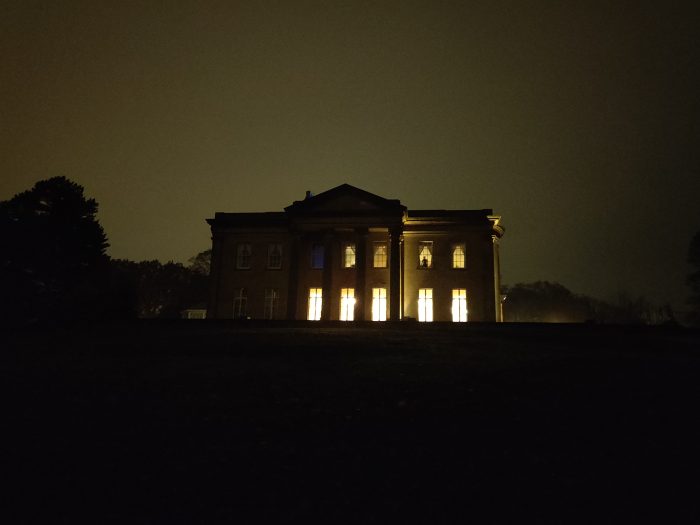 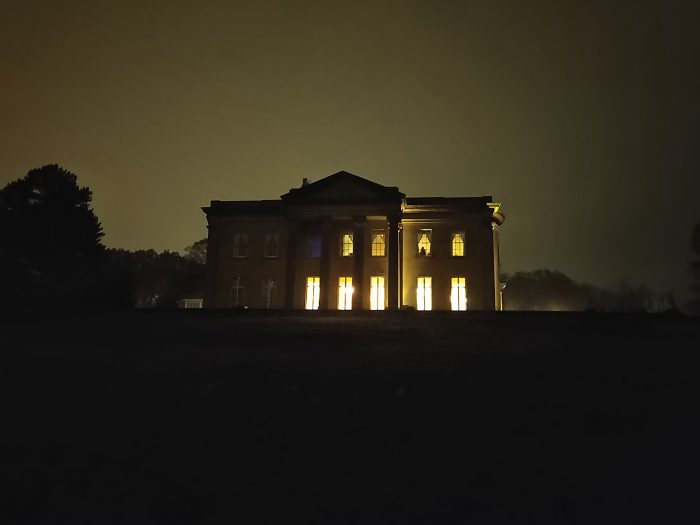 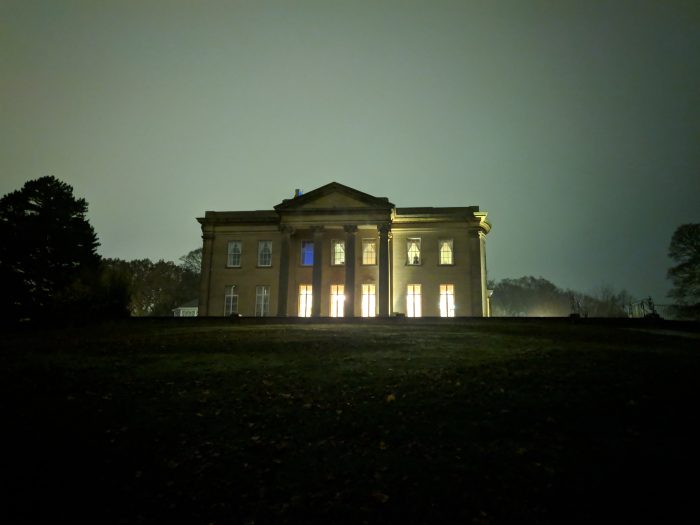 I said this is not an easy test for both devices and camera modes and I think this Manor House showcases that. Looking at the initial 6T photo taken in Auto Mode, you can get an indication of just how dark it is. I couldn’t see the yellow-orange glow with my own eyes, so I’m impressed that the camera in point-and-shoot mode can pick that up.

Nightscape really just bumps the levels a tiny amount. Everything is still a tiny bit muddy and there is plenty of noise — a given when there is so little light to latch on to. Night Sight on the 6T is much better, likely thanks to the slightly longer exposure time. You can see more detail is visible across the entire focal point of the image. 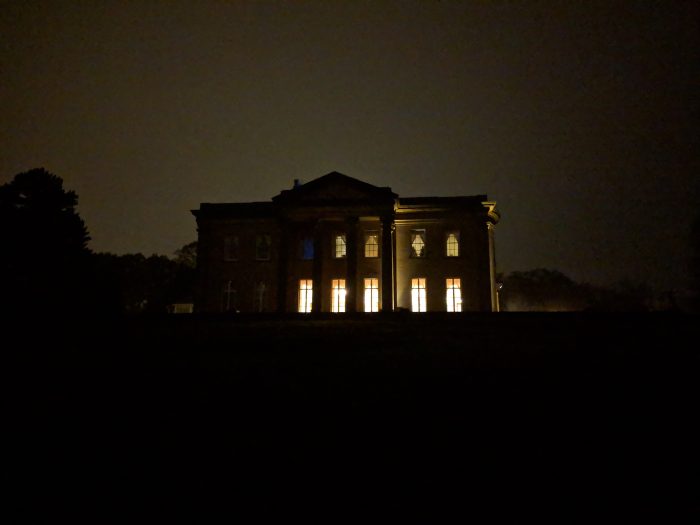 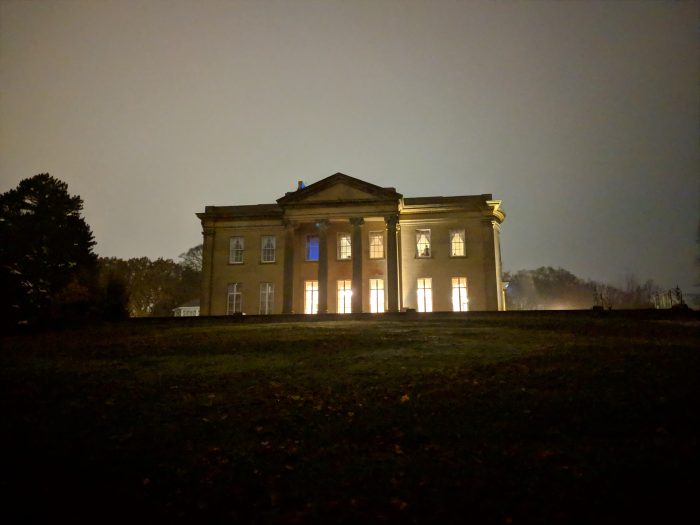 Not quite like night and day, but the Pixel can really do some impressive stuff in difficult conditions. Check out the left side and even the dim blue light in the top window. It’s these little unearthed extras that really do separate this camera and night mode with almost every other device on the market.

Whilst using Night Sight on the 6T resulted in a more steel-colored image, the Pixel has a warmer, appealing look. I guess that is a personal preference though. 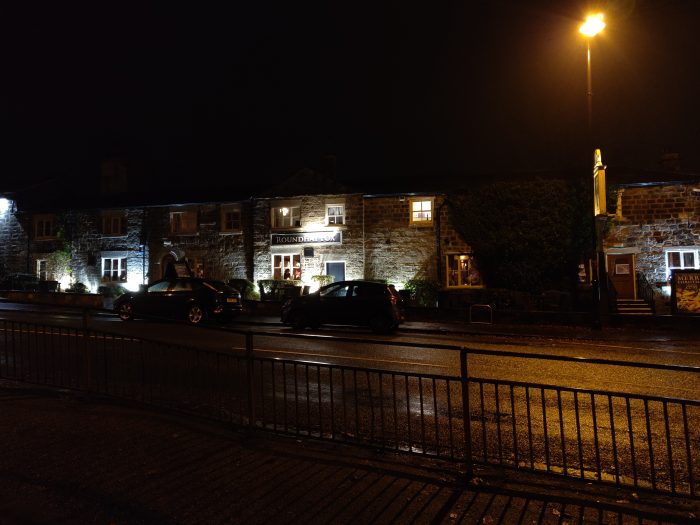 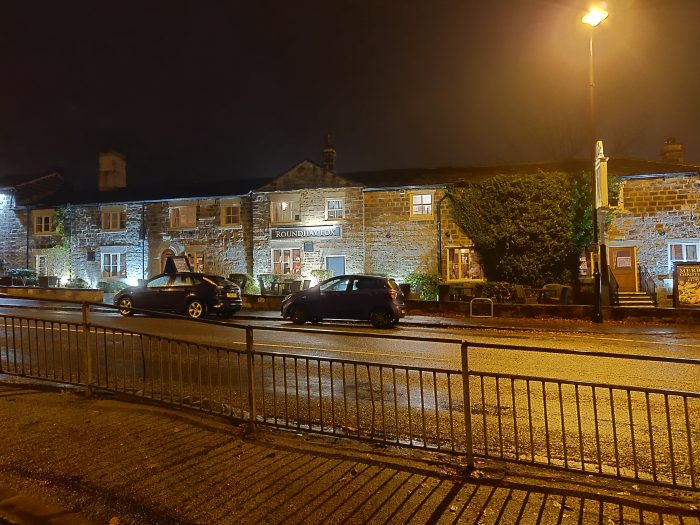 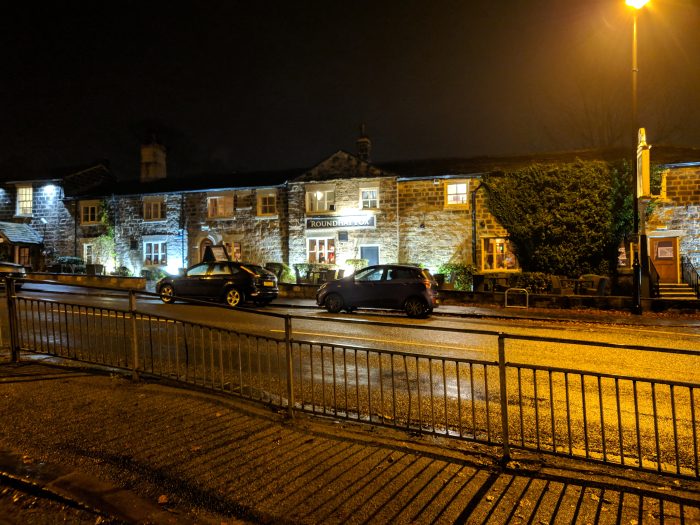 Shock, I took a picture of a pub in England. But I genuinely think this has a good assortment of lighting to really put Nightscape and Night Sight through a few gears. When browsing the thumbnails I have to say I like the (middle) Nightscape picture the best on the 6T.

On closer inspection, the image is too soft and Night Sight simply does a better job — even despite the sign (reads: “Roundhay Fox”) being blown out. It really is surprising how good a job Google has done with the software when you consider that this is a port onto hardware not technically supported by the Google Camera application. 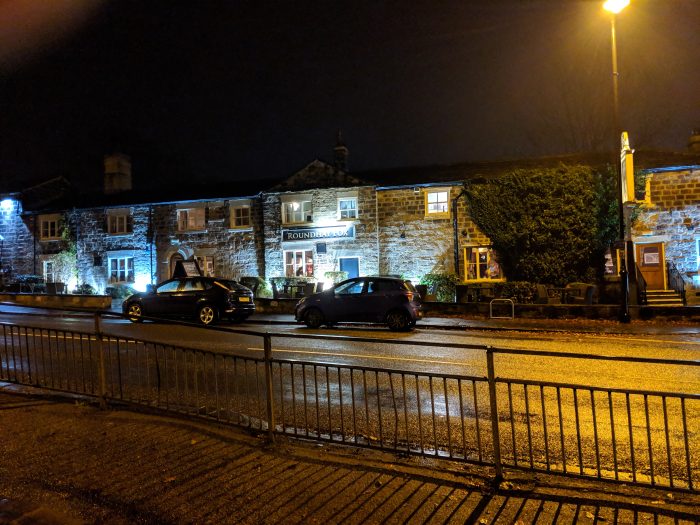 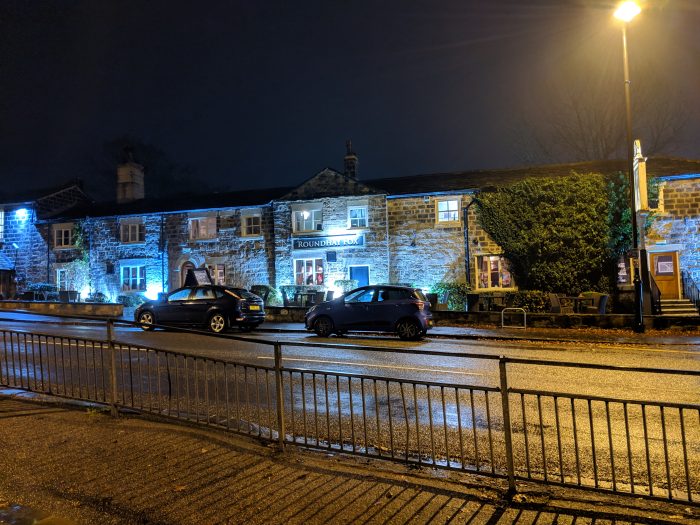 For starters, as we have seen already, the Pixel 3 XL camera can — in most cases — capture better auto mode images than the OnePlus 6T. In all honesty, I expected that prior to heading out to take any images but I was more shocked at how it performs against Night Sight. I’m surprised that the spotlighting was so blue when the long exposure mode has been used.

The overall effect is less prominent than it was in our initial test, I can’t say I’m a huge fan of the steel blue lighting. But overall both Pixel images are so much crisper than any of the OnePlus’ attempts. That said, I personally think the Pixel 3 XL in auto mode is my favourite. To be honest, it’s not exactly a great image from either camera in any shooting mode. 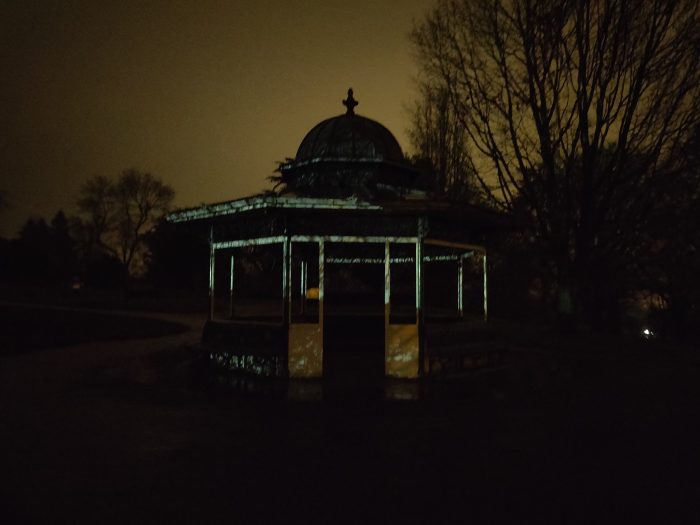 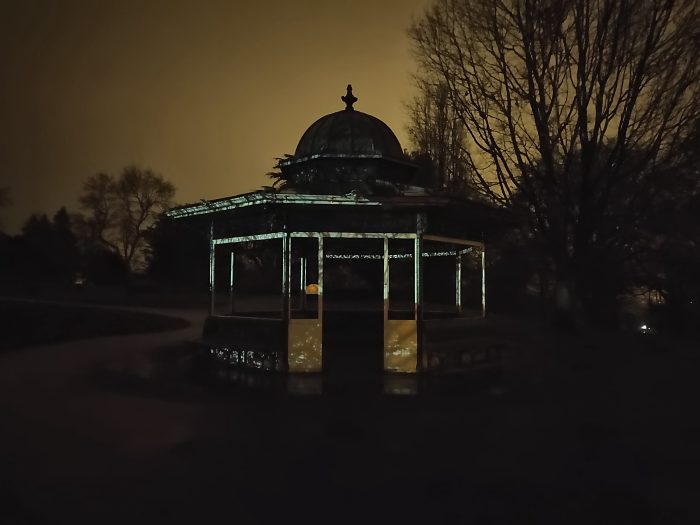 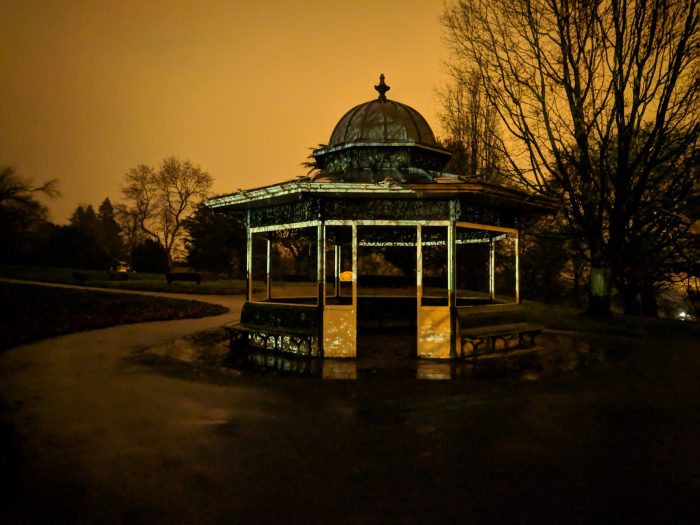 No spotlighting or particularly visible light sources here made me think it might be a good way to see if we can bring out some extra detail with both cameras and camera mods. It’s difficult to make out exactly what this is from the initial auto mode image, but it is a small pavilion — an outdoor covered seating area.

Skimming over the auto mode shot to Nightscape and there isn’t a massive discernible difference between the two — bar some increased sharpness. Our sideloaded version of Night Sight does some good things. Yes, we’re met with a yellow-orange tint which to be honest doesn’t ruin the photo. That said there is a distinct lack of detail and it is hanging on to that trademark OnePlus softness. 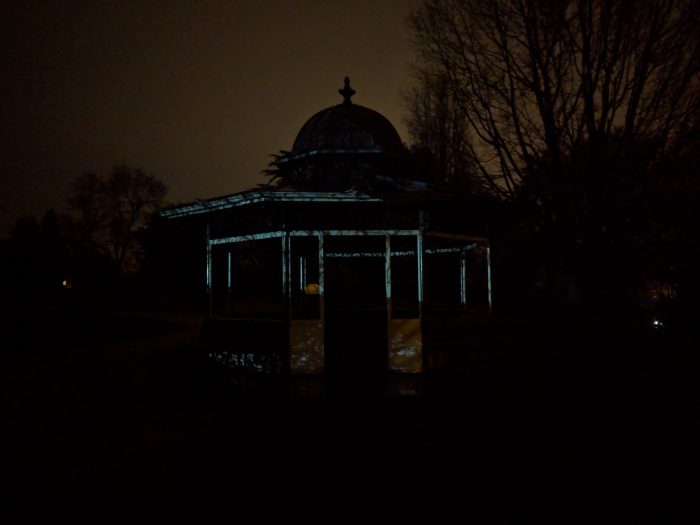 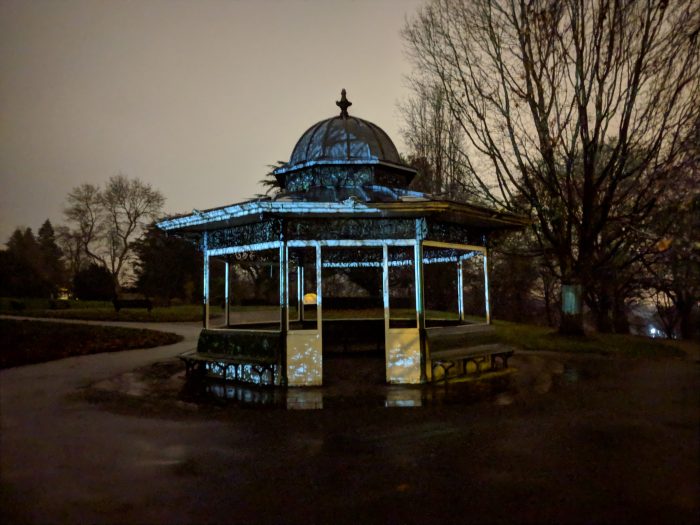 To be honest, the Pixel when in auto mode is very hit and miss with the darkness. Of course, why would you take an image in the pitch black in auto mode? That is exactly why Night Sight was created! Either way, the difference is abundantly clear that the colors and increased exposure on the Pixel 3 XL are better, but it suffers from a lack of clarity. 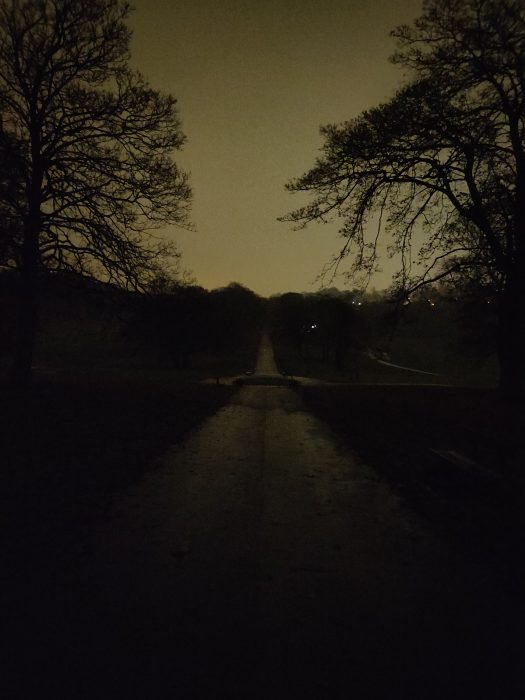 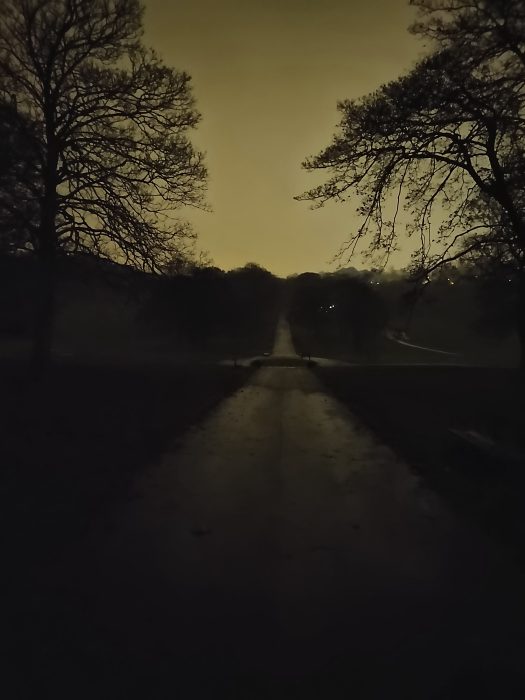 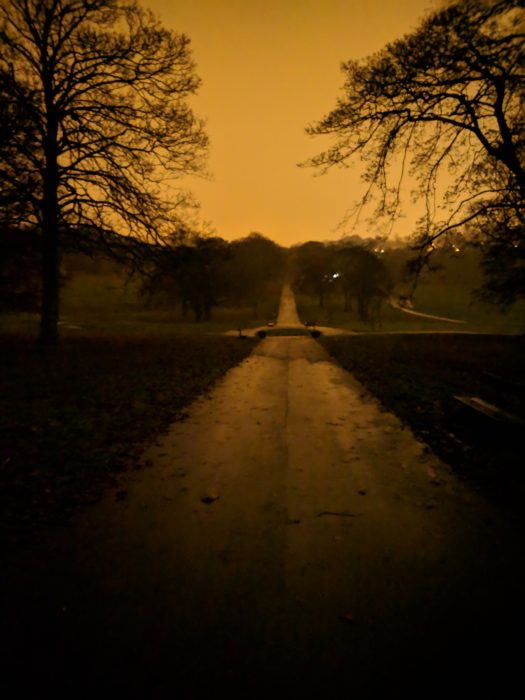 You wouldn’t take this picture regularly, it’s a bit unfair on any camera, but hey, it’s interesting to see what happens, right?

To give you an indication of just how dark it was, I was unable to go further than where this picture was taken due to not being able to see some steps ahead of me. Yes, that dark.

If you can make any major discernible difference between auto and Nightscape mode, then kudos to you. I can barely see any difference — if any. When firing up Night Sight you can see it does add in a bit of extra detail but the picture now glows orange. As I said, a little unfair but still impressive nonetheless. 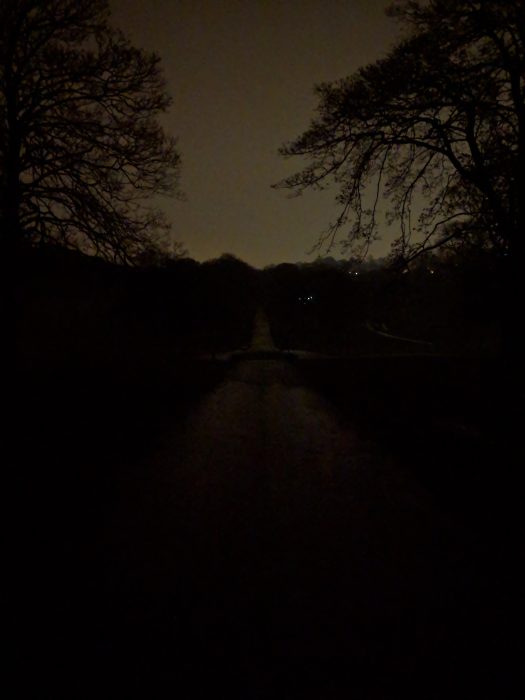 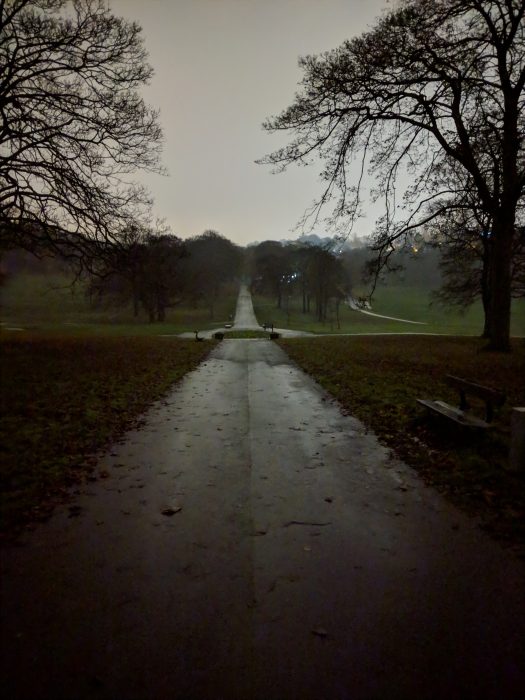 Oddly the Pixel 3 XL when in auto mode gives you an indication of just how dark it was. Take a look at that image in Night Sight mode though, it’s simply amazing. You could be forgiven for thinking it was taken just as the sun was setting on a dingy day rather than in the dead of night.

How is it picking up the colors and even shades of green and brown? I’ll leave it at that. Just wow.

Clearly, the hardware on the Pixel 3 XL and OnePlus 6T aren’t exactly comparable. The Pixel should best the 6T with the aide of that software post-processing. Nightscape is a bit hit and miss, but once you get Night Sight sideloaded onto your device you can tap into that Google computational photography goodness (even if it is at a slightly lower quality than on the real thing).

Night Sight is seriously impressive — but you already knew that. If this is just the beginning, then we can’t wait to see how it develops. If you’re a OnePlus 6 or OnePlus 6T owner then I’d 100% suggest downloading the ported Google Camera app to get in on the Night Sight action. As good as Nightscape can be, it simply can’t compete.

If you’re a Pixel user or OnePlus fan, we’d love to know your thoughts or even see some of your best shots with both modes (on both devices). Get your opinions and best photos right down there in the comments section.