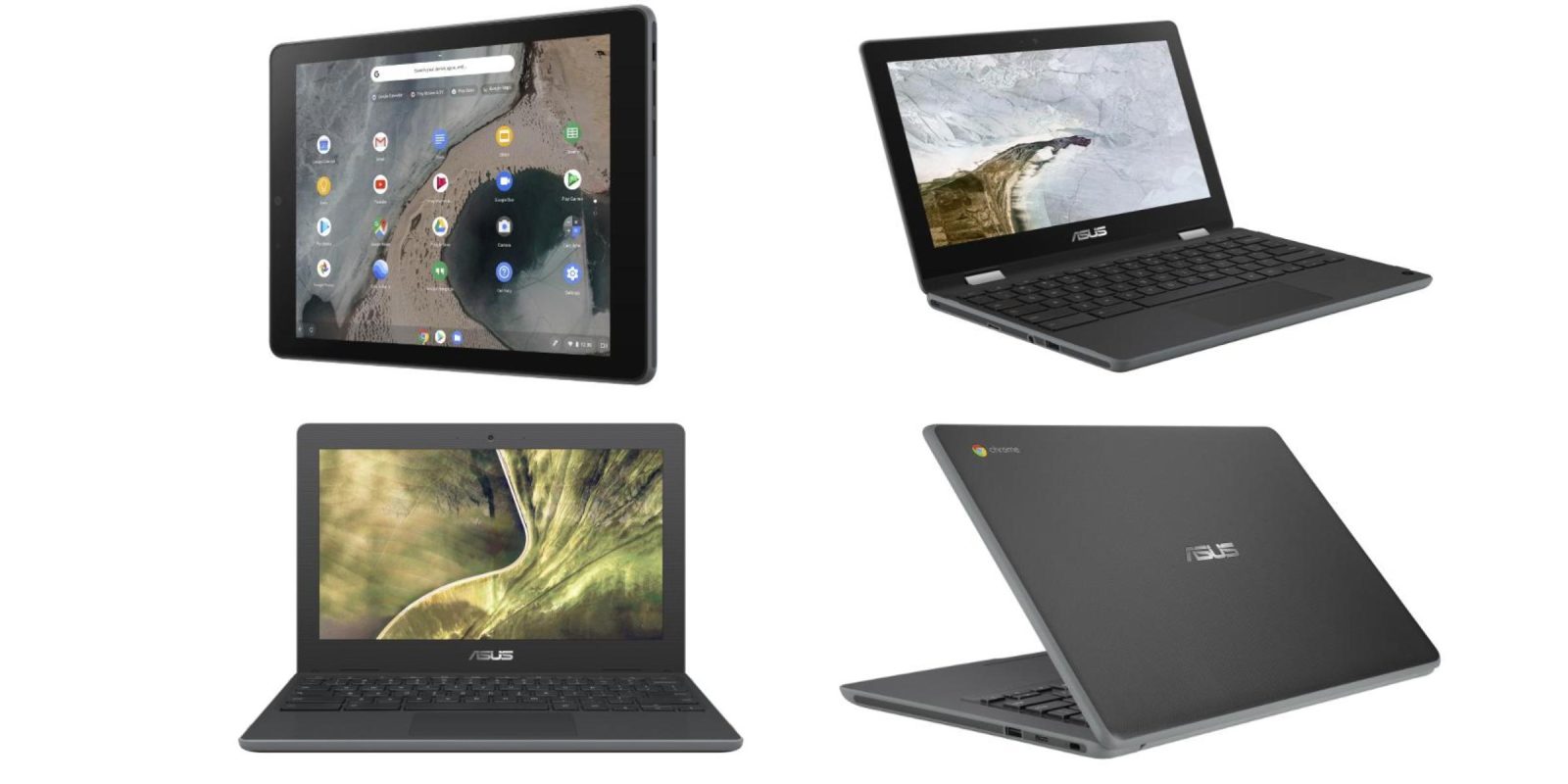 Ahead of CES 2019, Asus is launching four new Chromebooks all focussed on the education market with durability in mind. These rugged devices range from the 11.6-inch C204 to the 14-inch C403. Meanwhile, the Flip C214 is a new convertible, while Asus is also launching its first Chrome OS tablet with CT100.

Following the Acer Chromebook Tab 10 and Google’s Pixel Slate, the Asus Chromebook Tablet CT100 aims to be a rugged portable. Notable is the rubberized 10mm-thick chassis that’s rated for drops up to 100cm.

A 9.7-inch QXGA display supports stylus input with a built-in slot. This device is powered by a Google-optimized OP1 hexa-core processor — configured with two Cortex-A72 cores and four Cortex-A53 cores. Other specs include 4GB of RAM, 32GB of onboard storage, and charging via USB-C, as well as a microSD card reader and headphone jack. There is also a 2-megapixel front-facer and 5MP “world-facing” on the rear.

As a follow-up to last year’s C213, the Chromebook Flip C214 is a 2-in-1 convertible. Powered by a dual-core Intel Celeron, it’s configurable with up to 8GB of RAM and 64GB of internal storage that can be expanded via microSD. The left and right side of the device feature USB-C ports for convenient charging and hooking up an external display. Other connectivity options include USB-A and an audio jack.

The 11.6-inch display with a 360-degree hinge is centerpiece of this device. Asus offers a variant with built-in stylus that also features a brighter screen and Gorilla Glass 3 for working outdoors. A world-view camera is located in the bottom-right corner of the palm rest to help reduce obstruction. The Chromebook C214 will be available late spring.

The Chromebook C204 is today’s entry-level device. Like the tablet, the rubberized chassis is reinforced with thick bumpers on each corner to absorb shock and flat drops of up to 120 cm. An 11.6-inch display with 180 degree hinge allows for a completely flat configuration, while a touchscreen variant is also available.

This Chromebook is powered by a dual-core Intel Celeron with 4GB of RAM and 32GB of storage. In terms of connectivity, there are two USB-A and two USB-C ports, as well as microSD. A larger 50Wh battery should improve usage times, with availability slated for later this year.

Today’s last announcement from Asus is the Chromebook C403. Essentially, it’s a larger C204 that features a 14-inch display and another 180-degree hinge. Specs-wise it is identical, but the larger body allows for deeper key travel and louder speakers, as well as 11 hours of battery life. It will go on sale this spring.