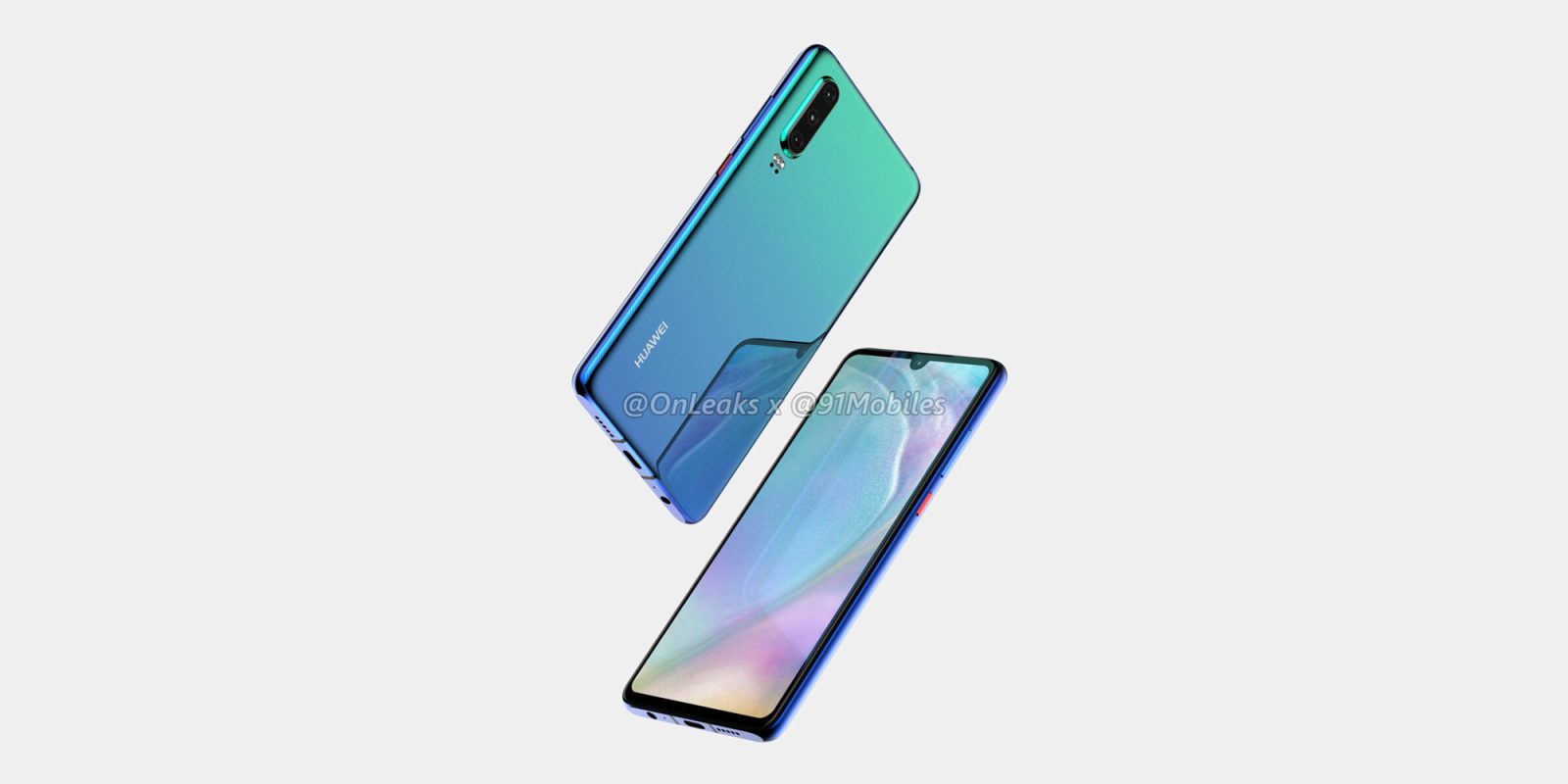 After the initial success and camera prowess of the Huawei P20 Pro and Huawei Mate 20 Pro, the next iteration from the brand is most definitely a hotly anticipated handset. Thanks to some leaked images and 360-degree video courtesy of 91Mobiles and @OnLeaks and case manufacturer Mobile Fun, we have our closest look yet at the upcoming Huawei P30.

In these leaks, we get an alleged glimpse of the upcoming rear camera layout of both devices, which will follow the design language of the P20 Pro. The standard Huawei P20 includes a triple camera setup whilst the Huawei P30 has a triple camera setup. Everything seemingly matches up with a few of the other leaks we’ve seen, that includes P30 Pro case leaks a few weeks back courtesy of Mobile Fun. However, there has been no other collaborating confirmation yet for the potential quad-camera setup we’ve been hearing about for the P30 Pro.

Huawei’s colors are always pretty striking, and their gradient finish is most definitely one of the nicest options in a lineup of black, white and plain-looking devices elsewhere on the market.

The vertical camera array isn’t as striking as the square stove-like array found on the Huawei Mate 20 and Mate 20 Pro. That said, Huawei has made a couple of tweaks to the layout found on the back of the P20. The camera flash has been moved beside the cameras now rather than being at the bottom of the camera setup.

Huawei has really done some interesting things with cameras and camera software in recent flagship releases, so the P30 will come packing some serious camera hardware. It should have some serious prowess thanks to a 38-megapixel RGB sensor that includes up to 5X optical zoom. AI-powered photography will naturally be part and parcel of this package too. 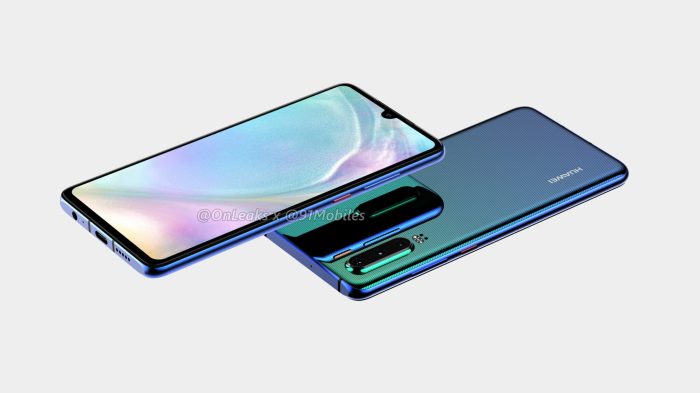 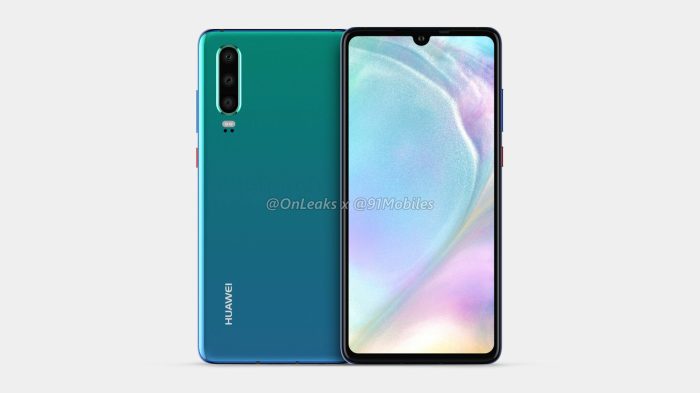 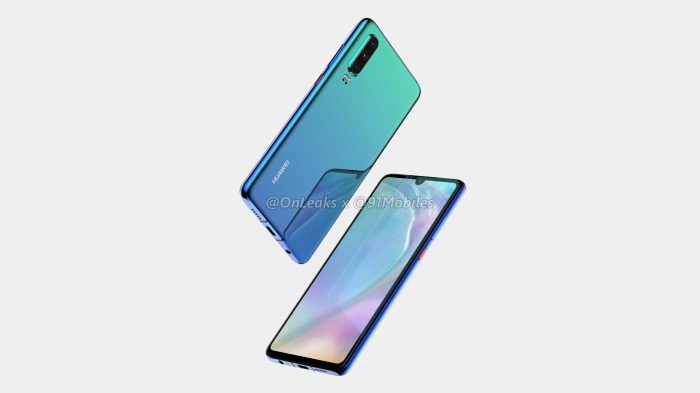 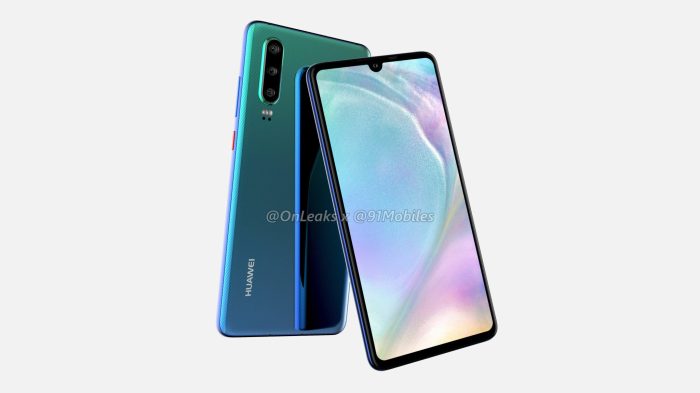 Round front is a teardrop notch, which seems a little out of sorts as the Huawei-made Honor View 20 and Huawei Nova 4 both include a punch-hole camera in the display. We have been told that this is device will not feature an OLED display, with this design currently only available on Samsung-made OLED displays. At 6-inches, this is a big device and should make it an excellent option for those who consume tons of media when mobile.

Another interesting thing we can glean from these two sets of images and device renders is the lack of rear fingerprint reader cutout. That points to a potential in-display fingerprint reader akin to the Huawei Mate 20 Pro — which was fast, accurate and would be a welcome compromise.

Beyond that, another welcome but weird inclusion could see the headphone port return. As these renders show the downward facing 3.5mm input port — not what we expected after we saw headphone cable connectivity removed on the superb Mate 20 Pro.

Other, pretty much standard inclusions will be the USB-C charge port, although we are in the dark as to whether this device will include the super fast charging seen on other Huawei models. That doesn’t mean we aren’t expecting or hoping for it though. 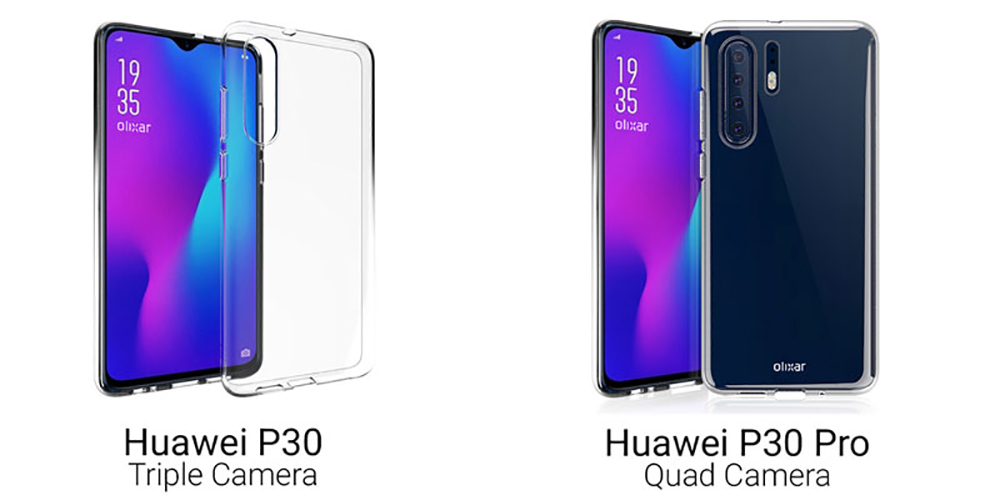 Beyond this we have very little detail about the display quality and the internals, although we would expect the P30 to come with a very similar set of specifications to the Huawei Mate 20, whilst the P30 Pro will likely lineup closer to the Mate 20 Pro.