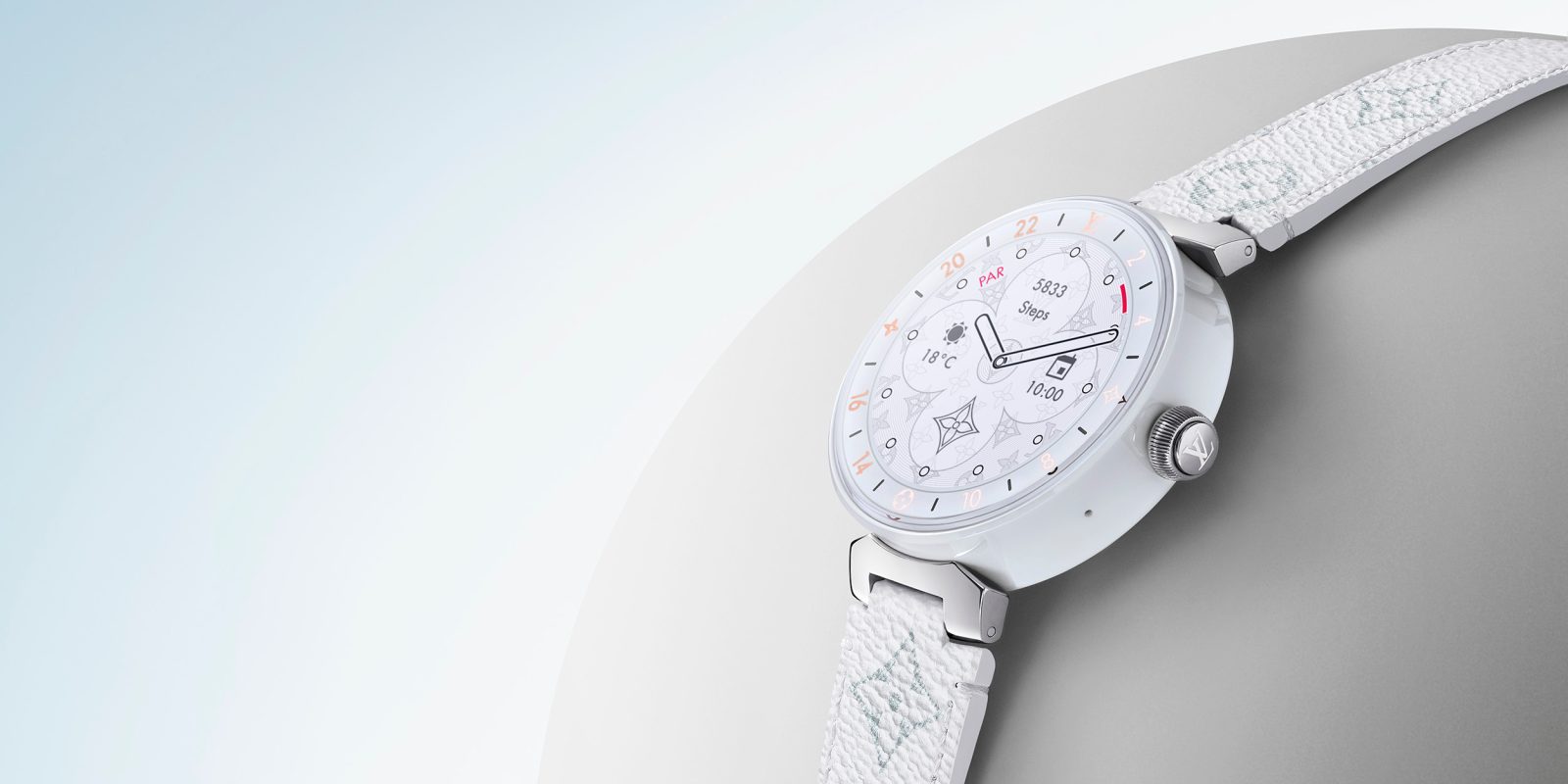 Wear OS may not be the dominant smartwatch platform today, but it’s on more hardware than any other. With 2018 behind us, the Louis Vuitton Tambour Horizon, powered by Google’s Wear OS, is getting refreshed for the new year with updated specs, a new variant, and more.

The Tambour Horizon first made its debut back in 2017 as a luxury fashion watch priced accordingly at $2,500. Now, the updated model is carrying over that same basic design, but with a few tweaks. One of the biggest changes comes under the hood with a Snapdragon Wear 3100 chipset. That shouldn’t come as a shock considering Louis Vuitton was one of the first brands mentioned for the chipset.

Louis Vuitton says that offers a day of battery life or 5 days with the watch-only mode out of the 300mAh battery. There’s also a 1.2-inch AMOLED display at 390×390 on board, just like the original. There’s also a new 24-hour ring around the bezel with day/night indicator that works even when the watch isn’t actively in use.

The spec sheet here also sees a big upgrade from other Wear OS watches. Where other 3100 watches like the Fossil Sport have just 4GB of storage and 512MB of RAM, the new Louis Vuitton Tambour Horizon offers 1GB of RAM and 8GB of storage. There’s also sapphire over that display versus glass. NFC is also built-in for Google Pay. 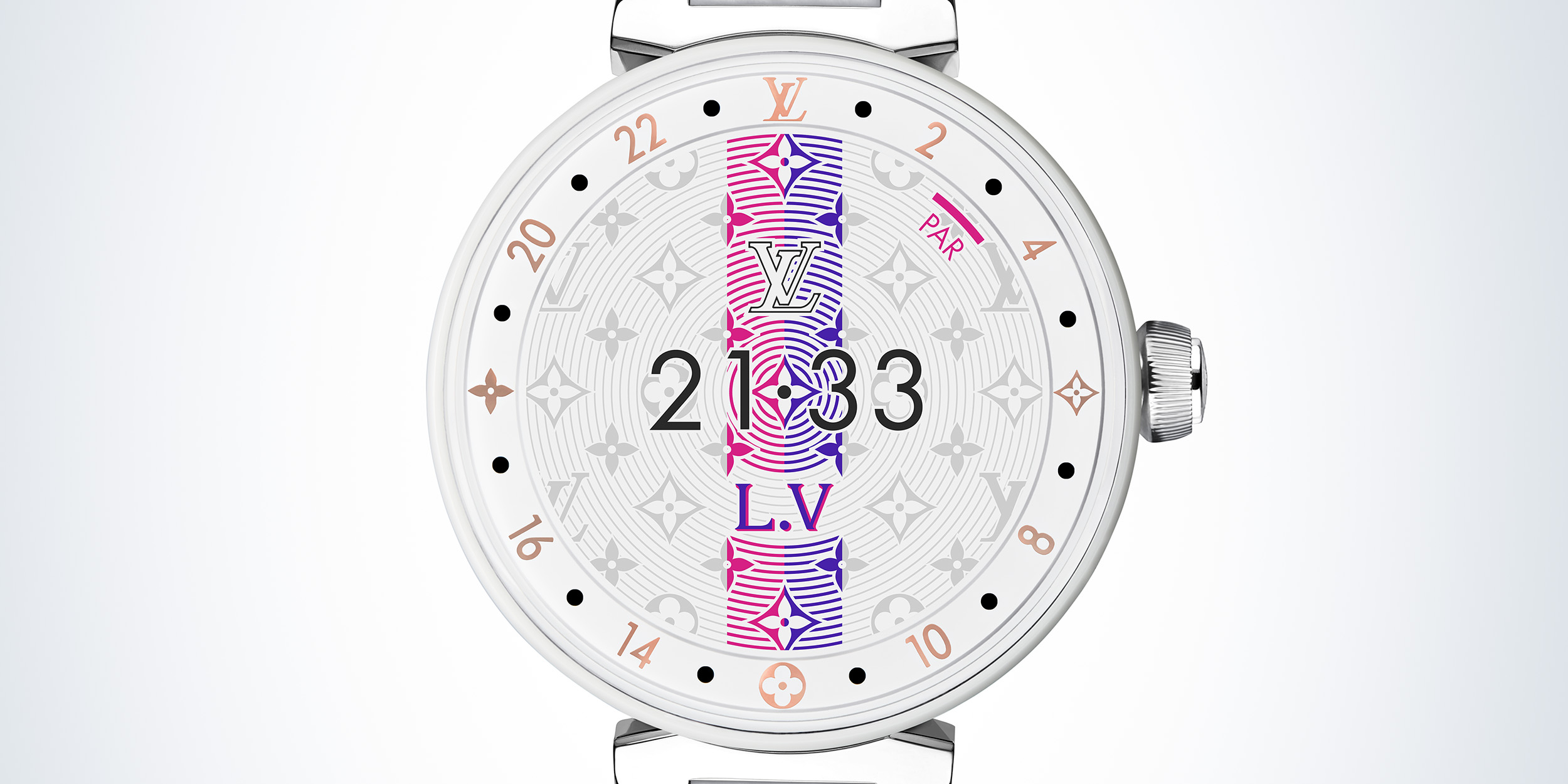 This new model also gets a ceramic white body in addition to the polished steel and matte black PVD designs. There’s also a rotating crown along the side that interacts with Wear OS. Louis Vuitton has also added “new exclusive options” for personalizing the built-in watchfaces. A new “My Travel” feature also gives users some handy features for trips.

The digital mode is embellished with emblematic motifs – Monogram, Damier, or even with the V for Gaston-Louis Vuitton. These have all been entirely reworked, deconstructed, and broken down to create transparent effects and contrasts with the Monogram Flowers…

Embodying Louis Vuitton’s art of travel, the Tambour Horizon watch enriches the “My Travel” experience by grouping all of your travel information together in one place. The dedicated watch faces sync with your hotel, flight or train bookings, as well as your departure and arrival times. Before, during and at the end of your journey, all of your essential travel information is displayed so that you have it constantly on hand.And finding the address of a hotel, restaurant or tourist site has never been so easy thanks to the exclusive City Guide function, featuring 30 international destinations…

Pricing and availability for the new Louis Vuitton Tambour Horizon haven’t been officially announced just yet. As mentioned, the original was priced at $2,500.

Update 1/28: Louis Vuitton has officially launched these updated models on its website with pricing starting at $2,550. It goes all the way up to $4,450, but all prices will vary depending on the band you select. Some models are out of stock at the moment, but several are available for shipping or store pickup now.