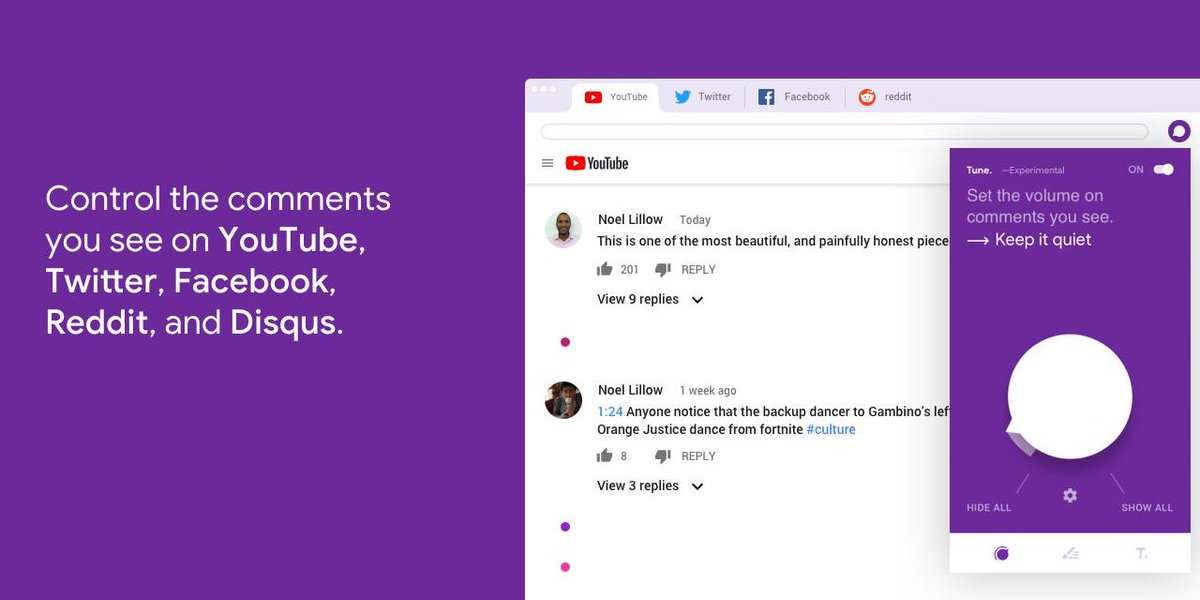 Jigsaw is an Alphabet incubator tasked with using technology to tackle global security challenges. Notable projects include protections against DDoS attacks and DNS manipulation. Its latest is a Chrome extension called Tune to filter out toxic online comments with machine learning.

In 2017, Jigsaw and Google announced the Perspective API that news organization and online communities could implement to filter out harassment. Instead of manual curation, machine learning is used to review comments and score toxicity. Partners like The New York Times, The Economist, and The Guardian have all experimented with the API.

Jigsaw is now bringing Perspective directly to users with a Chrome extension for Mac, Windows, Linux, and Chrome OS. Still an experiment, Tune lets you determine how much toxicity appears in comments on YouTube, Facebook, Twitter, Reddit, and Disqus.

A “volume” dial has a range of options from turning off all toxic comments to seeing everything: hide it all, keep it quiet, low, medium, loud, blaring, and show it all. Hidden comments feature a dot beside them that are color-coded to note the severity.

Tune also features the ability to filter toxicity, or a mix that allows users to show/hide comments that are an attack on identity, insult, profanity, threat, or sexually explicit.

Jigsaw notes that no personal data is stored, with comment text sent for scoring and then automatically deleted after ranking. Users do have to sign into their Google Account for initial access to the Perspective API.

We’re constantly working to improve the underlying technology, and users can easily give feedback right in the tool to help us improve our algorithms. Tune isn’t meant to be a solution for direct targets of harassment (for whom seeing direct threats can be vital for their safety), nor is Tune a solution for all toxicity. Rather, it’s an experiment to show people how machine learning technology can create new ways to empower people as they read discussions online.