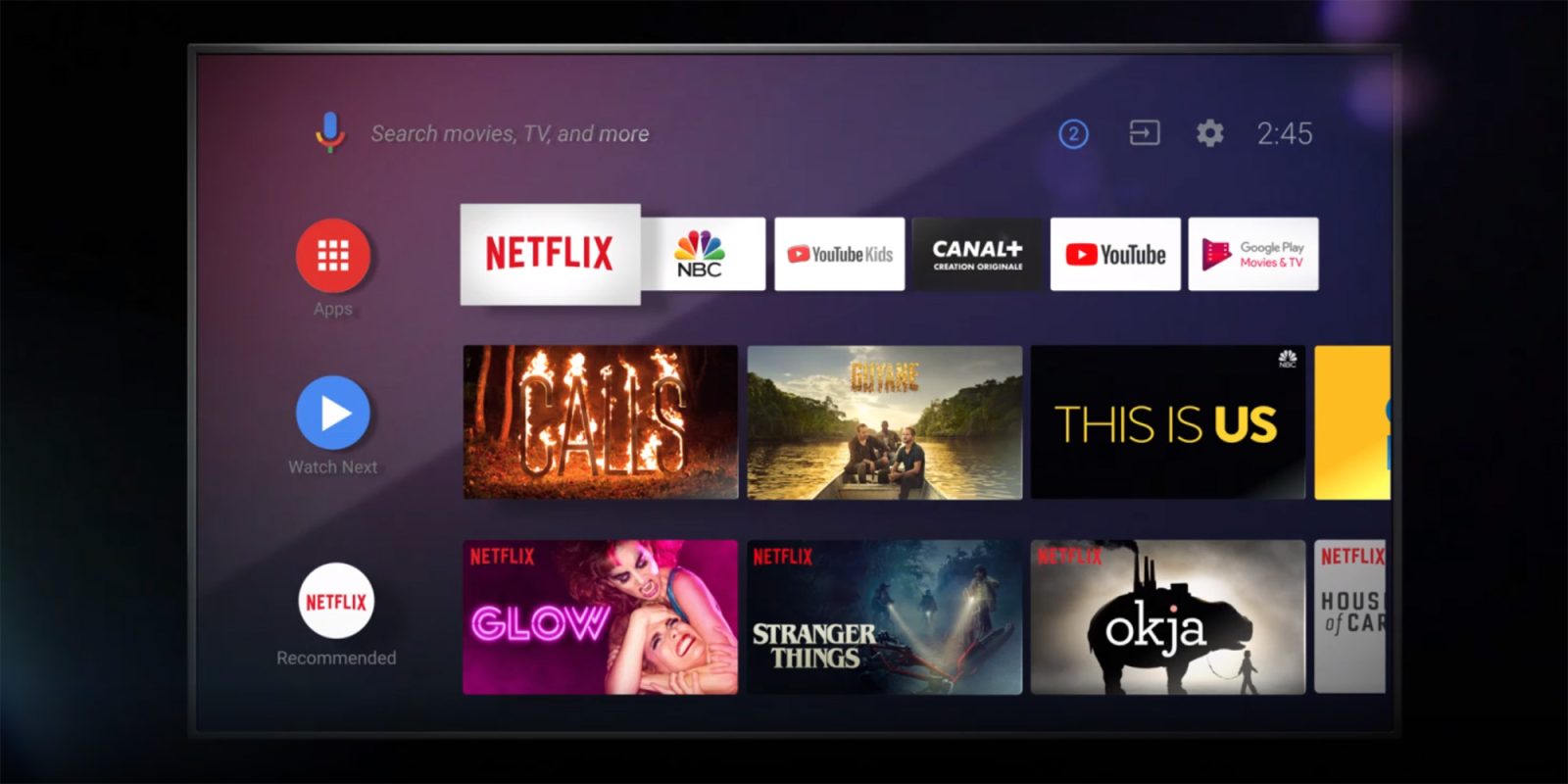 The past few months have shown that Google’s Android TV platform is growing incredibly fast. That growth, however, isn’t coming from consumer boxes. Rather, operator partners are the source of Android TV growth, and a conference this week shows off some incredible numbers for Google’s platform.

At the Connected TV World Summit in London this week, Google presented some data regarding Android TV momentum. This included some information on consumer-facing partners, such as Sony, Philips, Hisense, TCL, Skyworth, and more. However, the impressive data came from Android TV’s operator partners.

According to Google (via Twitter, @AndroidTV_Rumors), Pay TV operators have truly arrived en masse for Android TV. In 2016, just 8 operators were using Android TV, but in 2019 that number is a whopping 140. That’s impressive in just four years, but it’s also important to note that well over half of that growth came just in the past 12 months, as over 90 partners signed on between 2018 and 2019. 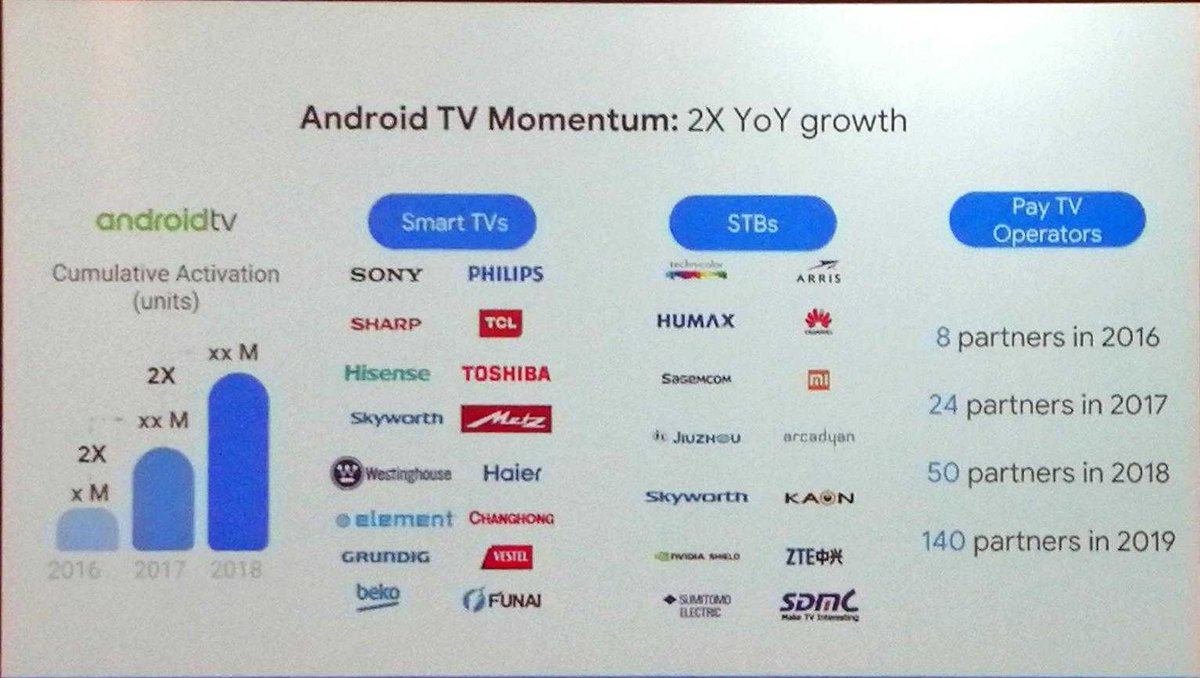 Reflecting the additional partners, Android TV itself has grown tremendously in active units. The platform has apparently doubled its number of units out in the wild each year since 2016. Clearly, Google’s platform is exploding, and as we explained last year, that’s for good reason.

Twitter user Martin Prins also shared a slide from Swisscom that explained the difference for operators when it comes to using AOSP versus Android TV. The TL;DR of this is that Android TV is better for convenience, as well as having lower startup costs, but that AOSP offers more flexibility in the long run.

Their take is that operators should use AOSP to build their experiences instead of Android TV, but it’s obvious that many operators are doing just the opposite. Another Twitter user captured a slide from Swisscom which explains what it would take for them to change their minds, and it involves Google giving operators far more control including skipping Android versions and not requiring Google Assistant to be displayed in an overlay.

To that end, Google also shared an interesting slide at CTVS. As shared by Shane Conway on Twitter, Google has explained why it is pushing Android TV so hard with Pay TV operators. The company explains that it benefits from the expansion of Android TV with better content distribution primarily. After all, the Play Store, YouTube, and Google Assistant are all core parts of these boxes. Further, Google gets a chance to help reduce fragmentation in Android. This is helped by the fact that Google has requirements for updates to be pushed, as we explained early this year.

Google also says that having more Pay TV operators using Android TV can “increase stickiness” by helping users with multiple Android devices in their home. The company also makes it clear in that slide that it doesn’t look to reduce operator control, collect viewing data, or seek a revenue share from operators that are using its platform. 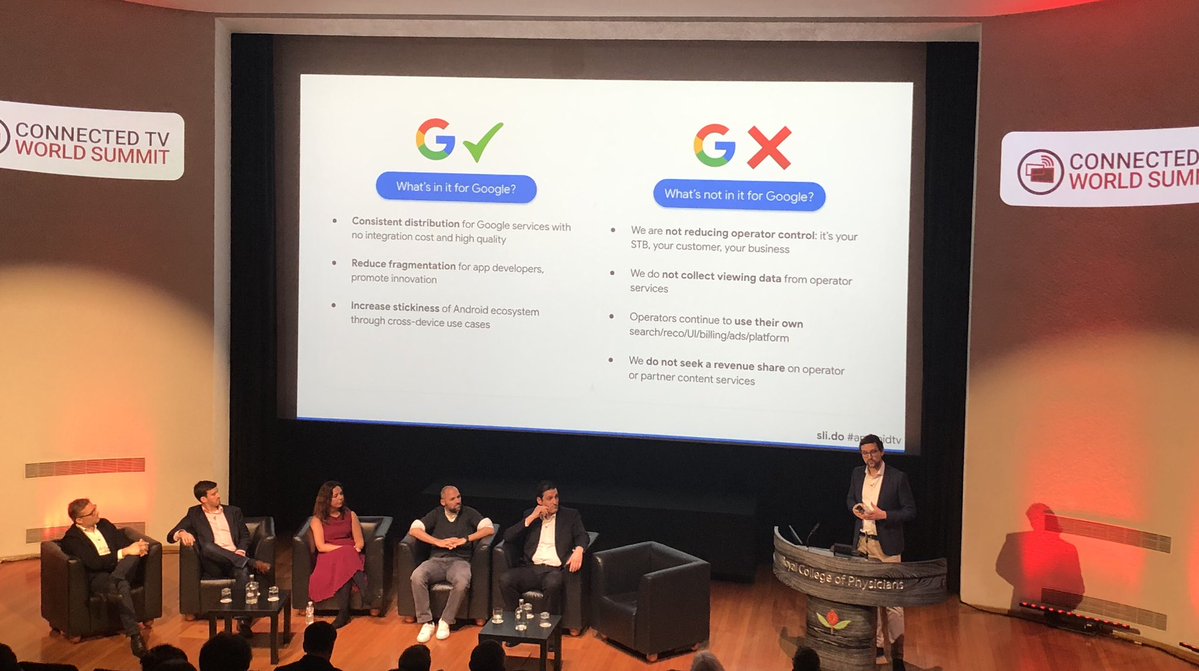