For the past several releases, we have been closely tracking the ability to play on-device audio files in YouTube Music for Android. This feature is a big step towards towards replacing Play Music, and is now beginning to appear for some users.

MSPoweruser has spotted the functionality live in YouTube Music. It resides in the existing Library tab that organizes your collection by Downloads, Playlists, Albums, Liked songs, and Artists.

On initial launch, a banner notes how “These songs can be played on their own, but can’t be added to queues or playlists with songs from YouTube Music.” We noted this limitation in a past APK Insight, and how it’s odd given that Play Music does not have a similar restriction. Another is the inability to “cast [device files] to another device.” Given how Google Cast works by sending streaming links, this is understandable. 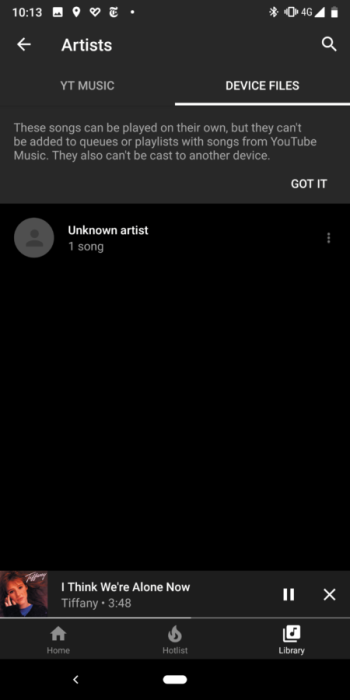 The functionality builds on basic support for playing local audio files added earlier this year to YouTube Music. One key difference today is the addition of a browser right within the app versus a player opening when clicking on music files elsewhere in Android.

This feature is key step towards YouTube Music replacing Play Music as the default audio player on Android. The OS needs a client that can handle audio playback, with Google readying the YouTube application to take on this role, and one day no longer needing to pre-install the Play app.

YouTube Music’s device files playback capability is not yet widely rolled out, and not appearing on any device running version 3.13 or earlier that we checked this morning.