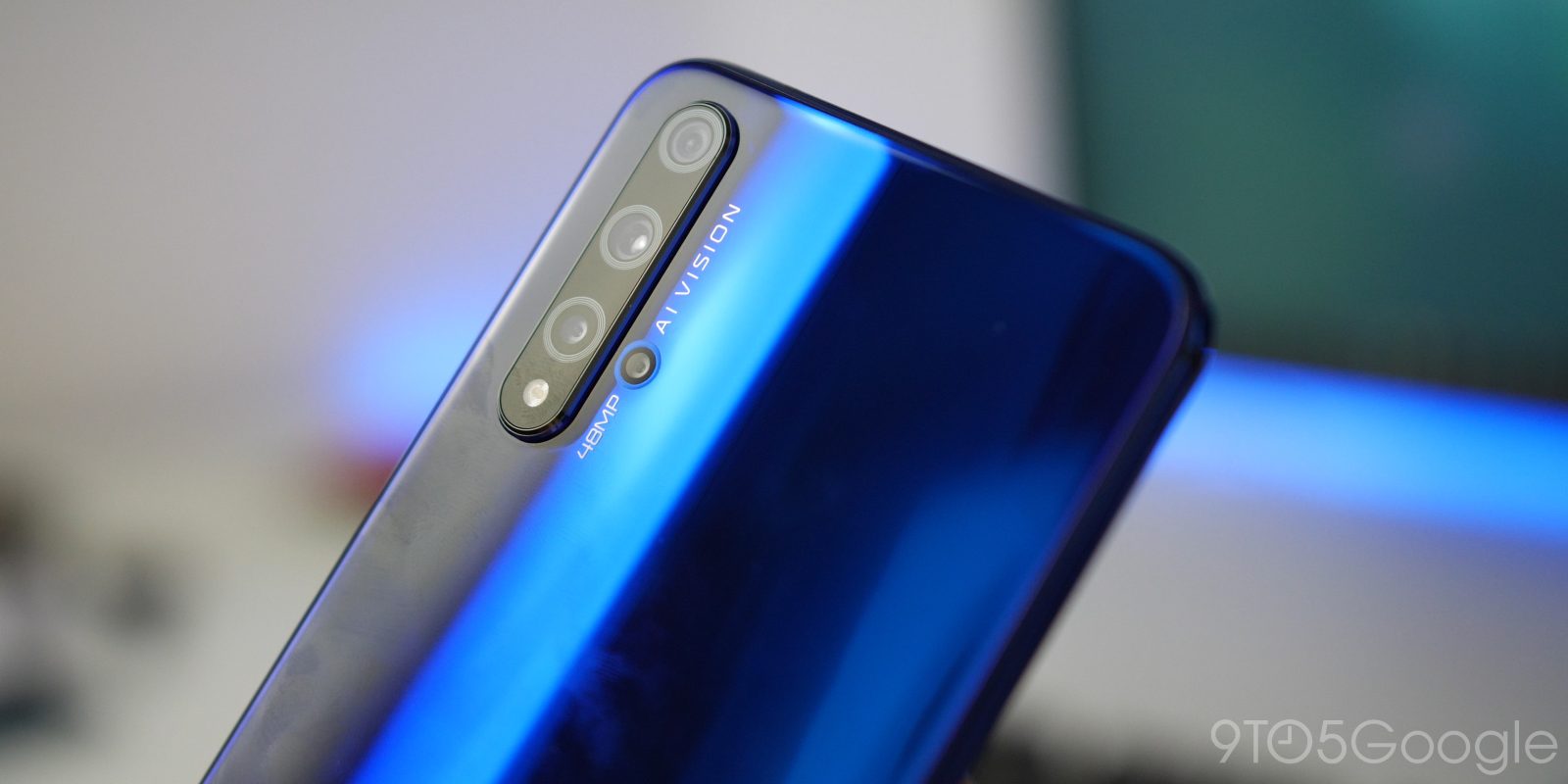 The Honor 20 is the latest device from the affordable Huawei subsidiary, and while the release has already been rocky due to the dark cloud that seems to be following the Chinese smartphone manufacturer around, it actually proves to be the perfect competitor for the Samsung Galaxy S10e.

While we are unsure what the future holds for Huawei in the Android space, there can be no doubt that this is a great affordable handset in some respects. The Honor 20 could genuinely be the last Huawei-made smartphones of note to come with support for real Android out of the box.

It’s worth pointing out that this is the mid-range device in the Honor 20 line. The bigger Honor 20 Pro is undoubtedly the flagship of the series, the Honor 20 is, therefore, a little stripped back to account for that ‘Pro’ version. That doesn’t make this a bad device — far from it — it just means that it is more a middling experience than a truly high-end one.

I have to say that the Honor 20 feels very much like the OnePlus 7 in many regards. What I mean is that it’s kind of a side note to the main meal in the form of a ‘Pro’ model. Does that mean it’s a bad experience though?

Add a dash of this, a little of that 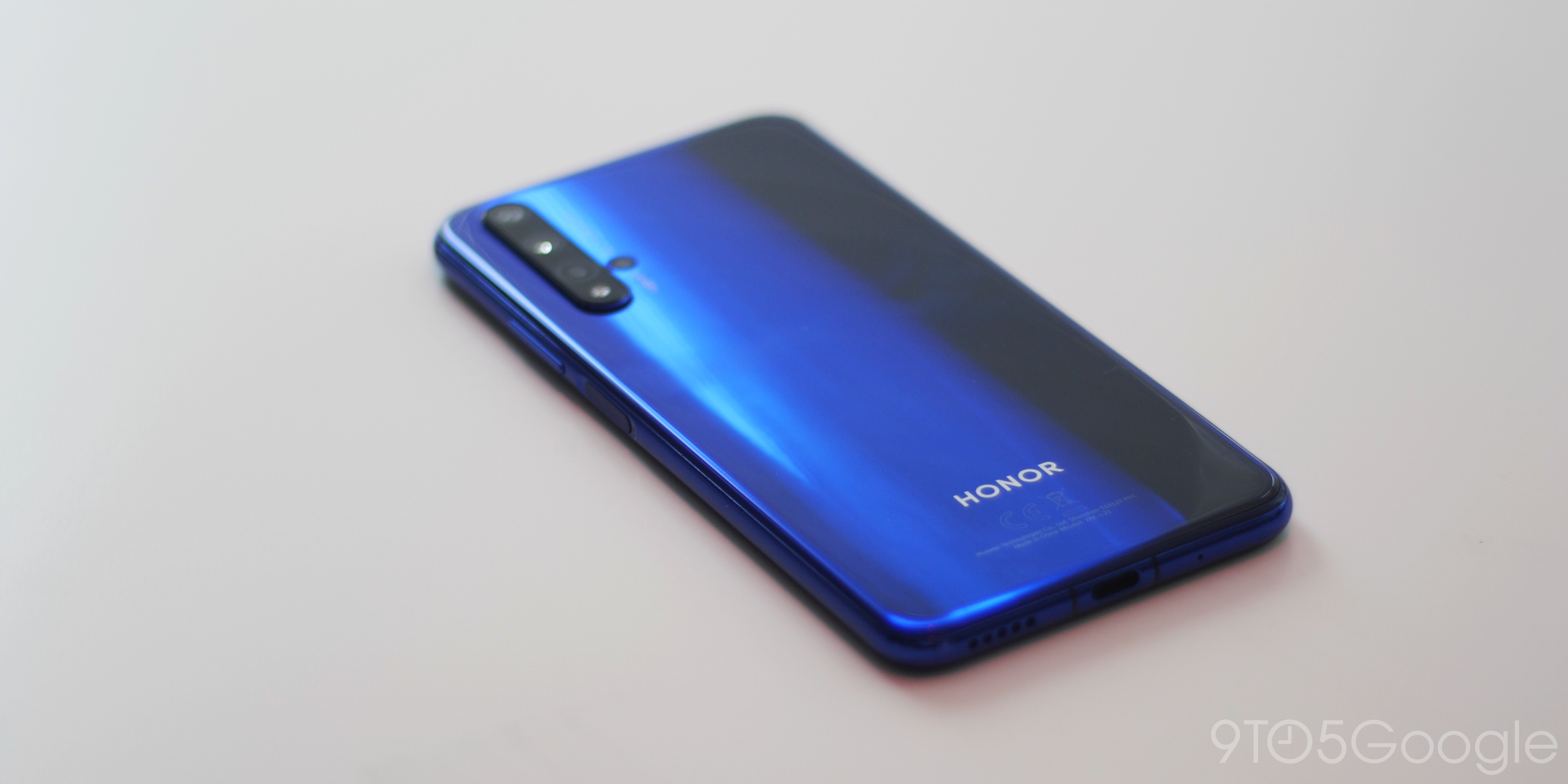 The hardware is an impressive mash-up of various industry trends all crammed into one product. Because of that, it feels very familiar in a number of key areas to many that are already available. The side-mounted capacitive fingerprint reader that doubles as a sleep-wake button is very much like the Samsung Galaxy S10e.

Around the back, the two-tone color is very much in the Huawei vein. The triple camera setup aligned to the upper left looks almost identical to the P30 Pro at first glance too. It doesn’t match the camera hardware though, taking quite the step down in overall power and performance — but more on this later on.

The internals are mostly a re-run of the standard Huawei P30 released back in February. That means the Kirin 980 chipset, 6GB of RAM and 128GB of internal storage. The cameras though are a combination of those found on the Honor View 20 and the Huawei P30. That means a 48-megapixel Sony IMX 586 main sensor with an f/1.8 aperture. You’re also given access to a 16-megapixel ultra-wide lens at f/2.2, a 2-megapixel depth sensor and 2-megapixel macro lens.

The battery is a little smaller than the Pro model at 3,750mAh compared to 4,000mAh. It does top up fast thanks to the in-the-box Super Charger, which consists of a 22.5W charge brick for lightning-quick battery boosts.

Measuring in at 6.2-inches, the 2340 x 1080 pixel display isn’t small or low resolution by any means, it is an LCD panel though. That means it lacks the real color depth that many will have become accustomed to with AMOLED panels. That said, it isn’t bad per se, it just isn’t quite as good as some other panels on similarly priced smartphones. That said, utilizing an LCD display does allow for gains to be made elsewhere in the hardware while keeping overall cost low.

You will also notice another familiar punch-hole in the display, it comes from another Honor device in the form of the Honor View 20. As I said, this device mixes up much of what we’ve seen on other handsets into one pretty affordable package. I also have to say that the punch-hole is still my preferred option over a dipped notch. It also doesn’t detract from what is a pretty solid LCD display.

I must also say that I really like the side-mounted fingerprint reader too, as it sits in just about the perfect position when I grasp the Honor 20. It also helps that unlock speeds are pretty darn fast. I would love to see more manufacturers opt for a sleep-wake button fingerprint reader rather than an in-display option if I’m completely honest.

Overall the entire device is clearly well put together and genuinely looks good given the glass sandwich design. In the hand, it has a reassuring heft but genuinely only weighs in at 174g, which is surprising as it feels much more ‘meaty’.

Still feels like an iOS clone with some Android extras 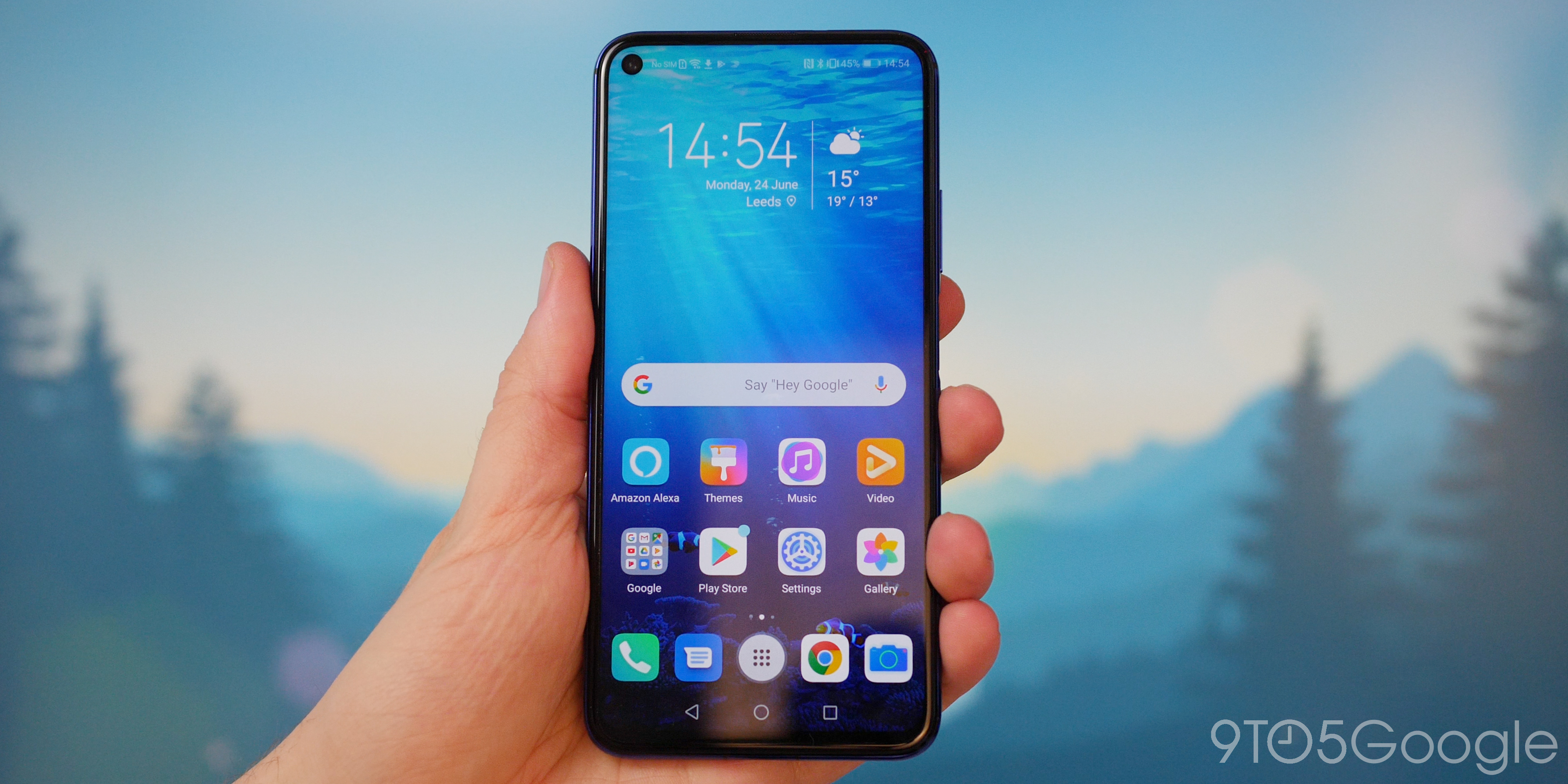 The Honor 20 comes with Magic UI 2 a fork of EMUI 9 out of the box, which is quite a heavy skin atop Android 9.0 Pie. Given the weight of the alterations, it helps that the Kirin 980 is a powerhouse of a CPU as it chews through day-to-day tasks with aplomb.

That said, I have made it clear in past reviews of Huawei and Honor devices that I am not a huge fan of the iOS-inspired look and feel. You’re treated to quite a few duplicate apps, which is frustrating as it is confusing. There are some additions that I really do like, notably the ability to scan a QR code to add a contact and the HiVision tweaks which work like a suped-up Google Lens. Those kind of tweaks are very welcome but sometimes other little additions do make very little sense.

One big area that is massively frustrating is the inclusion of a suite of pre-installed third-party of apps. Facebook, the Fortnite Installer, Facebook Messenger, Booking.com and Amazon are all present before you even set up your own. Duplicate apps also play a big role in Magic UI 2, double browsers, email, calendar and a few more on top. As I said, it’s a confusing overall experience at times.

Honor and Huawei really need to work on this. Given the concerns over whether we’ll see a new Huawei-developed OS, intrusive pre-installed apps could become much more apparent should the reported HongMeng OS see the light of day. I’m not sure about you but I am not confident I could deal with using Huawei Mail over Gmail. I’m almost certain that many Huawei and Honor smartphone owners globally won’t either.

Despite the bloat, the Honor 20 genuinely flies. Which is a testament to the power of the Kirin 980 chipset. It truly is a top-tier chipset that handles anything and everything without slowdown or hiccups in almost every single task or process.

Good but not quite great 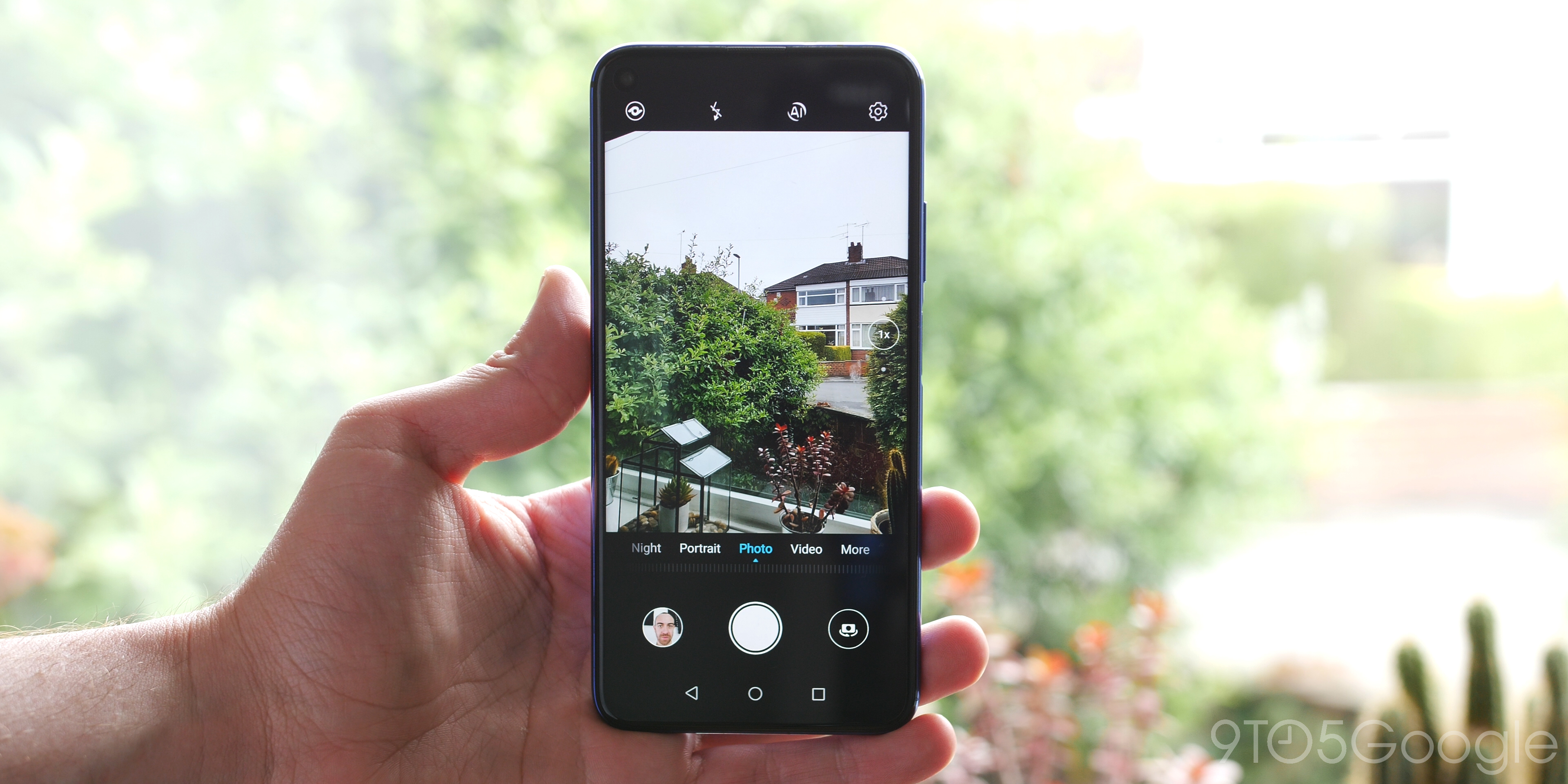 Given that the camera offers an array of focal lengths and therefore a solid amount of flexibility, you will be pleased to hear that images are pretty accurate with good detail. For the target market, I’m sure the Honor 20 will provide a superb overall camera experience.

I have found images to be lovely and vibrant but I find that sometimes they can look a little soft. The wide-angle and macro shots being particularly wooly when viewed on a big display. Overall though, the colors are pretty good and the wealth of modes is something that not many other competitor smartphones can offer.

At the front, the punch-hole contains a 32-megapixel camera, that I find to be very crisp and clean. The mirror-mode also gives you a different perspective on your own selfies too. I have found the biggest downside to the up left punch-hole is remembering to look directly into the camera, as it does feel a little unnatural to do so.

In video modes, 4K recording is only available up to 30fps and comes with EIS rather than OIS. That is a little disappointing but the overall end results are pretty sold. Dynamic range is very good when recording and it does look spot on for the most part. 1080p offers the most camera recording modes but naturally feels a little softer than the ultra-sharp 4K footage we are all slowly moving towards.

All day and then some 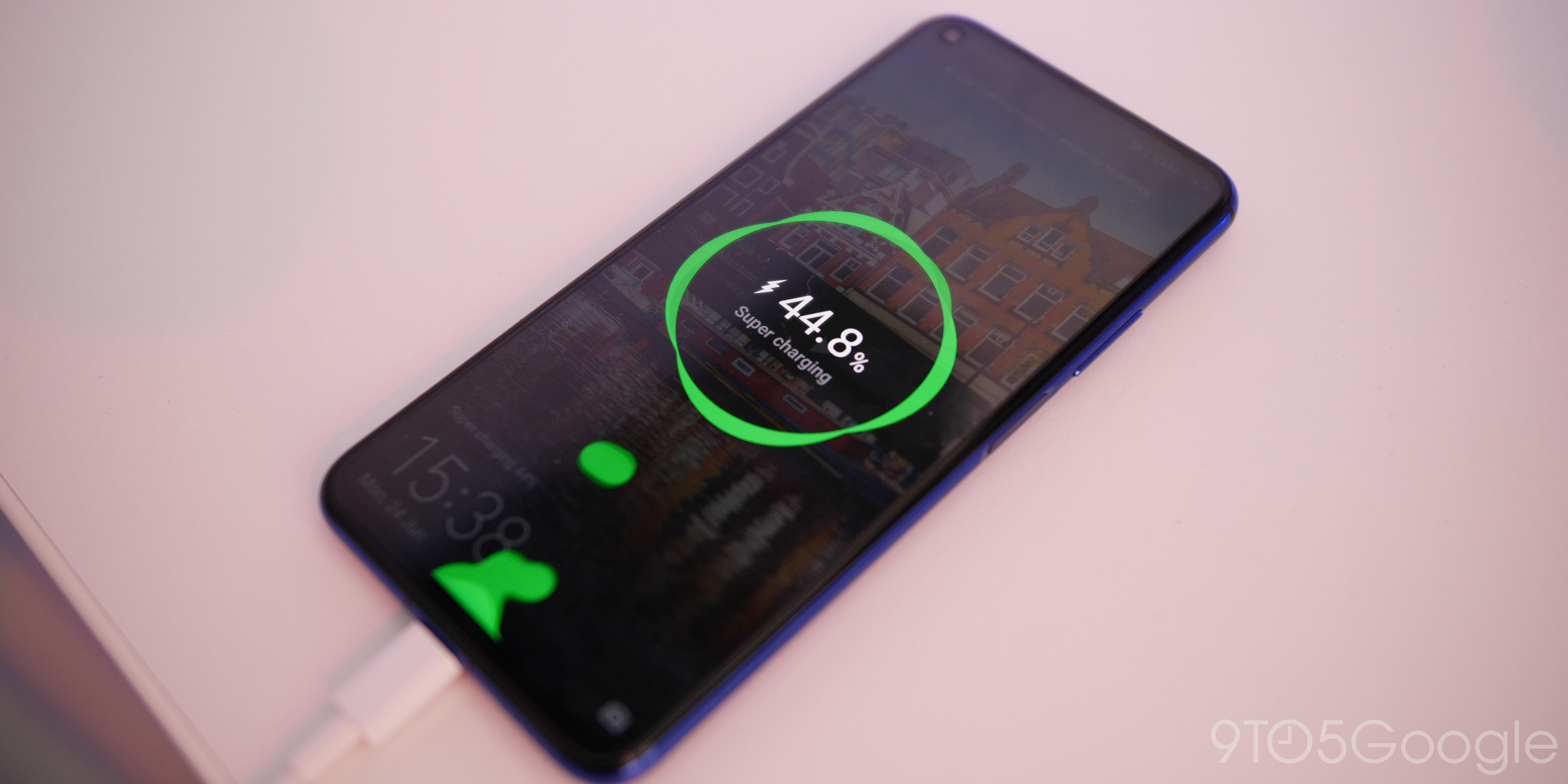 Like Huawei devices, Honor achieves battery excellence in much the same way. So long as you’re not playing games almost constantly, I think that for most people a full day of heavy usage is more than attainable. I managed to have plenty of battery left over at the end of every single day using the Honor 20 — which is more than can be said about many other devices at the same price point.

Getting that 3,750mAh back up to 100% is pretty rapid too. The in-the-box 22.5W SuperCharge brick powers the phone up in no time. It takes around 30 minutes to go from zero to 50 per cent but my experience was it was a tad slower — not that I am complaining.

A questionable buy even with a solid experience and price

The biggest problem with any Huawei or Honor device — including the Honor 20 — at this point in time is the distinct lack of clarity surrounding the ongoing US trade ban. You would expect that the issues will all be cleared up in good time but for now, it genuinely makes it hard to recommend that you part with your hard earned cash for a phone that might genuinely lose access to the core OS you likely buy it for.

If you are more confident than I am that the US-Huawei relationship will be patched up before the 90-day reprieve is up, then the Honor 20 is a solid mid-range and mid-budget smartphone that takes so many ideas from other devices and merges them into an enticing affordable package.

Another issue you will contend with will be the lack of availability in some regions. In Europe, it’s not exactly difficult to get hold of Huawei or Honor devices — at least currently. In the United States, you will face quite a few barriers before you can get your hands on the Honor 20. FedEx issues aside, you have zero real support and then potentially a handset that might never get another ‘official’ Android build after August 2019.

To be honest, in the US the Samsung Galaxy S10e offers a similar experience in most regards without any software or availability issues. For those of us in the rest of the world, the Honor 20 is a solid purchase but I hesitate to fully recommend it over the OnePlus 7 or even the now more affordable Mate 20 Pro — if a Huawei-made phone is a must for you.

Where to get the Honor 20

If you are in the US and still want to get hold of the Honor 20, you may have to go to sites like eBay or deal with third-party sellers on Amazon to purchase the device. In Europe, you can pick up the device from carriers like Three UK, Carphone Warehouse and even Amazon UK.