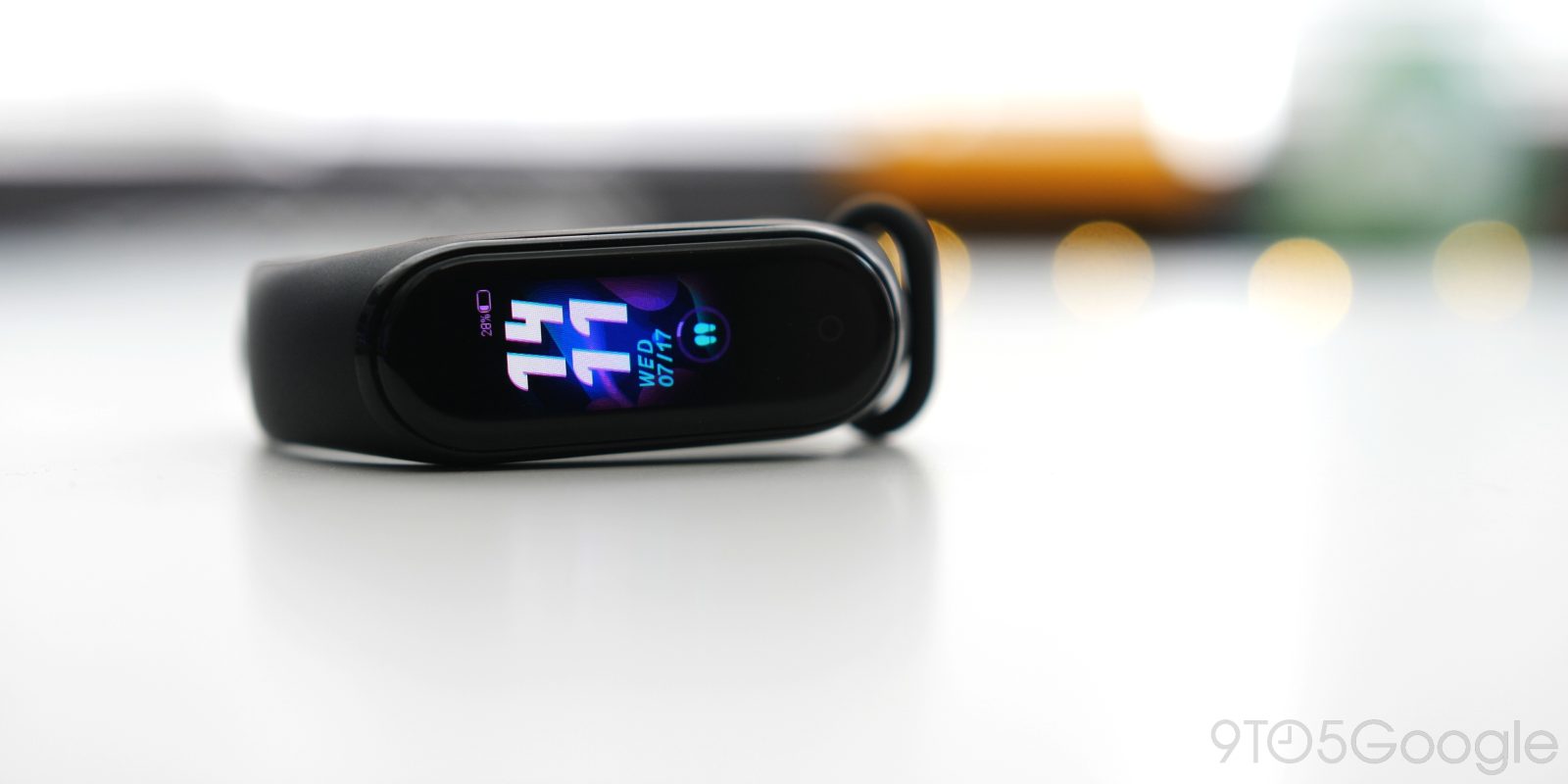 When I reviewed the Xiaomi Mi Band 3, I was convinced that it was one of the best Google Fit companions. What I didn’t expect was Xiaomi to make what you could consider iterative changes and still make the Mi Band 4 feel like a must-have wearable.

For starters, considering that Wear OS is still really in a state of disrepair, things couldn’t be more different in the fitness band (or fitness watch) market. Until the Mi Band 4 arrived, I had worn the previous version pretty consistently for the better part of nine months. As a gym and sports companion, it was just that good in my experience.

At just under that ‘sweet spot’ of $50, you just get so much bang for your buck. The refreshed model of the Mi Band retains all the same features that have made it so popular and one of the best fitness bands on the entire market. Normally iterative updates can feel a lot like a company cashing in but that really isn’t the case with the Mi Band 4. It enhances every aspect and does so without a massive price hike — it has more than enough new additions and extras to make taking a closer look well worth it.

Refresh with a hint of a revamp

From a distance or at a glance, it’s actually quite hard to tell the Mi Band 3 and 4 apart. It still looks almost identical until you inspect further. The lovely little dimple that acted as the main ‘button’ has been removed — and that makes me quite sad. Instead, you get a small flat circular capacitive touch button. It isn’t quite as nice to use but it works in the exact same way.

The biggest addition is the 0.95-inch color AMOLED display that is a massive upgrade over the 0.78-inch monochrome display seen on the Mi Band 3. I was very excited to see it in the flesh and I was not disappointed. The 120 by 240-pixel display can reach a maximum brightness of 400 nits, which I found was just about enough to view in bright daylight. 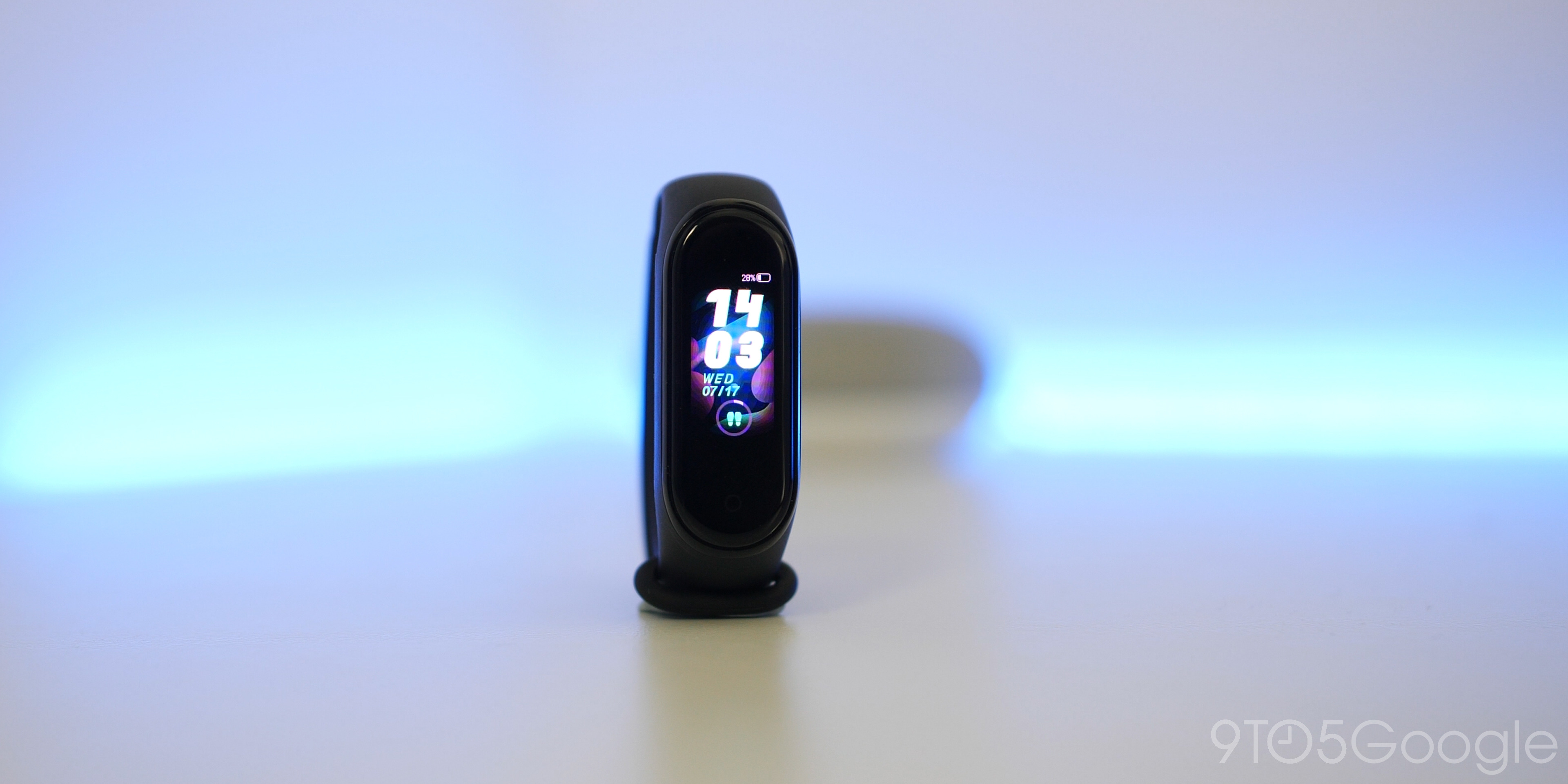 I’m not sure if the color display is the reason why the shape of the Mi Band 4 is flatter than the curvier Mi Band 3, but it doesn’t make a great deal of difference. I will say that the flat display is actually easier to use than the curved display with sweaty hands.

Despite quite a substantial increase in display size, the Mi Band 4 still only weighs in at 22g. For something designed for fitness wear, it is just the perfect weight. The silicone strap is also really comfortable. It is pretty much the exact same strap as found on previous Mi Band models. You snap it into the loop that is best suited for your wrist. You can get replacement straps too should they wear out.

I found that on my Mi Band 3, the silicone strap did get a little slack over time. I can imagine the same will happen the longer I wear the Mi Band 4. It can’t imagine it will affect most people though unless you go swimming a ton — as chlorine can make watch straps brittle over time.

The new design retains water-resistance to 50 meters or 5 atmospheres which means the Mi Band 4 is the ideal swimming fitness band. I must say that I do prefer the slightly more bubbly design of the Mi Band 3 — especially the capacitive button — but I do like the familiar look and feel of the Mi Band 4.

More of the same 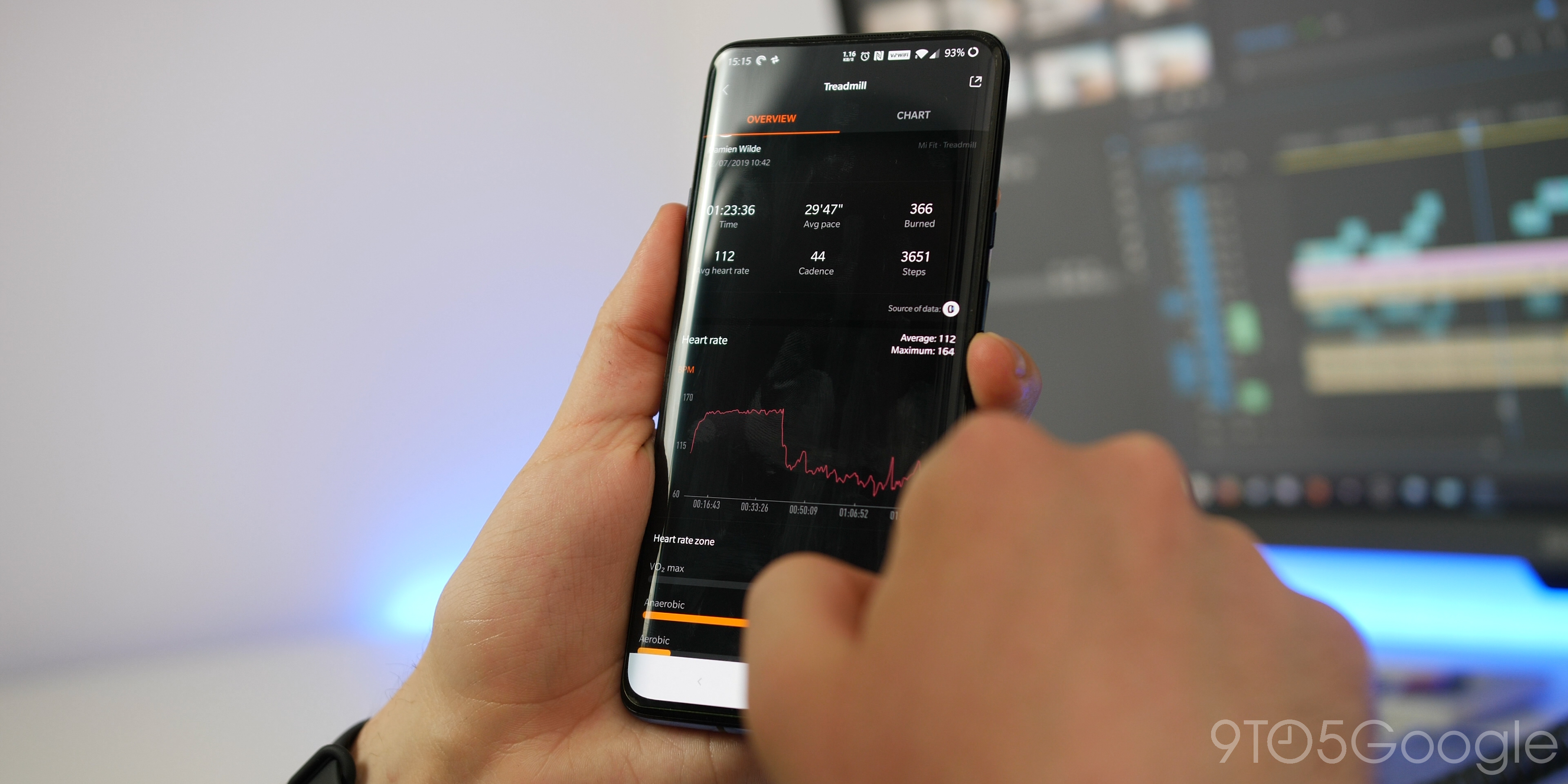 To set up the Mi Band 4 you’re reliant on the Mi Fit app, which is frustrating as it is feature-packed. It can be linked to your Google Fit account right away, which is nice but in the process of unlinking my Mi Band 3, I now can’t link properly to my Mi Band 4. This issue has affected more than just myself though, as we recently reported.

While that is my problem, the workout tracking features prove to be pretty accurate in my experience. There are some new swimming modes that can help the band work out your strokes, the distance you’ve covered, calories burned, the exact number of strokes, and then it pumps out a score so you can analyze your own performance.

I will say that the limitations that were found on the Band 3 return here. It’s still disappointing to have so few exercises in-built and trackable. If your workouts involve weightlifting rather than cardio, you might wish to look elsewhere or seek an alternative fitness band. It is still nice to be able to launch exercises directly from the band though.

Given that this is thing has a color screen, you get a few more customization options over the previous gen. Using the Mi Fit app, you can change the main clock face to one of approximately 77 options. I will say that most are utterly horrendous though, which is partly why I stuck with the basic ‘stock’ clockface that displays the time and how many steps I’ve taken throughout the day. 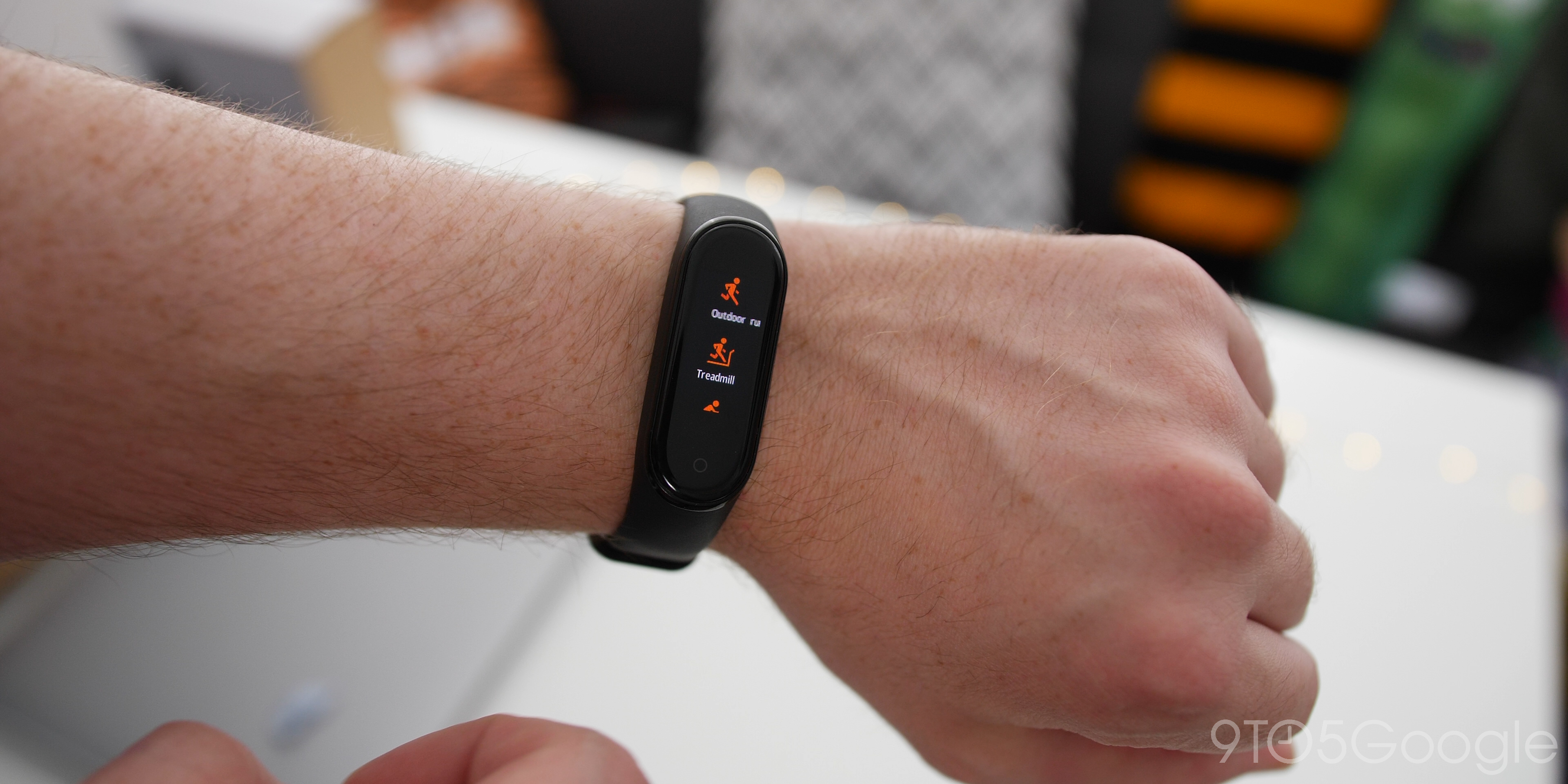 I am hoping that we will see some more customization options in the future but for now, the new watch faces are way better than the limited old monochrome alternatives on the Mi Band 3. Hopefully, if Xiaomi reads this they can up the selection soon.

There are sleep tracking features too, and it proves to be one of the areas where the Mi Band 4 really excels. Some of that is due to the size of the band, you’re more inclined to keep it on while sleeping than a big, bulky wristwatch. It tracks your light and deep sleep cycles and time awake, then it records it all and gives you a score from one to 100. You can even compare your scores against other Mi Band wearers. I’m not sure what it all means in the grand scheme of things but it is nice to be able to track your sleep patterns.

Other software extras include the ability to schedule screen on times and a night mode. These are great if you want to continue wearing your band while sleeping but don’t want to be disturbed or disturb the person you’re sharing a bed with by having a blazing 400 nit display at full brightness. 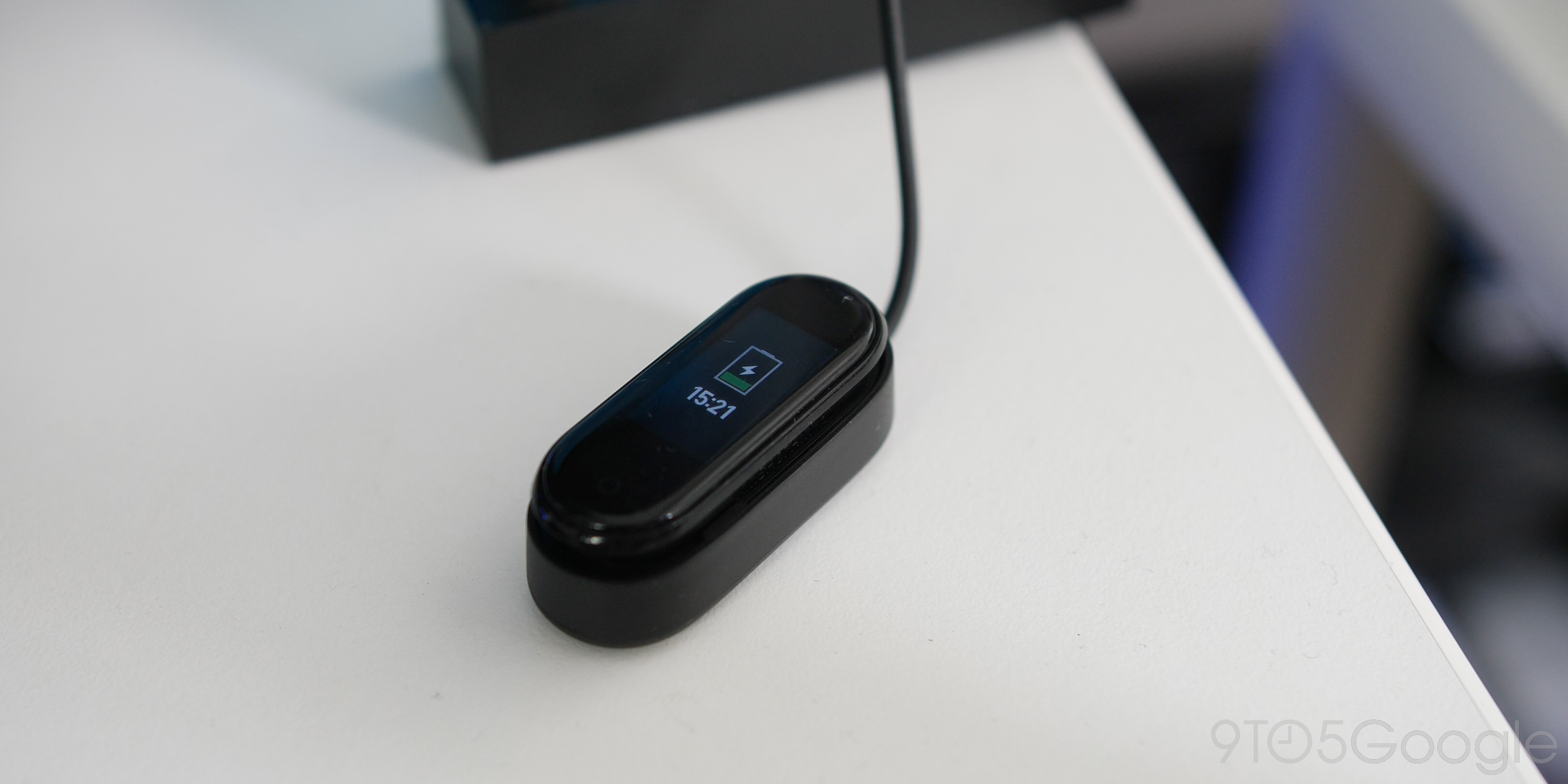 Having a color display may have you worrying about the battery life of the Mi Band 4, especially as the monochrome AMOLED on previous versions offered such substantial performance. You don’t need to worry about longevity with the Mi Band 4, as it still maintains a solid 15 to 20 days on a single full charge.

In my experience, after 15 days I still had around 15% battery left. That was with regular heart rate tracking and GPS usage while playing soccer for two hours per week and a 40-minute gym session three times per week. If you were worried about battery life, then you shouldn’t. The Mi Band 4 has excellent battery performance.

Charging takes around two hours for the Xiaomi Mi Band 4 to go from zero to 100%. The new cradle-style charger is so much better than the old two-pin slot that was finicky and frustrating in equal measure. You just have to unclip the ‘main body’ of the Mi Band and clip it into the cradle. It sits nice and securely and although the USB-A cable isn’t the longest, it is fine for charging via your PC or laptop USB ports.

Even with a slight price jump, the Xiaomi Mi Band 4 still manages to be the best smart fitness band on the market in my opinion. There are competitors from brands such as Honor, Fitbit, and Garmin that offer similar experiences but I feel they don’t quite match the Mi Band 4 because you don’t get any major additions for the sake of around $50.

All-day comfort is a big bonus for a fitness band, and this is easily the most comfortable option I have tried. I don’t normally like wearing a watch for long periods but it’s the exact opposite with the Mi Band 4. Not having to worry about charging is also another reason why I prefer a band or ‘tracker’ to an actual watch.

If you already have the Xiaomi Mi Band 3, I still think the color screen alone is enough of an upgrade but for the most part, there aren’t a ton of features that make it completely essential. That said, as a tech gift or intro into smart wearables, there are few options that offer this level of value and usefulness. You’d be a fool not to consider it.

Where can I buy the Xiaomi Mi Band 4?

The Xiaomi Mi Band 4 is available directly from Amazon for under $50. If you scour the web you can get slightly better deals from import sites like Gearbest at under $35. It’s also available for around the same price on eBay.