One of the most promising features spotted during the Android Q Beta that has yet to emerge following Android 10’s launch is customizing the AOD and lockscreen clock. It now appears that this Pixel personalization, along with others, could still be coming.

Towards the end of the Q Beta period, the Settings app offered a “Customize your Pixel” suggestion that teased the ability to “Try different styles, wallpapers, clocks, and more.” Tapping launches the existing Google Wallpapers app that lacks those other personalization options.

Surprisingly, this card offering Pixel customizations at the top of the Settings app persists in the public Android 10 release from Tuesday. While there are often many features that don’t make it into a final version, “Customize your Pixel” does not appear to be one of them.

“Styles” presumably refers to the current ability in Developer options to set one of eight Accent colors that are prominently applied in Quick Settings and other parts of Android. Also found in that menu are different headline and body fonts, as well as icon shapes. 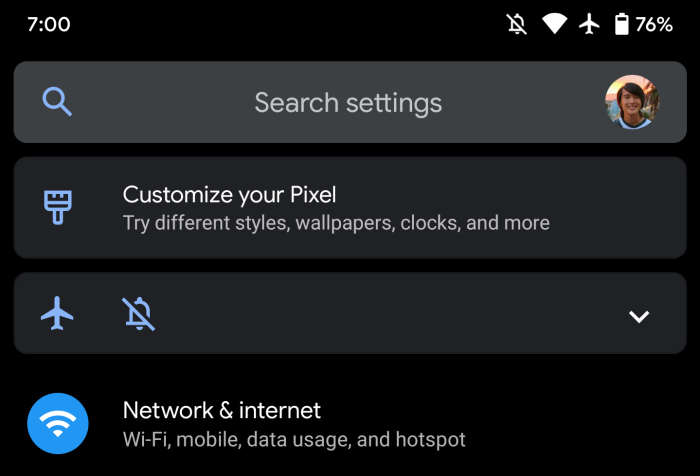 The clock customizations that we previously enabled include replacing the digital time with an analog version, as well as a text clock. It’s applied to both the homescreen and always-on display.

It would be smart for Google to bring together all these Pixel customizations onto one page, with XDA in April finding evidence of a “Pixel Themes” app that could be available via the Play Store. The most likely target for a launch is the Pixel 4 next month, but it could be brought to older devices, like the Pixel 2 and 3 where these “Customize your Pixel” suggestions appear.