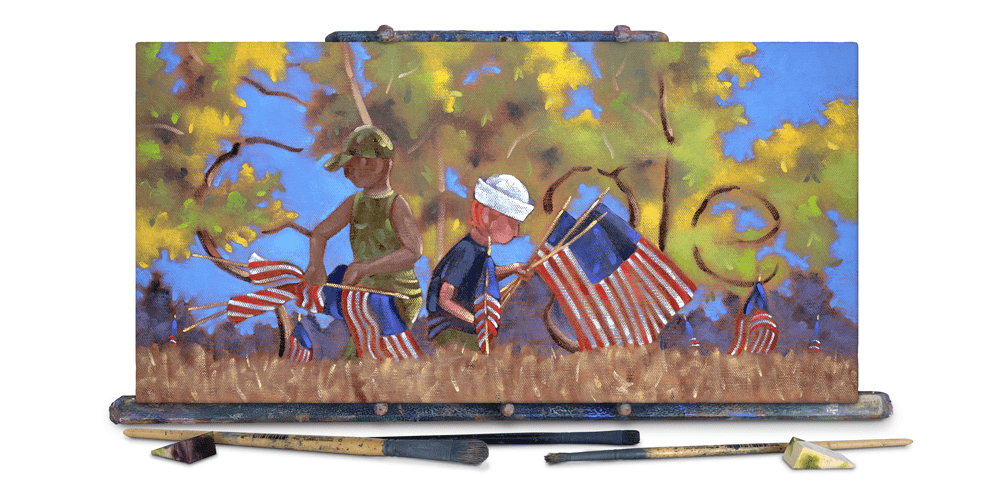 Today is Veterans Day in the United States, and Google is honoring all service members of the US military with a homepage Doodle drawn by a veteran.

Every year, for Veterans Day, Google devotes their homepage to a wonderful work of art that celebrates the military men and women who put their lives on the line for both the United States and its allies, and 2019 is no different.

This year, Google has chosen veteran Pete Damon to be the guest artist in charge of the Veterans Day 2019 Doodle. The Doodle is actually a beautiful painting, entitled “Paying Tribute,” depicting two children placing American flags in a field.

I’ve witnessed children taking part in similar displays of patriotism on Veterans Day when large fields, usually in public spaces, are filled with a sea of little flags. I thought it would make for the perfect painting subject. I asked permission from a friend and fellow veteran, Hillary Moll, who captured these scenes in photographs to use some of them as a reference.

Even more breathtaking than the Veterans Day painting itself though, is how it was created. Damon lost parts of both of his arms — and nearly his life — while serving our country, but has not let that stop him from becoming an artist. Google shared a behind the scenes look at Damon’s artistic process.

Two other concepts were also considered for the role of Veterans Day 2019 doodle, one featuring a young boy being reunited with his father, and another using common military mementos like dogtags to spell out “Google.”

Elsewhere in the world today, Poland is celebrating their independence day with a Google Doodle of their flag waving in the wind. Of course, this is no coincidence, as in the United States we use Veterans Day to commemorate the end of World War I, on November 11, 1918, which also resulted in Poland obtaining its freedom.