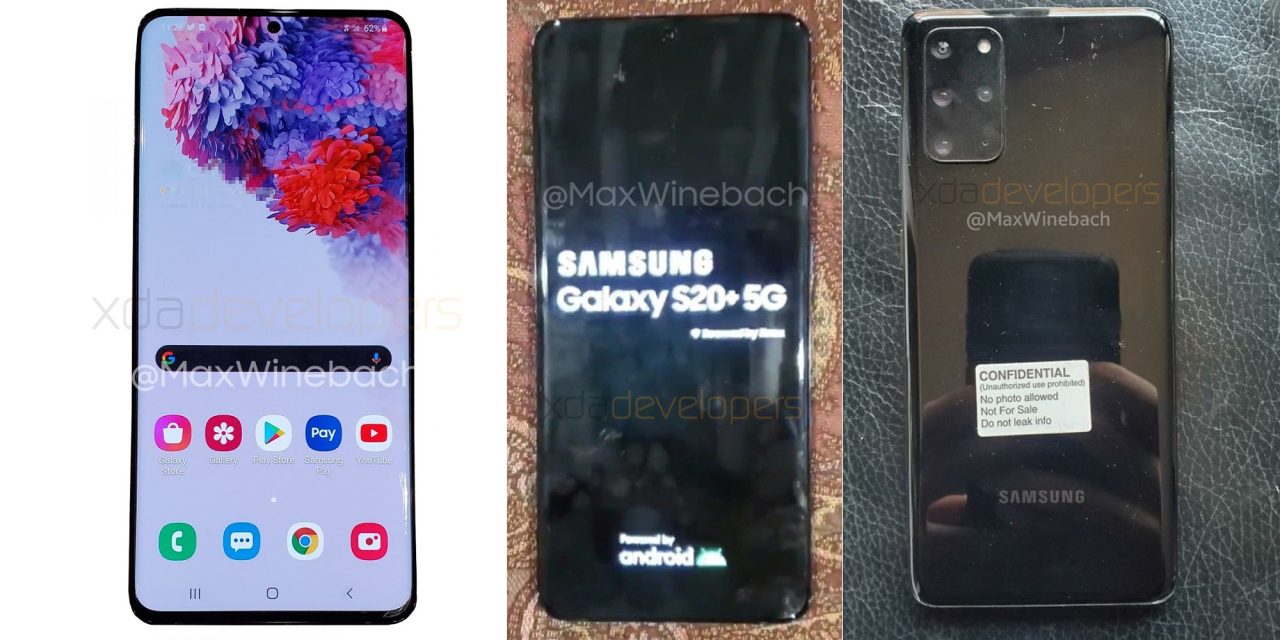 The first hands-on images of the upcoming Samsung Galaxy S20+ have leaked giving us a glimpse of the design we expected to see at the Unpacked launch event on February 11, 2020.

We have been given these first close-up glances of the upcoming flagship courtesy of XDA-Developers Samsung maestro Max Weinbach as we inch ever closer to the launch event. A trio of Samsung Galaxy S20 devices are expected, with this being the S20+ model that as per the splash loading screen appears to include 5G connectivity.

Previous CAD-based renders hinted at the rear domino camera array. Unlike the disorganised design first hinted at, the quad-camera setup has a more uniform and aligned layout.

The camera setup isn’t expected to have the highest end specs this time around. Instead, the “Galaxy S20 Ultra” will be the highest-end model but the S20+ is expected to include a brand new 12-megapixel 1.8μm main image sensor. We’ll also see an ultra-wide-angle and telephoto zoom lens.

The leaked Samsung Galaxy S20+ images appear to lack the dedicated Bixby button — which had been rumored for some time prior to these new leaks. The display retains the central punch-hole notch that was first tweaked on the Galaxy Note 10 lineup. However, the bezels appear to have shrunk yet again, with barely any forehead and chin of note.

XDA notes that Samsung has opted to use 2.5D glass rather than the usual curved glass on the Galaxy S20 line this time around. That means that the S20+ has less pronounced curves at either side of the display.

While these leaked hands-on images of the Samsung Galaxy S20+ don’t confirm the internals, the 5G splash screen does semi-confirm the inclusion of the Snapdragon 865 chipset — at least on the North American variant. It’s unclear if we’ll see the 5G version launching globally or not. Although, outside the US, the Galaxy S20 series is expected to come with Samsung’s own Exynos 990 chipset.

Let us know what you think of the upcoming Samsung Galaxy S20+ and these leaked images down in the comments section below.