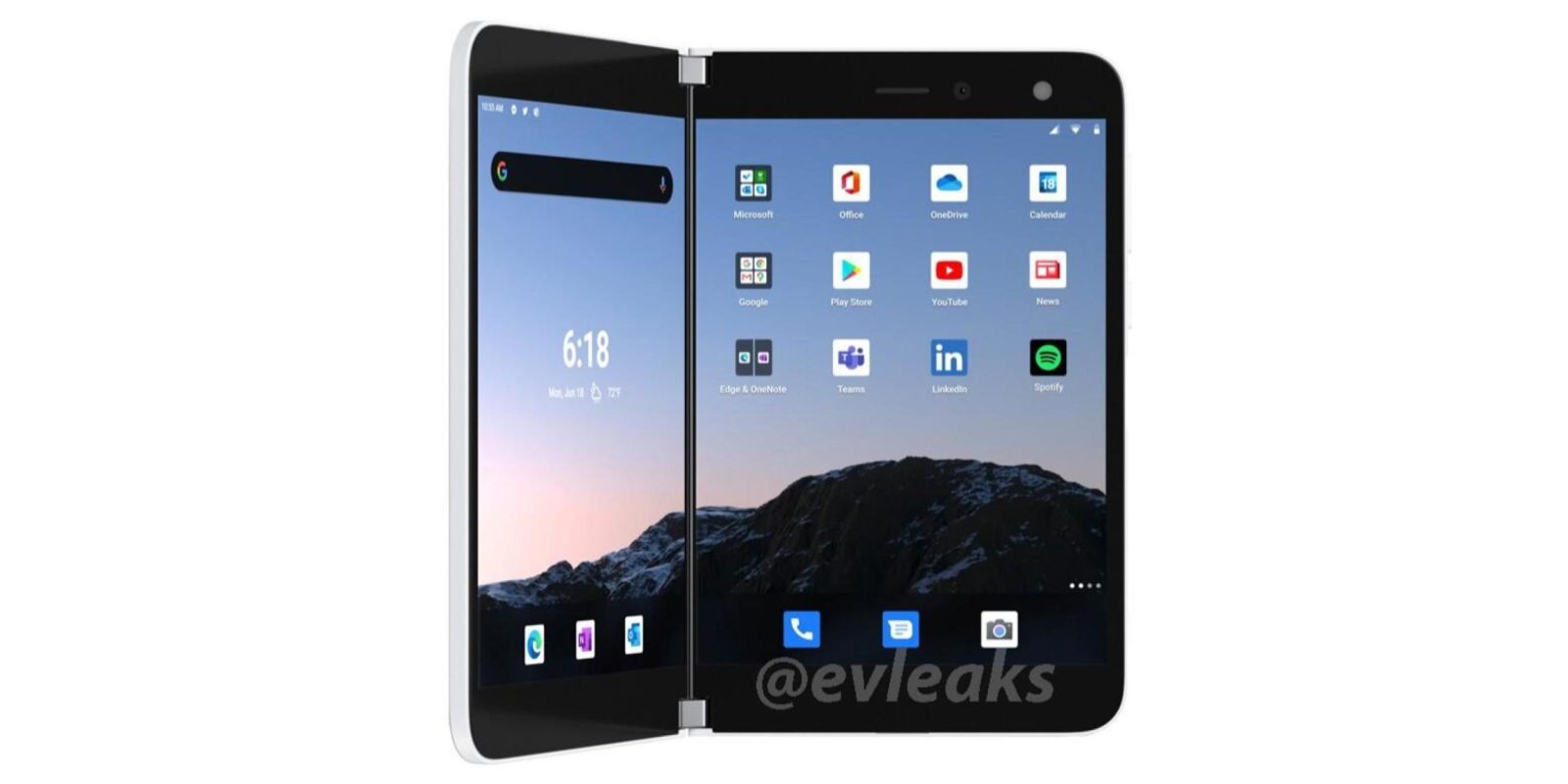 Microsoft’s Android Foldable is rumored to go on sale and start shipping as soon as this month. Official-looking renders have leaked today and show the final hardware design of the Surface Duo

Compared to the early units that Microsoft shared last October, the big difference in these renders from Evan Blass (@evleaks) is the inclusion of a flash in the top-right corner of the open Surface Duo. It’s identical to the real-world shots shared by various Microsoft employees in recent weeks.

The sequence of images shows the Duo closed and then open at various angles. On the left homescreen, we see the Google Search widget up top followed by a clock with date and weather. The dock shows Microsoft Edge, OneNote, and Outlook.

The dock on the opposite side is home to Google’s Phone and Messages app, as well as Camera. While it looks like Google Camera on the Pixel, the icon has been ever so slightly tweaked, down to the purplish lens. Homescreen apps include a folder dedicated to Microsoft, while other first-party ones are also present.

The required “Google” folder is present, with Play Store and YouTube directly on the homescreen. Spotify is the only third-party app, while there’s a shortcut to launch both Edge and OneNote simultaneously as allowed by the dual-screen configuration. It will presumably be possible for end-users to create such workflows.

Blass notes this is a leak of “Microsoft Surface Duo for AT&T.” That could be the carrier Microsoft is offering the Surface Duo on and the origin. Otherwise, there is no carrier branding in today’s images.

Previous specs leak suggests that the foldable — with its dual-5.6-inch screens — will be powered by a Snapdragon 855 with 6GB of RAM. Three storage configurations (64GB, 128GB, and 256GB) are rumored, while there’s a single 11MP camera that serves as the front and rear facer. The battery is supposed to be rated at 3,460mAh with USB-C charging.

Update 8/11: More press images have leaked showing the box contents (via @samsungbloat). Besides a USB-C to USB-C cable and charger, a white case with bump — presumably for grip — looks to be included in the packaging. We also see shots of the Surface Slim Pen compared to an open Duo. There’s also an image of Surface Buds in a new, non-silver “Glacier” color.