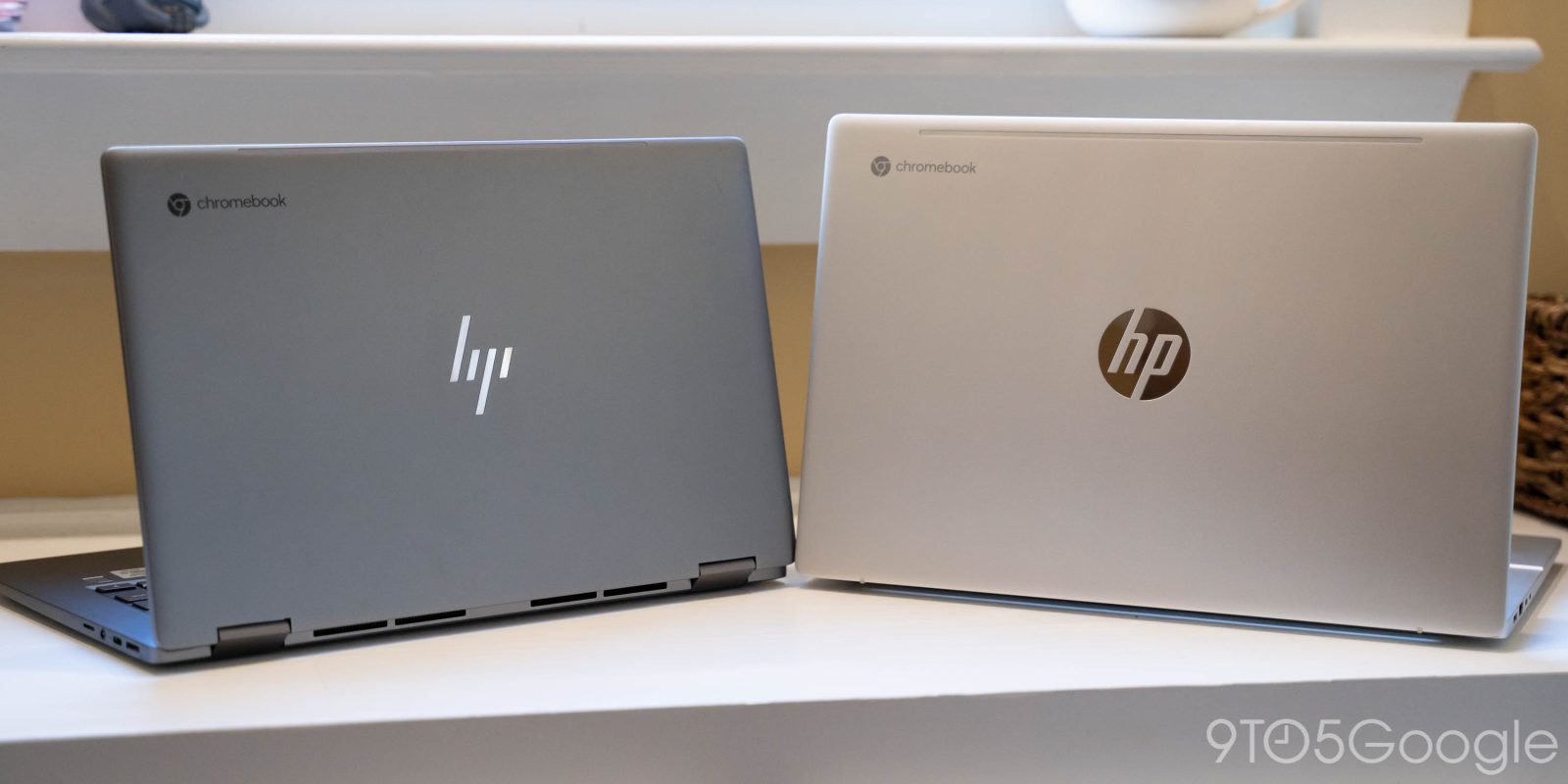 The first thing you probably think of with Google’s Chrome OS platform is a cheap laptop. That’s understandable — the platform has built its popularity on super-affordable laptops that don’t suck. However, there’s a whole other side to the Chrome OS coin. Premium Chromebooks offer the simplicity of Google’s platform with killer performance and premium features. Lately, I’ve been testing out two premium Chromebooks from HP — the HP x360 14c and the HP C640 Pro. Here’s why they’re some of the best “high-end” Chromebooks you can buy, and possibly better than Google’s Pixelbook Go.

Odds are you’ve used an HP machine or two in your life, and if you’ve tried any of the company’s premium laptops in the past several years, you’ll know the designs are well-built and sturdy. For these two Chromebooks, that remains true — they just take slightly different paths.

The HP x360 14c Chromebook delivers a polished design with a slick “gunmetal” color. It’s not absurdly thin, but it’s enough to comfortably fit in a backpack. By contrast, the C640 Pro is a slightly thicker machine with some raised “feet” underneath. The difference between the two is clear when you see them in person.

In both cases, though, you’re getting a well-designed laptop that’s capable of just about everything you require. They both also come with two USB-C ports — one on either side — which can both charge using the Power Delivery standard. The included chargers are plenty quick, but you can also use third-party options if you need a spare. The x360 continues its ports with a full-size USB port, a headphone/mic port, and a microSD card slot.

The C640 Pro, on the other hand, doubles up on full-size USB, has an HDMI port, a microSD slot, and a Kensington lock. That HDMI port especially should come in handy for the target demographic here.

There are a few key parts of the hardware I’m a fan of, too. Both laptops offer a fingerprint sensor. Chrome OS is still a bit annoying with biometrics, requiring a full password after a reboot or just at random points entirely, but the convenience of having a fingerprint sensor can’t be understated. I also found these sensors to be accurate and speedy.

Another nice touch? Hardware switches for webcam privacy. On the x360 there’s a physical switch on the left side of the machine that cuts off webcam access to any software on the device. It’s a nice peace of mind, especially given how often we’re using webcams nowadays. Further, the C640 Pro has a physical slider that literally covers over the webcam. Business users are sure to appreciate the extra level that goes to, but it’s important to note that it’s a little tough to tell when the slider is covering the camera as there’s no color to it. I wish HP had given the cover an orange tint like the switch on the x360, but either way, it gets the job done.

Perhaps one of my only negative points would be the speakers. HP advertises tuning by Bang & Olufsen, but the quality is just unimpressive. The C640 Pro often feels slightly tinny and empty. The x360 14c is a marked improvement with full-sounding audio, but it’s still not ideal. That’s a relatively minor point, though. The speakers are fine for videos or calls, but I’d rather connect to a proper speaker for listening to music.

Both the HP x360 14c and HP C640 Pro have 14-inch displays with relatively slim bezels, optional touch panels, and resolution that maxes out at 1080p. That resolution doesn’t bother me at all, and both panels looked very sharp despite the size. Brightness and color accuracy was also on point.

With the consumer-focused x360, there’s a 2-in-1 design here that allows the display to flip around completely. As a result, the screen has a glossy finish, which is comfortable for tablet mode. I still find the size unwieldy to use as a tablet, but if that’s your thing, HP certainly has you covered. That touchscreen also supports a USI stylus!

On the C640 Pro, the display is a bit different. It’s still a touchscreen (if you pick that option), but it doesn’t flip all the way around and has a matte coating. I love a good matte display for working without distracting reflections. The fact that it retains a touchscreen is a great touch, too, though I didn’t find myself using it much for the fear of smudges.

It’s a shame there’s no 4K option for these machines, but that’s usually overkill anyway. I think most people will be perfectly fine with the 1080p resolution and what these displays bring to the table.

HP’s Chromebooks traditionally have pretty good keyboards, and I’ve found that both the HP x360 14c and HP C640 Pro are no exceptions. The keys are well-spaced, have good travel, and offer backlighting on most configurations. These aren’t especially outstanding, but they get the job done, and they’re mostly a pleasure to type on.

Out of the two, though, I find the 14c has a bit of an edge. The keys feel a bit tighter, and as a result, they’re also a bit quieter. There’s also the point of backlighting. Since the C640’s keys are silver, the white backlighting makes it very hard to read the text. The 14c lacks that problem with its “Mineral Gray” finish.

As far as the trackpad goes, both machines are solid. This is a classic click mechanism, which means it’s super clicky at the bottom and not so much at the top, but it’s glass, so your finger slides easily over it. The only complaint I had was that on the x360 14c, the chassis had enough flex to “jam” the trackpad when it was rest on one leg of my lap or on the arm of a couch. The C640 Pro didn’t have this issue, though.

Both of these machines have 60 Wh power backs within which, in my use, translated to around a full day of use. My daily workflow typically includes a lot of web apps with the display at medium brightness, and I found that I could go from 100% to around 15% in around 8 hours depending on usage with the C640 Pro. The 14c could squeeze out a bit more life but usually died in a full day as well. Notably, though, my general usage on these machines was spread out over the course of two or three days, with standby power consumption being fairly minimal.

Your results may vary with the battery life on these laptops, but it’s far from what I’d call disappointing. You’ll get solid battery life on the whole here, plenty for a day working from home without worrying about a power cable, or travel — you know, when we can do that again.

As for charging, USB-C is on board with speeds up to 65W on the C640 Pro and 45W on the x360. In the case of the Pro model, HP advertises up to 90% recharge in just 90 minutes. I found the speeds completely adequate on both.

With a premium Chromebook also comes a premium spec sheet. The HP x360 14c is a relatively tame affair with an Intel Core i3 chip and 8GB of RAM. Meanwhile, the C640 Pro is fully customizable, with the model I test-drove running on top of a Core i7 chip and 16GB of RAM. These specs, though, aren’t really out of the ordinary. In fact, there are other machines that beat these both out by using speedy NVMe storage.

Putting it simply, they both perform wonderfully. The C640 Pro, obviously, was an absolute workhorse, but I also never felt limited by the 14c with its i3 chip. It still felt fast and it never lagged behind my workflow. That’s even with half a dozen tabs, Spotify, Slack, and other windows open all at once. Even Android apps performed admirably. The only noticeable difference I saw was with Slack. I usually keep two accounts open in the same window and on the 14c it tended to reload or freeze up when switching back and forth.

My first thought looking at both of these machines was that they both took on one very specific competitor — Google’s Pixelbook Go. The Pixelbook Go arrived in late 2019 for $649 and up. In our review, we were very happy with its hardware and performance, but HP really makes us question the value of Google’s machine.

Comparing apples to apples, there’s the HP x360 14c against the Pixelbook Go. On HP’s machine, you’re getting a much newer 10th Gen Intel processor paired with the same storage and RAM, but also with a slightly bigger screen that has slimmer bezels. Plus, there’s a fingerprint sensor and a privacy slider for the webcam. The C640 Pro, too, carries those same benefits, and it even offers more powerful chipsets for much less money. Granted, there’s no 4K option, but that feels like overkill anyway.

Honestly, I find it genuinely difficult to tell someone to buy a Pixelbook Go at this point knowing both of these machines cost the same as or less than Google’s machine. One of the only redeeming things about the Pixelbook is its super-slim design, something HP didn’t quite match. If you can live with a few more millimeters, though, either of these HP machines is a better choice. One area the Pixelbook Go really beats out HP is in the speaker department. I wouldn’t say HP is bad, but neither of these laptops match up with what Google offers.

WHICH SHOULD I BUY? |

Ok, so let’s talk about who these two Chromebooks are for. The answer is pretty simple, to be honest. If you’re a consumer who wants to buy a premium Chromebook to use around the house and on the go, get the x360 14c. It has better speakers, a better-looking design, and has that 2-in-1 design makes it handy at home. Plus, it’s more affordable and easier to buy.

Meanwhile, the HP C640 Pro is a killer machine for enterprise, for getting things done. Its design would take more of a beating. Its screen is better for bright lighting. It has a physical cover for the webcam to enhance your privacy. Importantly, too, it’s available through HP’s enterprise channels, meaning your IT department can get it pretty easily.

Most people reading this article are general consumers, and the good news is that you can buy both machines as a consumer. The HP x360 14c is available through Best Buy, just in a single configuration. Through HP’s website, the HP C640 Pro is also up for grabs and can be customized to your heart’s desire. The model I used in this review costs $1,150, but a ~$800 version with an i5 processor is what I’d personally recommend.