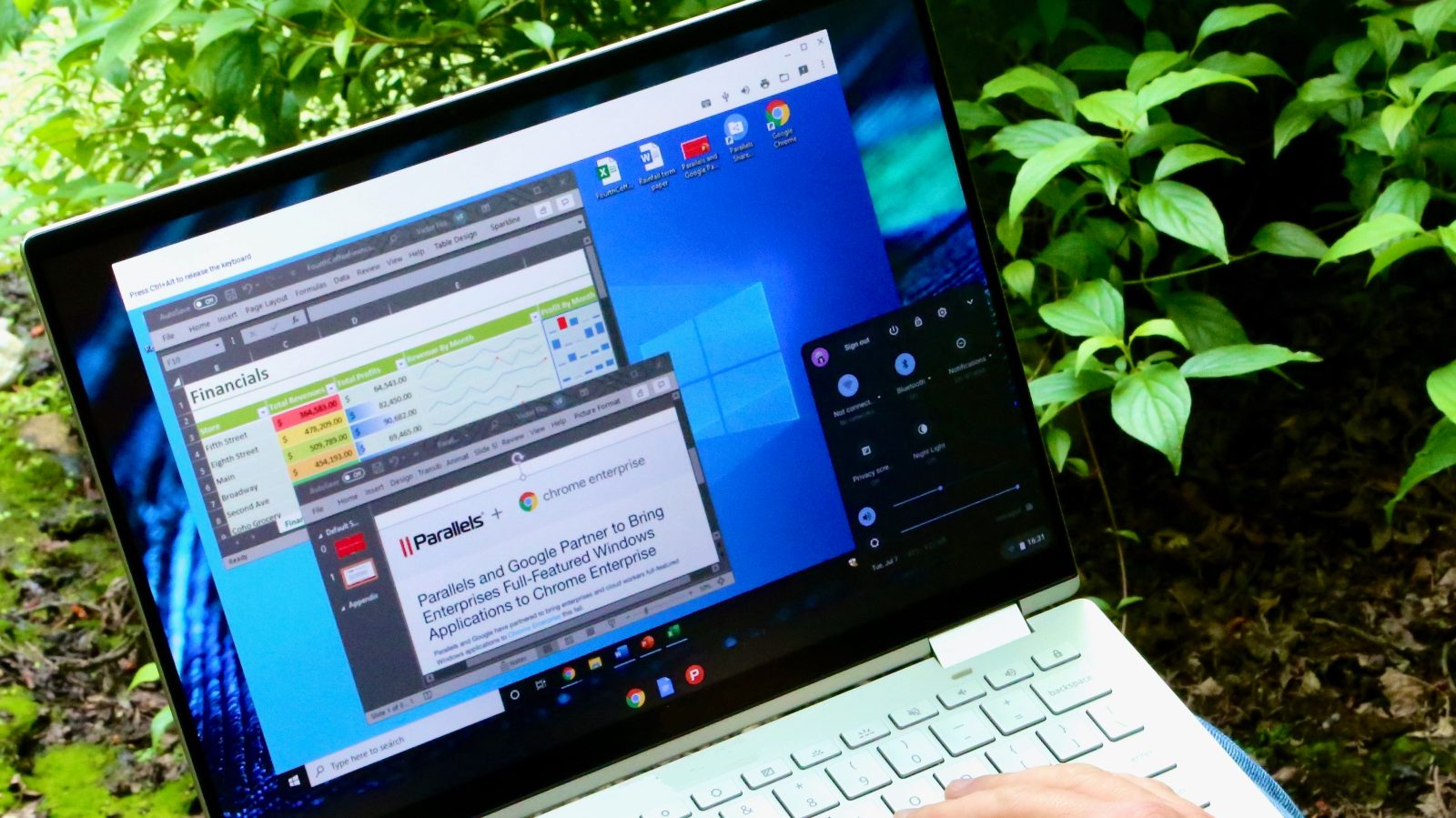 Back in June, Google announced that Windows apps are coming to Chrome OS through a third-party partnership — instead of an in-house solution. Parallels Desktop for Chromebook Enterprise is launching today to provide access to Windows apps that some businesses still need.

This virtual machine sees a full version of Windows installed on your Chrome OS device that works offline. Google created a secure sandbox for Windows that can easily be wiped if needed.

In the future, you might be able to just launch specific apps, but everything in this initial version happens in a literal window that has two rows of buttons with various controls. It can be resized, while full touch and keyboard input is supported. One nifty detail is how the cursor transforms depending on what OS you’re hovering over.

Alternatively, you can enter fullscreen mode to obscure the underlying operating system. This is particularly useful with the Virtual Desks feature on Chromebooks where you can four-finger swipe between entirely different experiences. Otherwise, the Windows 10 experience on Chromebooks is accessed from the Parallels Desktop icon in the bottom shelf, with the same state preserved on open/close.

The Parallels Desktop pitch today is entirely for enterprise customers that use Chromebooks. Some businesses still have custom, proprietary applications that are only available on Microsoft’s platform. Meanwhile, other apps are more feature-rich on Windows. For example: “chart trendlines in Excel, captions and citations in Word, and custom fonts or headers and footers in PowerPoint.”

Google and Parallels worked closely to implement this solution. As such, there’s a shared clipboard where text or images copied in Chrome OS can be pasted into Windows, and vice versa. Desktop, Documents, Downloads, and other Windows user folders appear in the Chrome Files app.

Meanwhile, you can have files — like .docx — automatically open in Windows as the default behavior, while you have the same ability to set where web links launch. Another integration is the ability for Windows to access printers in Chrome OS, as well as network connections.

Parallels integrates with the Google Admin Console. Administrators just specify where user devices can download the Windows image and can set the disk space needed, as well as what apps end users are allowed to install.

In terms of initial limitations, sound will play, but microphone input is “planned for a future update.” Also coming is camera and USB device support, while 3D graphics are not available for games or video editing. The recommended Chromebook hardware requirements needed to run Parallels and Windows apps are as follows:

Parallels Desktop for Chromebook Enterprise is available today for an annual $69.99 fee per user. As the name implies, it is only available for enterprise users and not personal usage.