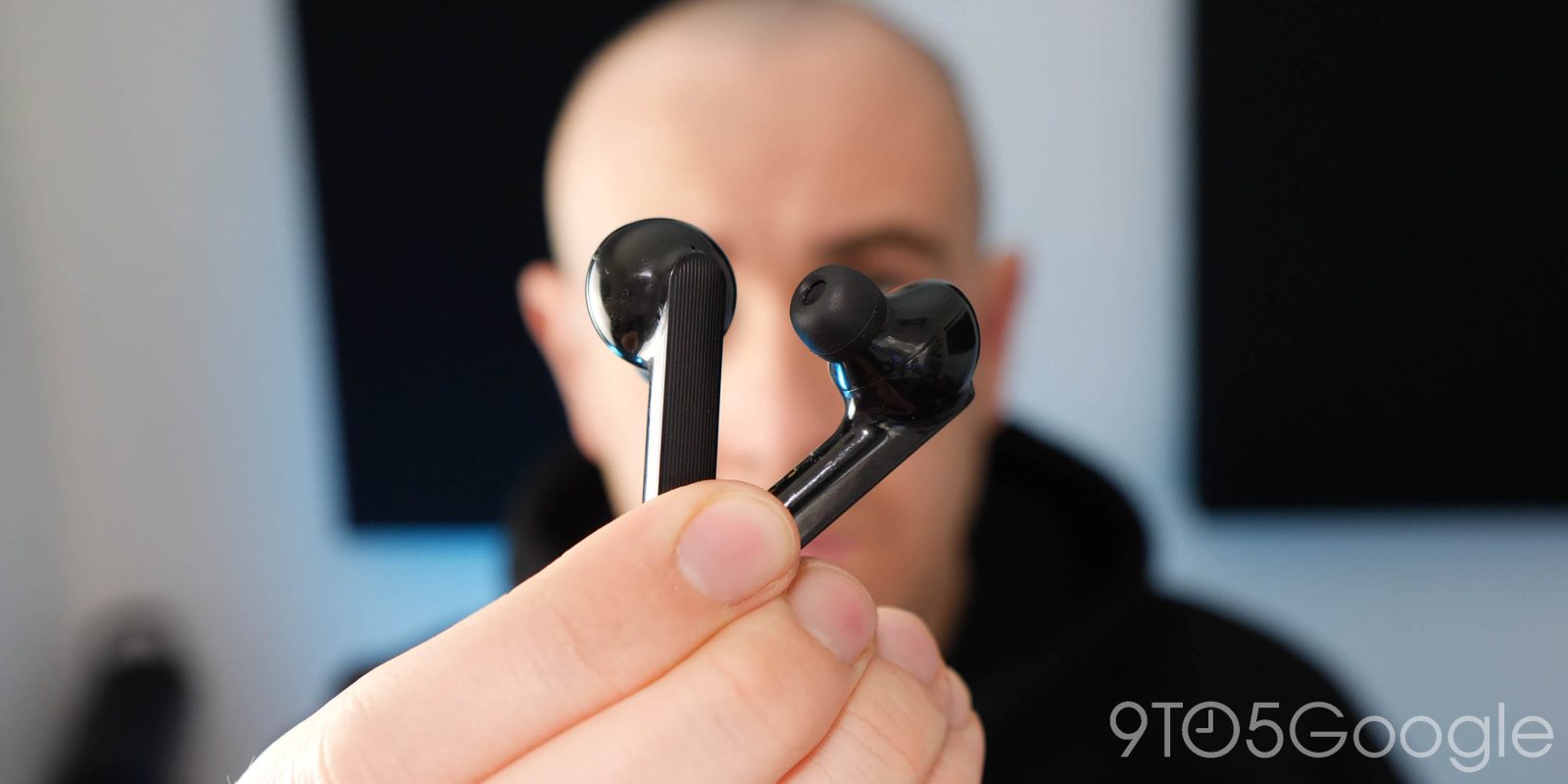 After striking gold with the TicWatch Pro 3, Mobvoi’s Earbuds Gesture wireless Bluetooth headphones have arrived after a successful Indiegogo campaign complete with some hands-free head gestures.

It’s easy to throw certain styles of Bluetooth earbuds into the “Apple clone” category. Mobvoi hasn’t been ashamed to take cues from the Cupertino firm, but there really is only so much differentiation you can make with a certain style of earbud.

The Mobvoi Earbuds Gesture design is, in essence, a refresh of the TicPods 2 Pro but with an added silicone tip for a superior fit and better sound isolation. We’ll talk about both of these things later on, but all you need to know is that the design is pretty generic, to say the least. On top of that, the aesthetic is one you’ll recognize if you have ever seen Mobvoi-branded earbuds previously.

It’s the traditional stem-and-bulb shape that Apple helped bring to the masses. There is no denying that this works, but I have come to love the smaller “dot” type design that the Galaxy Buds+ and Pixel Buds have used over the past 18 months. Of course, that is down to preference, but it also has an effect on the type of carrying case that your earbuds can adopt.

Each actual earbud is exactly the same as the original TicPods Free in terms of size, shape, and design. This is simply a recycled shell that has some slightly updated internals for early 2021. Is that a bad thing? I’m not so sure, as for many people the original style probably suits them just fine, and if it ain’t broke don’t fix it. Mobvoi has improved the thin plastic mesh underneath each earbud tip though. This portion is more recessed, meaning that gunk shouldn’t build up quite as much as on the original model.

Mobvoi has stuck with an elongated pill sarcophagus for the Earbuds Gesture — it too being the exact same as the original TicPods. And while I like the etched or ribbed style top plastic, it’s likely a much bigger case than many other options out there at this point in time. The USB-C charge port to the right side is one that I applaud, as it means opening the case while charging is not hindered by an attached cable. There is no lanyard attachment section though, which is probably for the best.

Opening the case, there is a nice rubberized internal lid covering that A) keeps the earbuds safe from scuffs and scratches and B) manages to add some stability when you’ve taken them out of your ears and placed in for charging/safekeeping.

There is a tiny rattle when shaking the case, but even though the lid does feel a little flimsy or light, it won’t budge. This was a concern to me at first, but the ridged design should withstand far more damage than many glossy earbud case lids. The case is not in any way water-resistant, but each earbud has an IPX5 water- and dust-resistance rating. Essentially it means that you’re safe to wear your Earbuds Gesture in the rain or at the gym, as they are rain- and sweatproof. They should also survive a brief water spillage.

When I first tried the original TicPods, I liked the inclusion of a silicone tip for secure ear fit. The return to this style means that when secured with an earbud tip suited to your ear, it should be more stable. Naturally, the added stem really helps aide that, but it is noticeable when dangling down.

I stuck with the original silicone tips that come pre-applied to the Mobvoi Earbuds Gesture and found the isolation pretty good overall. You do get a few extras in the box, which is always appreciated. A little bit of excess head movement does make them move when seated, but general moving around — walking or some light jogging — won’t dislodge the earbuds from your ears without vigorously swinging your head around.

This is kind of important when the main selling point of the Mobvoi Earbuds Gesture is the hands-free call controls that have you shaking or nodding your head to reject or accept a call respectively. I can’t speak for everyone simply due to all of our various ear shape differences, but I think these buds are “generic” enough to be a good fit for the majority of people out there.

At just 5g per earbud, you likely won’t notice they are there for long periods. That said, I would often remove each earbud after a little while, as wearing earbuds all day does get tiring. This is not a negative, as ear fatigue is something I think almost all earbuds cause after a few hours.

While that might initially sound scathing, the actual audio experience on the Earbuds Gesture is not terrible by any stretch of the imagination. In fact, I’d say given the pricing and the 6mm drivers, the sound is pretty darn good.

Yes, track separation isn’t particularly great, but I like the fact that bass is not overpowering. The soundstage is far more open than I thought it would be. Tracks like Tame Impala’s “Let it Happen” have enough breathing room and reasonably solid instrumental separation without the thick drum beat drowning out the intricacies of other sections.

If you are hoping for thick, deep bass, then you simply won’t get it here. Seminal dubstep track “Midnight Request Line” is always a benchmark of this, with the crisp baseline being punctuated by snaps and cracks. Unfortunately, the Earbuds Gesture simply can’t hold the baseline to any great level, making the track feel inhibited and closed.

This is likely harsh on a pair of earbuds that are a “jack of all trades and master of none,” but I doubt the general listener would care — and rightly so. One big bonus is that thanks to the earbud tip seal and isolation, even without ANC you can drown out background noise from moderate volume levels. Get above 45% to 50% volume and everything is drowned out to a large degree.

One minor downside you may notice is a very low-level audible static when first connecting to the Mobvoi Earbuds Gesture. This sounds like TV static at a very low volume but will instantly disappear when you begin playing audio or video. There is no visible delay or noticeable audio latency when playing YouTube videos, nor when streaming videogames using services like Google Stadia.

Call quality is good. The microphone is good at blocking out some noise with the dual cancellation mode, but I think the biggest bonus is the positioning close to your mouth. I could hear the few people I called using the earbuds clearly without needing to max out the volume.

Of course, the core selling point that Mobvoi has doubled-down on is the “AI Gestures” with these earbuds. In reality, I’m not sure where the AI is being introduced, but you can nod or shake your head to accept and reject calls. It’s a big gimmick, but it has worked for me 100% of the times I tested it. Now that is something that many other weird and wonderful hands-free features can’t claim — Soli being a prime example on Pixel 4.

The controls are pretty standard, but the lack of a volume control swipe or tap was one control method I really missed. You’ll have to activate the Google Assistant and ask to increase/decrease the volume most of the time. Each tap gesture is fairly accurate, and the activation area on each earbud is pretty good overall, but the dedicated Mobvoi app is simply a waste of time.

The only purpose of the stand-alone Mobvoi app is to disable the head-nodding feature or act as a quick reference page for the Earbuds Gesture tap controls. There are no ways to tweak the audio using an equalizer or even apply some presets. To say I was disappointed would be harsh, but it would be nice to be able to tweak the audio experience.

All-day and then some.

Rating the battery at 50 hours is a big, bold claim, but it isn’t too far off that headline figure. Each earbud is rated for around nine hours on a single full charge. I have only managed to get close to nine hours once when listening to podcasts at around 60% volume for a full working day. I had a low battery warning just as the eight-hour mark was passed, which is still very impressive.

I think given that each earbud has a 90mAh capacity, that is probably as good as it gets for buds of this type. Sure, there will be outliers, but the life span is one of the standouts of the Mobvoi Earbuds Gesture package. Each earbud can take a further three and a half full charges from the 600mAh carry case, which gave you around 35-40 hours of listening in my own testing.

That isn’t a bad life span, but you might be able to push it further with different listening habits. It takes just over two hours with the included USB-C cable to get the case and buds back up to 100% from empty too. Which is a bit slow especially when compared to some of the similarly priced competition.

The Mobvoi Earbuds Gesture are reasonably solid Bluetooth earbuds with a bit of a gimmick that, although works well, doesn’t mean you should pick them over an alternative pair. The battery bragging of 50 hours doesn’t quite live up to Mobvoi’s claims in real-world conditions, but the life span is highly commendable — and among the best of any earbuds that we have tested.

A direct competitor would likely be the OnePlus Buds Z, which I personally find more comfortable and to have marginally better overall sound quality. That said, the Earbuds Gesture are a decent buy if you want some long-lasting Bluetooth earbuds that are fairly lightweight, comfortable, and sound fairly solid.

Where can I get the Mobvoi Earbuds Gesture?

After initially launching on IndieGogo — which is honestly a little bit of a shady move for an established brand — backers are still currently receiving their products. However, the earbuds are already available to purchase from Amazon or Mobvoi direct on sale at $69.99 with a pre-applied coupon. That makes these earbuds far more palatable and “worth a punt” in our opinion.