Pixel 6 and 6 Pro explained: Just what can we expect? [Video] 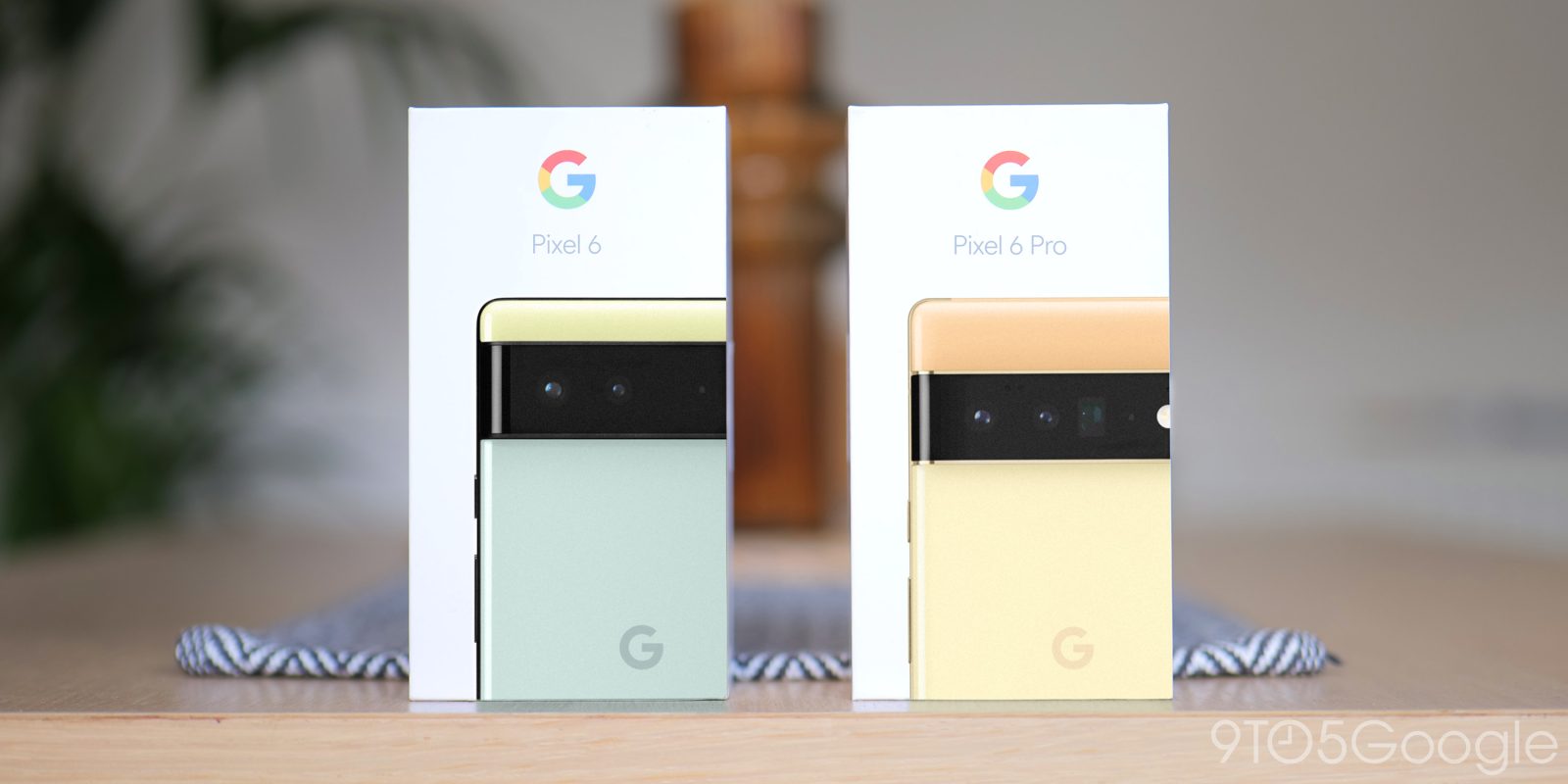 Google decided that we didn’t know enough about the Pixel 6 and 6 Pro, and so we saw a soft reveal of the upcoming flagship duo ahead of a “full” launch later this year. It has us thinking about all the connotations and combinations that these devices are bringing and what portions of the Pixel 6 need to be explained.

Some of this information has been rumored already, but it’s important to note that much of it has now been officially confirmed by Google. This, therefore, gives a much clearer picture of the late-2021 Pixel lineup, and so it’s time to dial up the hype ahead of the official launch presentation…

After Google teased new Pixel devices, we actually expected to learn more about the Pixel 5a 5G and maybe get a brief glimpse at the upcoming Pixel 6 and 6 Pro. What actually happened was effectively a soft launch, while many of the new upgrades and improvements coming with the Pixel 6 series were explained in a dedicated blog post.

We already knew that we’d see at least two devices: the Pixel 6 and Pixel 6 Pro. It was nice to get confirmation of a name for the larger of the new duo, but we’re sure that some people would really have preferred “XL” to “Pro” at least for parity with previous iterations.

Let’s explain the core hardware chassis differences because much of the internals are practically identical. The smaller Pixel 6 measures 6.4 inches, comes with an FHD+ 90Hz display complete with an under-display fingerprint scanner replacing the Pixel Imprint capacitive reader that was reintroduced on the Pixel 5. It’ll come in three colors, reddish, greenish, and gray/black. One throwback Pixel 4 design choice is that os matte black side rails, but Google is dropping the colorful power button — which is a little sad.

Google is supercharging the Pixel 6 Pro with a 6.67-inch QHD+ curved 120Hz display with an under-display fingerprint scanner. The colors are more muted and available in gray/black, champagne gold, and white/light gray. Unlike the Pixel 6, the Pro models all come with color-specific trims and frames for a more “premium” aesthetic.

No actual battery sizes were confirmed, nor did we get any official information on the charging speeds and methods. That said, Rick Osterloh did state that the battery life target is “all day.”

A major sore point of the Pixel 5 is being addressed and “fixed” with the re-introduction of a proper earpiece speaker. This is undoubtedly going to be music to the ears of Pixel 5 owners that might be looking to upgrade to this new series. This should help improve the audio experience on both the Pixel 6 and 6 Pro over the Pixel 5.

The hardware looks to be fairly standard for a flagship for late 2021. With Google’s co-developed Tensor chipset we are looking at an out-and-out top tier device that looks as though it will compete directly with the best in the business come launch.

Qualcomm is being left in favor of internally developed – read: with the help of Samsung – silicon, which is a huge deal even despite the fact that Made by Google devices hold a mere 0.7% of the US smartphone market. Only Apple sells smartphones in North America with their own internally developed chips, Google is clearly following Cupertino’s playbook and it could pay dividends.

Confusingly, Google has previously used the “Tensor” name to refer to its machine learning hardware, such as the “Tensor Processing Unit,” which is used both in Google Cloud and as part of the Pixel 4 series’ Neural Core.

Some of you may know that the Neural Core was able to massively speed up image processing allowing for things like the “Live HDR” as well as speech recognition features that powered the next-generation Google Assistant on those devices. However, the Neural Core was dumped from the Pixel 5, a decision that was only compounded with the usage of a mid-range 5G-capable chipset.

With the Tensor chip, AI and machine learning are looking to be a major component of the system-on-a-chip for even greater processing of things like images and speech. Google is claiming that the Pixel 6 series is capable of real-time translation and can even apply HDR effects to each individual frame of video.

We don’t know for certain — because there has been no official confirmation at this stage — but reports suggest that the Tensor chip will be made using a 5nm fabrication process. This is the same manufacturing process used on the flagship Qualcomm Snapdragon 888/888+ chips plus Samsung’s own Exynos 1080 and 2100 chips.

Privacy is said to be at the very core of this chip too. The new Titan M2 chip is an upgraded version of the Titan M chip and touts the “most layers of hardware security in any phone.” It’s not clear how that is going to be backed up, but we’ll just have to wait and see come launch.

Google’s Rick Osterloh has also teased further augmented reality features for the Tensor chip. While wearables have been a very limited and rocky market for Google thus far, Osterloh hints that the new chip could provide the “perfect foundation for making big improvements in AR.”

This could simply mean improvements to the suite of AR features such as Maps Live View or better object recognition in Google Lens. It will be interesting to see just what developments occur though during the lifespan of the Tensor chip.

With news of this new chip being at the very core of the Pixel 6 and 6 Pro, Qualcomm stock saw a minor dip while the firm reiterated that it will “continue to work with Google” on current and “future” products. This could simply be referring to the upcoming Pixel 5a 5G.

It’s almost strange to say that a Pixel camera setup might be in need of some attention, but the old Sony IMX363 sensor is starting to get a little long in the tooth. No word from Google on a new sensor, but we did get some confirmation of camera specifications. The downside? If you’re a smartphone photographer, then the Pixel 6 Pro will be where you want to focus your attention.

The Nexus 6P-like visor breaks away from the upper-left convention that the Pixel series has adopted since its inception, but this does bring some notable improvements. Let’s start with the Pixel 6, as while the layout has changed it will come with familiar focal lengths. Google confirmed that the smaller device will include a main wide and ultra-wide-angle lens with accompanying LED flash.

As we mention, if you care about mobile photography, the Pixel 6 Pro is where most of your attention will be likely be focused. It will come with a main wide, ultra-wide-angle lens and a 4X telephoto zoom lens — for the first time on a Pixel series handset. Again, no sensor sizes were mentioned, but this is said to be able to capture up to “150% more light” than previous device camera setups.

Video is an area where we could see the biggest gains for the Pixel series this year. We could see some impressive Night Sight video modes courtesy of the improved camera sensor, but the touted live frame-by-frame HDR features could provide impressive opportunities to teak and tune beyond what we are currently able.

There is no doubt that Google is set to come out swinging with the Pixel 6 and 6 Pro camera setups, and we’re excited to see what may come at launch.

All of the hardware is tied up neatly with the huge Material You redesign that is coming with Android 12 and will be pre-installed on Pixel 6 series handsets. We’ve already done a ton of deep dives into each of the Android 12 Beta builds, but we’re sure that Google will save a few exclusive features for the upcoming flagship duo.

Some of these features will likely rely on the internals, while some will undoubtedly drip-feed down to older Pixels — as we’ve seen in the past. Given that the Tensor chip is capable of various AR and real-time translation tasks, we’d expect to see improvements to some of the core areas such as Live Captions and the Google Recorder app among others.

We’re sure that by the time the stable Android 12 update drops, we’ll have a better idea of just what else might be ready for primetime with regards to the Pixel 6 and 6 Pro.

No firm release date was shared, but it’s fairly safe to assume a familiar launch period for Pixel 6 series given that the Google Store lists “fall” and “autumn” as the time period in which more information will be shared.

Google is committing to the biggest ever marketing push for a Pixel smartphone this year, but while that might sound like a big deal, the Pixel 6 and 6 Pro have only been confirmed as launching in eight countries at this stage. Fans in Australia, Canada, France, Germany, Japan, Taiwan, the UK, and the US will be able to get the device upon launch. No wider availability details were shared, but Google is almost outright confirming that these are “key” markets for the Pixel 6.

The only pricing information we have is from Osterloh who admitted that “it will certainly be a premium-priced product.” Given that many other Android flagship devices fetch north of $1,000 or £1,000, it would be safe to assume that this is a fairly good yardstick for the price of the Pixel 6 Pro. We’d hope that the standard Pixel 6 will come in under four figures, but no pricing details have been confirmed by Google.

What are your hopes for the Pixel 6 and 6 Pro?

We’ve seen the design, heard a little bit about the new chipset and camera hardware and even know a little about the software. With that in mind, what are your initial thoughts and hopes for the upcoming duo? Let us know what you think of the Pixel 6 and 6 Pro down in the comments section below.