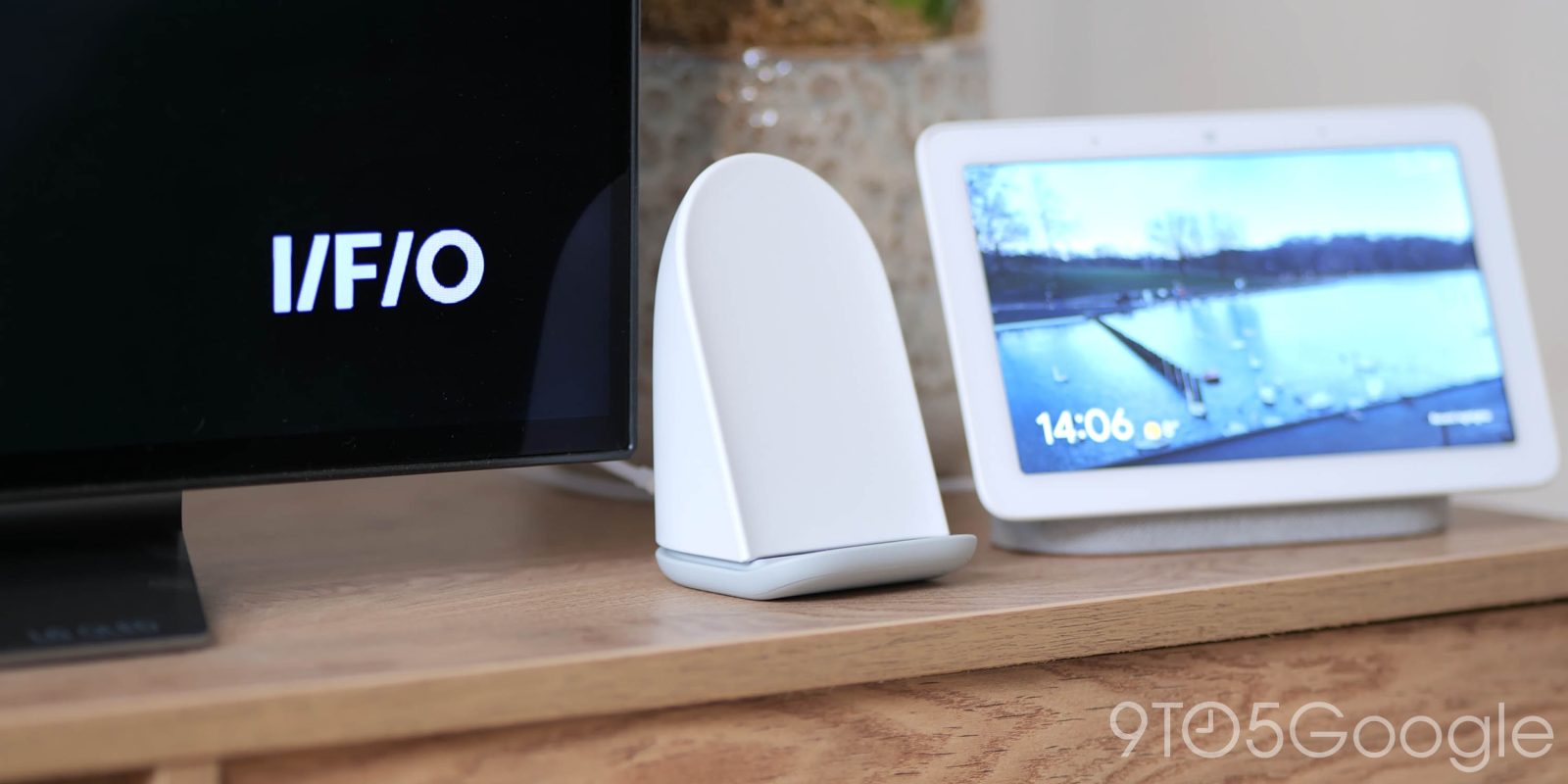 Alongside the Pixel 6 series, Google unveiled an updated wireless charger designed for use with the latest smartphone series. A delayed launch meant that the Pixel Stand 2nd Gen was not available until a month after the release of the Pixel 6 and 6 Pro.

We still don’t know the reason for the delayed launch, but it’s important to note as there are some gripes that at least until the delayed January update comes, will be left unresolved for many Pixel owners out there with the charger.

The biggest compliment I can pay to the Pixel Stand 2nd Gen is that it feels more like a Nest product than any other Google Pixel accessory. While a charger should always focus on utility first, it doesn’t mean that design should be an afterthought. It reminds me substantially of the Nest Wi-Fi router, and it similarly blends into your home decor surroundings rather than standing out and screaming “tech product”. Pastel green and the chalk-white is a muted color scheme, but one that I found really suits and pairs with the Pixel 6 in Sorta Seafoam and the Pixel 5 in Sorta Sage perfectly.

It has a soft-touch rubberized texture that somehow feels premium, while the curved shape has some added utility that you might not initially notice. With curved shoulders and a rounded rump, the Pixel Stand is perfect for resting your hand and almost “pinning” your smartphone while using your thumb to interact with the display. I like to think of this akin to “hugging” my Pixel 6 but it has been a surprising but lovely interaction method that while seemingly unintentional just feels natural.

Now this poses its own problem, as the cream or chalk color picks up grease and dirt from your hands over time – but so long as you wipe it down regularly, it shouldn’t build up too much. I actually found that dust builds up faster on the Pixel Stand 2nd Gen. This could be a combination of static and the texture or just that you’re interacting with the stand itself quite a bit.

The rubberized texture does mean that the Pixel Stand doesn’t slip or slide around even on smooth surfaces. It feels solid and stable even before you place your phone on the angled plinth – this is angled upwards from the base with a soft curve. You can rock the Pixel Stand forwards with excessive force, but the weight of a smartphone or pair of earbuds won’t cause it to topple over.

Slap your smartphone onto the Pixel Stand, and it too is stable and safe as the texture effectively grips your phone in place. You’ll notice a small vent and slight concave section as this is to allow airflow from the internal fan. I tried to rattle the charger to see if I could hear the fans inside when not powered on, but it’s a sturdy and well-made hunk of plastic.

When you do have a phone placed on this wireless charger, it is positioned at almost the perfect angle so that when at a desk, you can see everything without having to adjust your seating position. When compared to the OnePlus Warp Wireless charger, I have found this angle to be ever-so-slightly more pleasing as your phone is marginally more upright.

One of the biggest bonuses is that the Pixel Stand 2nd Gen comes as three independent components. There’s the Pixel Stand itself, a 1.5-meter USB-C to USB-C cable, and the same 30W rated power brick that can be bought separately for your Pixel 6 smartphone. Costing the $79 package out individually, the cable costs around $20, the charger $25. That leaves the Pixel Stand sitting around the $34 mark, which isn’t all that drastic for a first-party accessory that adds a number of neat functions and features alongside working as a charger. It’s important to note that you can get the wired fast charger with a cable for $35, which skews this price breakdown a little.

You don’t buy a $79 wireless charger without expecting a little more than just fast top-up speeds. Luckily, the Pixel Stand 2nd Gen is loaded with extras that you simply won’t be able to obtain or utilize on third-party alternatives. Naturally, Google Pixel owners get the best deal here as your phone is able to transform into something akin to a mini Nest Hub smart display — but with all smartphone features intact.

One massive frustration for anyone with a brand new Pixel 6 or 6 Pro is that unless you have sideloaded the recently pulled December 2021 update, then you will not be able to use the Pixel Stand 2nd Gen to its full potential. Not only that, if you don’t complete the on-screen setup procedure, charging appears to be limited at a lower rate than the full throughput at 21W for the Pixel 6 and 23W for the Pixel 6 Pro.

At least at the time of this review being published, this means that only a select volume of Pixel 6 series owners can even take advantage of the brand new Pixel Stand. It’s as frustrating as it is confusing, but while you might temporarily be unable to access some new features your phone will still charge. On Pixel 3 through to the Pixel 5 you can’t charge at these faster rates, but you’ll be able to get access to the new features.

If you have updated — or the January 2021 patch has arrived — the Pixel Stand app will launch into a setup process with the ability to link your Google Photos account, smart home, and Assistant controls. This is where the vast majority of people should make their decision on whether the Pixel Stand 2nd Gen is worth picking up.

Those with no Assistant-powered smart home tech or accessories will miss out on some core functionality. Google calls this “Quick controls”, and it’s just a way to quickly access a small shortlist of up to four devices when you activate the display. You can add thermostats, lights and all kinds of devices here too including (in my case) robot vacuum cleaners.

When you activate the display while your Pixel is on the wireless charger, you’ll also get access to media controls, which is especially useful. You can also quickly toggle the charging speed and enable a dedicated Bedtime mode quiet mode.

These options are only available when you activate the display with a single tap. Personally, I have really enjoyed the “Photo frame” feature that is also present on the original Pixel Stand. A swipe right just activates this slideshow mode, and it’s an added bonus that provides a little more utility than a Smart Display alone.

I haven’t personally used the Sunrise Alarm feature that gradually lights up your screen up to 15 minutes before your alarm is due to go off — for a very important reason — but it’s present. Adaptive charging also seems to work just fine here too for anyone worrying, if the Pixel Stand 2nd Gen affected the smart charging method.

While I do not have the Pixel Stand 1st Gen, I am aware that the charge speeds are a marked improvement here on the 2nd Gen. You’ll cut charging times in half with the newer model, plus it works better with a number of other Made by Google products including the Pixel Buds from 2020.

There are three modes to choose from here that you can switch to at any time — all of which affect the in-built cooling fan. “Optimized” will adjust charge and fan speed based upon your device usage. “Max” simply charges your Pixel as fast as possible and pumps up the fans to the highest speed. “Quiet” is the slowest charging method and lowers the fan speed so that you cannot hear them spinning.

I found that the on-screen charging time indicators were fairly accurate, but not always. For instance, on my Pixel 6, it would quote longer charge times than it took to hit the 100% battery percentage level. But it took around two hours and ten minutes to go from under 10% to 100% when using the “Max” charging speed. I tend to charge little and often rather than from zero to full, so I leave the Pixel Stand in the default “Optimized” setting, and just grab a little extra juice when I need it throughout the course of a day.

And that leads me to my biggest outright gripe with the new Pixel Stand. The addition of a fan. On the one hand, it’s necessary to prevent your Pixel from overheating. But on the other hand, it’s very loud and instantly noticeable in quiet environments. I had the same problems with the OnePlus Wireless Warp charger, which also has loud, rattling fans when in full flow.

My other concern is that I’m unsure if the fan actively cools a phone enough to even make a difference. Any cooling is bound to be better than no cooling, as the heat will undoubtedly degrade your smartphone battery faster (that doesn’t mean I’m not personally concerned about just how this will affect the longevity of my own Pixel 6 device). Your phone will still feel warm to the touch after an extended period on the Pixel Stand 2nd Gen, even with the fans at the maximum setting.

What’s interesting to note here is that fans will work with non-Pixel phones, too, but you won’t be able to adjust the settings. You’ll hear the fans kick in and wind down as the charging speeds cap out at 15W. That does make this a neat accessory for multiple devices alongside a Pixel.

The Pixel Stand 2nd Gen is not a killer accessory. It is a good charger with a simple and muted design that works nicely with compatible Made by Google smartphones. If you can deal with loud fans, it is the perfect companion for a brand new Pixel 6 or 6 Pro. Those of you out there with the original model might not want to upgrade here as the differences are fairly minimal, unless you simply must have the new Pixel Stand hub.

To me, the Pixel Stand 2nd Gen is the ideal alternative to a Nest Hub in the right environment. For most people, it probably isn’t the best bedside companion, because the fan noise even with dedicated quiet modes could be considered too loud when you’re trying to rest. As a desk accessory, the new Pixel Stand is a compelling product.

Factor in pricing is not too drastic as it’s a modular system, and it’s hard to deny that you should opt for the new wireless charger over the solo fast charge brick — but only if you own a Pixel. For anyone else baulking at the idea of paying $79 for a charger, then you might want to look to an affordable 10W Anker 313 wireless charger stand priced at under $20 or the more attractive and faster 15W Belkin BoostCharge priced at $40.