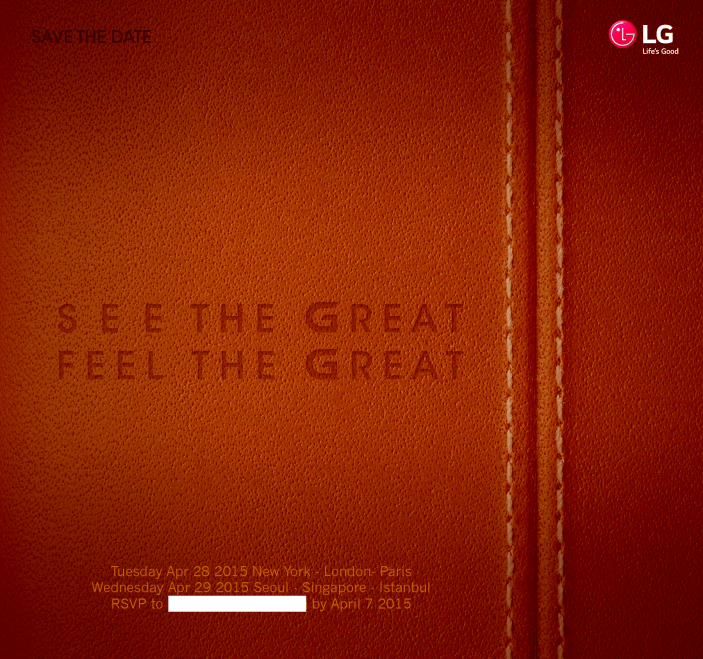 LG this evening has sent invites to events being held simultaneously on April 28th and April 29th in New York, London, Paris, Seoul, Singapore, and Istanbul. At these events, LG will most likely launch its next flagship smartphone, anticipated to be the G4. The invite itself is relatively minimalist, with the tagline reading, “See the great, feel the great.”

END_OF_DOCUMENT_TOKEN_TO_BE_REPLACED

HTC announced its new One M9 flagship yesterday, but the company also took time to tell us about the GRIP fitness device they’re working on with Under Armour and the new Vive virtual reality headset being made in partnership with Valve. Sunday in the United States feels like an odd time for all of these announcements to have happened (meaning they caught many of us off guard), but if you’re one of those that missed the keynote, you’re in luck. HTC has this morning uploaded the full press event video to YouTube for your viewing pleasure:

Xiaomi is known as being the rising star in the smartphone arena, making its way past LG last year to become the third-largest manufacturer of smartphones in the world. The success of the company is to be blamed largely on its Chinese reception, as it hasn’t launched a single device on this side of the Pacific.

That said, Xiaomi is going to hold a press conference in San Francisco, California later this month (via Android Police), but don’t get too excited if you’re hoping to hear about a North American launch, as the company has already confirmed that that’s not happening…

END_OF_DOCUMENT_TOKEN_TO_BE_REPLACED

We already heard that Sony would be hosting its usual press event during IFA early next month, but today we get official confirmation with screenshots of press invites making their way online (ePrice via XperiaBlog).

As previously reported, the event is scheduled for September 3rd (the week of IFA conference in Berlin) and the invite seems to hint at device announcements for a new smartphone. There are also hints at other devices on the invite, including what looks like the QX lens-camera smartphone attachment that the company first launched at IFA last year. Samsung has also scheduled its IFA press conference for September 3 this year.

As always, we’ll be on hand at the event this year to bring you updates as they happen.

AT&T sent out invitations today for a press event later this month teasing a look at “what’s next in wireless.” Whether that’s a new handset or a new wireless technology has yet to be revealed, but we’ll have all the details as soon as they come.

Report: Apple headset to be announced in 2022 but getting one might take longer

Report: Apple still working on multi-device charger, a future where all devices ‘can…

Earlier on Thursday, we reported on a press release from LG and Qualcomm that teased the successor to the Optimus G flagship would feature a Snapdragon 800 processor, and now the company has sent out another message regarding a mysterious press event. The affair will take place on August 7th in New York City, but no hints as to what we can expect were given, with LG simply calling it an “international media event.”

There’s a pretty solid chance that LG will announce the successor to the Optimus G at the event, but you never know. We’ll be sure to bring you everything you need to know from the event when it happens.  END_OF_DOCUMENT_TOKEN_TO_BE_REPLACED

After teasing the device for several weeks, Huawei finally unveiled its first true flagship in the Ascend P6 this morning in London. Just like the company teased, the device is ultra thin, coming in at just 6.18mm thin. Its size doesn’t compromise its specs, however, as the Ascend P6 is packing a quad-core CPU clocked at 1.5GHz and 2GB of RAM. It features a 4.7-inch display with a 720p resolution. The screen has “MagicTouch” technology, which essentially just means you can have on gloves and still use the display.

As far as the camera goes, the device is packing an 8MP shooter with an f/2.0 aperture and 4cm macro mode. Huawei is also touting its “IMAGEsmart” technology, which will find the best shooting mode automatically based on your surroundings. The front-facing camera is a whopping 5MP and has a setting that will automatically smooth out skin texture, adjust the clarity of your eyes, and as the company’s CEO says, essentially makes you look younger.  END_OF_DOCUMENT_TOKEN_TO_BE_REPLACED