You can use this Chrome extension to hide 2016 election coverage 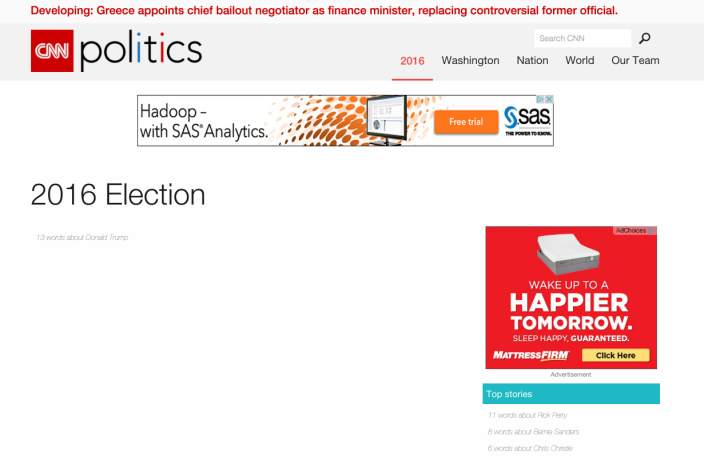 If you’re not located in the United States or you simply already have your mind set on a candidate, you might be interested in dodging media coverage of the 2016 election completely. And if you’re a Chrome user, you’re in luck. Thanks to a new extension hilariously named “I haven’t got time for the ‘Paign”, you can completely clean all of your favorite news and social media sites of any mention of 2016 American politics.

When you first start up the extension, a settings page pops up asking you how long you’d like to keep the campaign blocking in effect. You can pick between several options, choosing to stay “‘paign-free” until any day between “Next year” to after the election is over. You can also use this page to choose some other keywords to might want to block for some amount of time, like articles about “Millenials” or the “New York Mets”.

Currently, the extension hides news articles found on Twitter, Facebook, Slate, The New York Times, The Wall Street Journal, The Washington Post, CNN, Huffington Post, Vox, The Atlantic and Vice. Outside of these—with this extension at least—you’re going to have to just keep scrolling if you just can’t stand to read another story about Donald Trump.

Based on our quick testing of the extension, it seems to be pretty smart. Loading up the Vox.com homepage hid some stories, the number of which can be found on the extension’s icon itself. If you want to snooze the web filtering and get access to all of the US political media coverage you can handle, though, you can just click the extension’s icon to temporarily turn it off.

You can grab “I haven’t got time for the ‘Paign” on the Chrome web store for free.