Opinion: As a long time stock Android fan, I was pleasantly surprised by TouchWiz 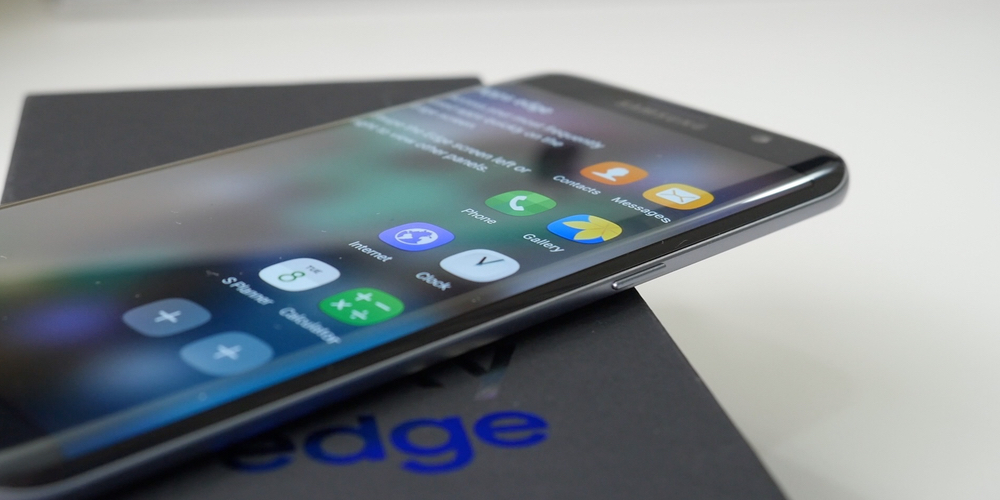 “Be together, not the same” is the mantra Google has been spreading for quite some time now. It’s a good reflection of its intent and purpose; with 1.5 billion active users and a myriad of OEM partners contributing to its growth, the OS couldn’t ask for more diversity. Among Android enthusiasts, however, a vastly shared belief is that the stock, unadulterated, ‘vanilla’ experience delivered by Google is generally superior to basically any of the offerings brought to the table by third parties. This mainly stems from a bad history that saw manufacturers continuously deliver sub-par experiences and often lag far behind in the update cycle, not to mention the numerous design inconsistencies which added up to Google’s own often messy and unclear aesthetics. When Material Design was introduced back in 2014, however, a few things started to change.

For one, notoriously ill-designed UIs such as those from LG and Samsung (as well as from HTC, Sony, and most others) started to follow Google’s now precise and definite guidelines more closely, giving Android an overall sense of basic consistency at least across major instances. Samsung’s TouchWiz, in particular, got often criticized over the years because of its excessive bloatware and poor design choices, but with the massive hardware overhaul brought by the Galaxy S6 last year, software too got a considerable Lollipop-based facelift which went a little under the radar. The Galaxy S7 brought the whole thing one step further, and even coming from a long series of stock Android devices, I have to admit that my experience with TouchWiz wasn’t just not bad, but left me thinking of it as an outright smart, good-looking and overall well designed ‘skin’…

Back in the Jelly Bean days, stock Android was almost a prerogative for anyone willing to venture deeply into Google’s OS and its hard – and yet rewarding – customization; vendors like HTC, Samsung and LG always tried to do most of the work for you, and often ended up producing badly-made pieces of software which resulted in bloated and frequently frustrating experiences. Vanilla Android, on the other hand, gave consumers the best the platform could offer simply by trying to stay clean and doing less, or, as I like to put it, working as a canvas; a blank piece of paper that the user – rather than a manufacturer – had to fill via the immensely powerful tool represented by the Play Store.

This is how I discovered apps such as Power Toggles, Light Flow, ES File Explorer, Nova and Action Launchers (as well as various icon packs), DashClock (with its extensions), SwiftKey, and a multitude of others, developed by third party teams, that stimulated both my love for the platform and the sense that Android’s puzzle-like structure truly allowed me to take advantage of virtually any part of my device to make it my own.

The majority of technology inept Android users don’t usually care, but making the OS your own is a fun experience, and the idea that an OEM would want to interfere with that process angered me. Which is why I — and many others — tried to stay away as much as I could from the so called ‘skins’ which, in all honesty, felt like entirely re-written versions of Android itself.

Being hugely interested in the design talk, I also wanted to have my phone as Google-y looking as possible, which often meant using – again – third party apps that payed more attention to how a Holo Light (or Dark) app was to be developed than any of the pre-installed ones I encountered on non-Nexus flagships. Last but not least was certainly the whole updates argument; yet another reason to worship at Google’s and Google’s altar alone.

With the introduction of Lollipop-powered devices, however, OEMs seemed to have finally found a common path to walk on; simple visual cues like toggles, the multitasking tray and the use of colors within apps started to align and adapt to Google’s, no matter which device you used, and even stock apps like Contacts, Messages and Email began to use Material’s animations and other landmark elements like the FAB, adding up to the overall consistency.

To claim that previously ugly UIs suddenly became gorgeous to look at would indeed be a bit of a stretch, but the shifting trend was a positive sign nonetheless. Samsung in particular seemed to have leaped enormously, passing from the admittedly atrocious ‘Nature UX’ to a cleaner – if a bit too bright in terms of color – look, a severely toned down software and a general attention to detail previously unseen by the Korean manufacturer. When I decided to pull the trigger on a Galaxy S7 edge earlier this month, I was nonetheless still a bit preoccupied about abandoning the long-established setup running on my Nexus 6P, so I tried to wrap my head around the idea that yes, I would probably have to deal with the fact that something about the new software would feel just wrong.

Except, much to my surprise, it didn’t. Immediately after the unboxing, I restored my apps and followed my own set-up process as closely as I could, and found way less barriers than I expected. Just like on any other phone, I fired up Action 3, which is easily (and by far) the best home replacement I have ever used, – and that would replace the Google’s stock launcher anyways – then installed the “Material Design” theme, which comes for free on Samsung’s own Themes app, and ultimately downloaded Moonshine, my icon pack of choice, to give it the look I had on the 6P. At this point, I was realizing just how similar, at their very core, the two systems are; the changes I made are very subtle and all focused on aesthetics based on my personal taste, but TouchWiz has got to the point where just a launcher replacement can significantly improve the experience, as everything else is either made customizable by Samsung itself or is simply good by default.

With the Material Design theme, the look of the S7 pretty much resembled the 6P’s in each corner, something that would have not been possible just a few years ago; and that, again, is just the look of it, which is as customizable as ever. However, TouchWiz took things a step further on a deeper, system-wise level, and offered me both the possibility of removing the stuff I did not want to see and to take advantage of actually useful stuff in the least intrusive way possible. The Edge Panel, for example, works normally even with a third party launcher enabled, and with the integrated toggles I removed Power Toggles entirely, now relying on Samsung’s elegant, intuitive and easy-to-use solution. I then started to enjoy a bit of true multitasking, which works really well on a 5.5″ screen; you won’t do any serious work on it, but being able to answer to someone on WhatsApp or browse Reddit while watching a YouTube video is a blessing – and it’s curious to see how Samsung is actually leading the way here, with Google prepping its own version for Android N.

The Settings app offers quick shortcuts to up to nine of your most frequently used sub-menus, something I find consistently useful. While the phone’s UI may look a tad too big at the beginning, a simple tool allows you to scale the DPI and pack in much more information on screen; a very nice and welcomed touch. I can set a different wallpaper for the lockscreen (or even a series of pics) without replacing it entirely. The app switcher has a pleasing Material-inspired animation, which would feel right at home on a stock device. The always-on display, despite not being overly smart, is still a more intelligent use of and AMOLED panel than a screen completely turned off. Samsung’s ‘Smart Manager’, now integrated into the settings, is something I would definitely see a regular user appreciate to keep an eye on its device’s stats such as RAM and storage usage. 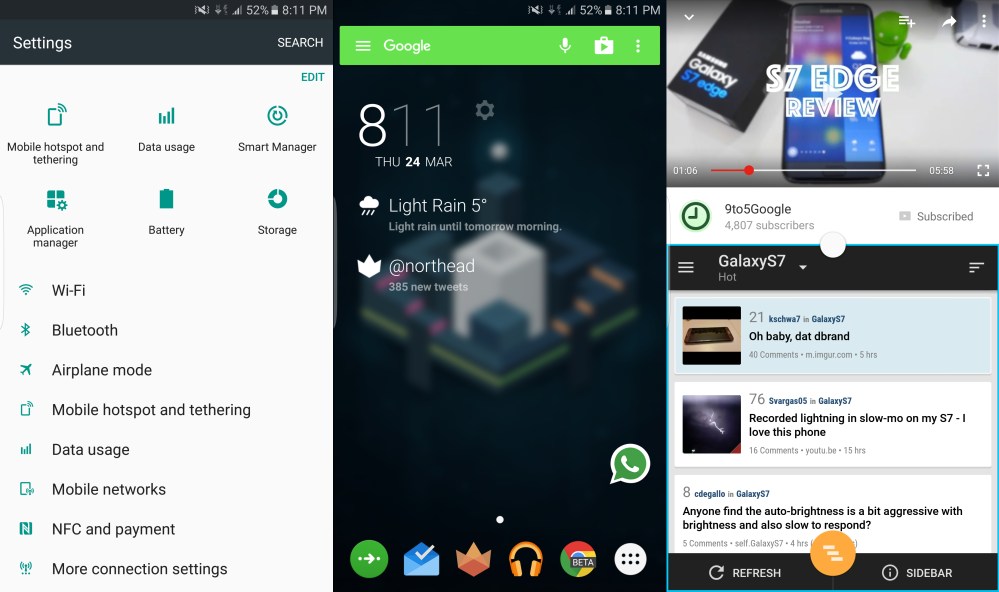 These are all little things, but they are useful and appreciated touches nonetheless. Most of all, I have the feeling that Samsung put a lot of effort on bettering the end user’s experience, and it did so with a very Google-like formula: it cut out much of its clumsily-working software and focused on nailing the basics, and the result is a ‘skin’ that actually feels like an extra layer of customization thin enough not to get in the way and yet sufficiently consistent to make its presence noted and worthy.

Indeed, I still wish I could entirely uninstall apps such as the Gear VR’s, ‘My Galaxy’ or even the stock Email client, but I’m far from running out of storage and the presence of a microSD slot puts this preoccupation to rest. What really worries me about the future of my phone is how well it will keep up with updates; Samsung is notoriously bad at this – just look at the Galaxy S6 and S6 edge, still anchored to Lollipop for the most part – and while my international unit may be more blessed than others I wouldn’t put my hopes up just yet; let alone the carriers’ versions. Sure, we may have already got a prompt security update, but only time will tell how Samsung will deal with this issue, and in all honesty I am not particularly confident.

On the other hand, were Google not to introduce anything drastically interesting or useful with Android N, I wouldn’t be too angry about immediately missing the train. So long as my device keeps its performance smooth and battery life strong (both areas that have so far surprised me greatly) I might as well live my TouchWiz life happily, and finally start suggesting that something outside of the vanilla Android realm exists — and if not necessarily better, it’s at least just as good.