It wasn’t that long ago that I thought the two smartwatches Google is set to introduce were actually going to be solely Google-branded, just like the Pixel phones. It would make sense with Google’s new hardware division — which is surely but slowly becoming a more serious business — that the Mountain View company would go all-in on smartwatches, offering a top-to-bottom lineup just like Apple.

It very well may have been the plan at one point for these to be “Nexus” watches, but today we learned exactly how they’re not going to be Nexus watches. We already knew that they would be LG-branded, but now we know where the Google comes in: a “Designed with our friends at Google” label. At the very least, this is interesting to consider in the broader realm of Google & OEM partnerships…

We learned this tidbit via leaked retail packaging for the new watches, which surfaced earlier today. As you can see above, the box — for the LG Watch Style, in this case — is labeled “Designed with our friends at Google” right below the product name, suggesting that Google wants it to be known that this is an LG product, but that its hands have definitely been on it. It’s a stamp of approval, and a clear recommendation from Google since they co-developed the product.

I initially thought this might just be a one-off thing with LG, but lo and behold, the branding — or very, very similar branding, at least — appeared again today (coincidence?) with Google and Ivyrevel’s announcement of their joint project which uses Google’s Awareness API to build custom dresses.

Ivyrevel uses similar language as LG in both in logo form and text form on its website. Obviously this dress is not the same kind of involvement as building the headlining Android Wear 2.0 watches, but it’s a notable partnership nonetheless. 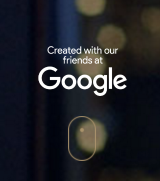 But finding something unique to wear can be difficult. That’s why we, with our friends at Google, developed a technology that allows us to create one of a kind designs based on how you live your life.

This seems to be something that Google is standardizing, and in my opinion that’s an interesting development, especially considering the unclear future of Google’s relationships with its third-party hardware partners. Google introduced the world to the Google Pixel last fall, and while it may not be making much dent in Samsung or LG’s pockets quite yet, the inevitable question that many have been asking over the last several months is how Google is going to maintain those relationships when they’re competing directly with the very companies they call “friends.”

Yes, you could argue that they’ve been “competing” for a while (in the form of the Nexus phones, for example), and that’s partially true, but the Pixel is a different story. It’s meant to be mass-market, high-end, and go head-to-head with the HTC 10s and Galaxy S8s and LG G6s of the world. And so far, Google is killing it. The Pixel is perhaps the most successful new entry into the Western smartphone market in years (but honestly who is there to compare to? Nextbit?), but if it’s going to continue to be successful, it’s going to mean hurting the companies that have made Android what it is today.

I know this seems like a little bit of a tangent, but let’s talk a little bit about one particularly relevant example in the world of Google OEM partnerships lately: Huawei, the maker of the Nexus 6P. We learned via an Android Police report in October that Huawei turned down an offer from Google to make the Pixel phones because Google wanted a more straightforward OEM relationship (and Huawei wanted its branding on the phones). We also know via the same report that Google approached the company last fall for a future mid-range device:

Our source claims that Huawei is one manufacturer currently being solicited by Google to produce a phone (i.e., Google has put a call out for bids to potential partners) – for the second half of 2017. A mid-range device, at that – suggesting maybe this phone won’t be Pixel-branded.

As a little bit of an aside, I had independently heard in September that Google at the time specifically referred to this mid-range phone — supposedly set for release in the second half of 2017 — as a “Nexus” in an internal OEM request email, hence my “Nexus isn’t dead” tweets in September. We also heard about that Huawei “Nexus” tablet from a couple sources, which is still happening as far as we know. If this is the direction that Google is taking with non-Pixel partnerships, that might be getting the “Designed with our friends at Google” label, although we can’t be sure.

Like I said, with the Pixel brand now at the forefront of Google’s hardware strategy and the Nexus brand — with its largely for-developers-only connotation — seemingly left for dead, it’s been a mystery how these Google & OEM partnerships would look from a branding perspective. Clearly Google has more influence on these watches than any of the usual Android Wear-powered watches, but they’re still just partner devices and they aren’t solely Google-branded Pixel devices. They’re in between, just like the Nexus devices. I think we know how Google is now going to approach their branding.

And to bring the point home with what I was saying above, it makes sense that Google would reach out its hand to offer to bring its partners’ products up to performance and quality standards, throw in some joint marketing (clearly going to happen with these LG watches, since they’re the first AW 2.0 watches), and let them keep their own full branding. It’s not like any of these OEMs have any OS alternatives to run to yet, but it’s a clear signal from Google that it doesn’t want to just leave these partners out in the cold as it rushes to compete. And it has benefits for OEMs that want to work with Google on high-quality, well-optimized products that work the way Google would want them to.

Lockheimer goes out of his way to say that Google is ’not closing the door completely’ on Nexus https://t.co/UrLtwS9LLZ pic.twitter.com/yXGbIUK6Sa