A new example of Android malware is discovered every 10 seconds, say security researchers 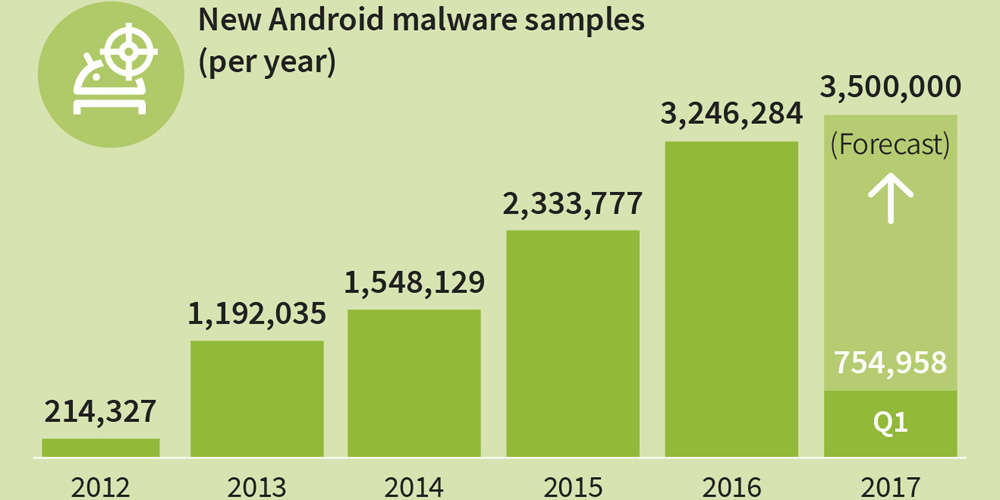 Security company G Data says that a new piece of Android malware is discovered every 10 seconds. At this rate, the company is predicting that there will be 3,500,000 new malicious Android files by the end of the year.

The threat level for users with smartphones and tablets with an Android operating system remains high. In all, the G DATA security experts expect around 3.5 million new Android malware apps for 2017.

Only 4.9 percent of smartphone and tablet users have Android 7, which has been available since August 2016. 20 percent still use version 4.4, 32 percent version 5 and 31.2 percent Android 6.0. The problem is that third party providers do not adapt the new operating system for older devices (“older” in this case meaning one year or more).

It should be noted that G Data sells anti-virus software for Android devices, so it has a vested interest in playing up the risks. The headline number is for individual instances of malware, rather than separate apps. Additionally, much of the malware will be restricted to particular third-party app stores, and a good percentage of it will be adware – which is annoying but not dangerous.

However, there’s no reason to doubt the raw numbers. As ever, the advice is to keep your device up to date, to only download apps from the Google Play store and trusted developers, and to never open unexpected attachments even if they appear to have been sent by a known contact.