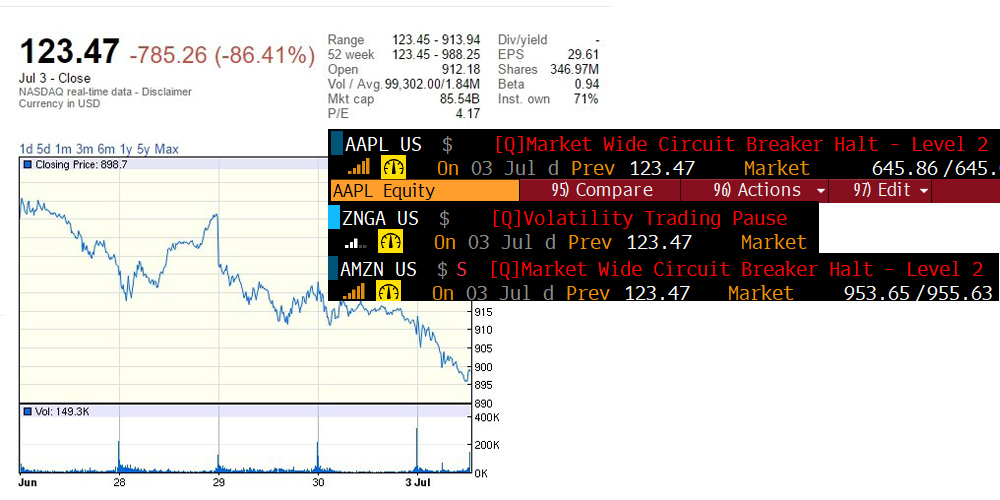 Incorrect market data displayed by Bloomberg and others
0

A Nasdaq glitch caused a number of major trading platforms to display Alphabet’s share value as $123.47, some 86% below its true value at the time. The incorrect price for Google’s parent company was shown on Bloomberg, Google Finance, Yahoo Finance and others.

Around 16 different stocks had their apparent value set to the same $123.47 price, including Apple, Amazon and Microsoft.

As part of its normal process, the UTP distributed normal test data, and certain third parties improperly consumed and propagated that data. Nasdaq is working with UTP and third parties to resolve the matter.

It’s unclear at this stage how the test data was propagated, but it appears that it may have happened first on Bloomberg, with other services then picking up that feed.

Alphabet, Apple and Amazon each saw their apparent market cap fall significantly, while Microsoft briefly appeared to be worth almost 80% more.

Automatic protections apparently kicked in, with trading in several stocks shown as having been halted on Bloomberg terminals, which displayed various messages indicating suspension due to volatility. It appears that market trading was not affected, including pre-market trading.