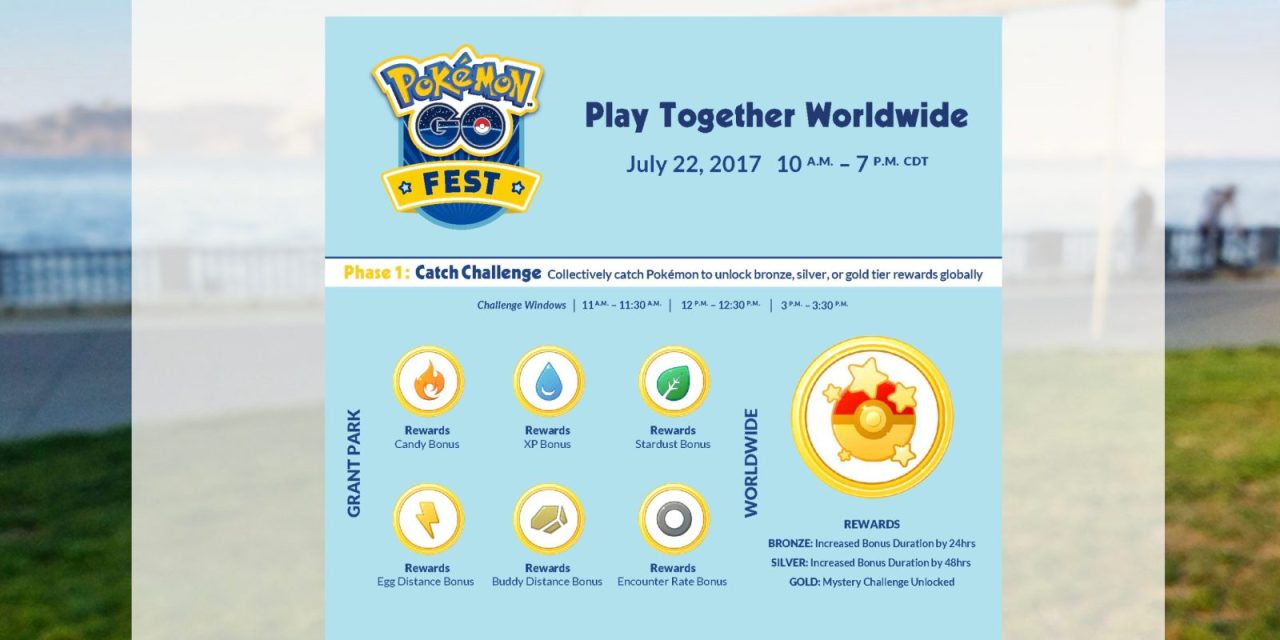 On the heels of a Pokémon GO update last week which included a special Pikachu, and other limited time items, the Pokémon GO team has announced details about the first official live event in Chicago on July 22.

The good news is that even those who can’t make it to Chicago for Pokémon GO Fest can still participate and earn global rewards. Pokémon GO Fest will have three phases, Catch Challenge, Mystery Challenge, and Global Reward. The first official live event has the tagline of “Play Together Worldwide,” emphasizing the community focus. Here is how things will work for those attending the event in Chicago:

During the day, there will be three Challenge Windows in which Trainers everywhere will work alongside those in Chicago to unlock global rewards. During the Challenge Windows, Trainers in Grant Park will attempt to unlock perks for Pokémon GO players around the world by catching certain types of Pokémon. Each Pokémon- type will be tied to a different perk, so Trainers at the park will need to carefully choose which Pokémon they catch. Will those in attendance try to catch Electric-type Pokémon to reduce the distance required to hatch Eggs, or Grass-type Pokémon to increase Stardust bonuses, or other Pokémon- types to secure a variety of other bonuses? Join in the action and find out!

And here is how players from around the world can be involved:

Meanwhile, Trainers outside of Chicago will attempt to catch as many Pokémon as possible during the Challenge Windows to extend the duration of the bonuses unlocked by those attending the event. If Trainers around the world catch enough Pokémon, a mystery challenge will be unveiled in Grant Park that, once completed, will unlock an extra-special bonus across the globe. Trainers everywhere will want to grab their friends and family to help make this the biggest celebration in Pokémon GO’s history!

In addition to the details about the Chicago event, The Pokémon GO team has announced dates for seven Pokémon GO Safari events across Europe.

Pikachu Outbreak is scheduled for August 9-15 in Japan with more details coming soon. There is also a new website for keeping an eye on all of the official Pokémon GO events.

Are you planning on participating in the upcoming Pokémon GO Fest? Let us know down in the comments. Pokémon GO for Android is available for free on Google Play.