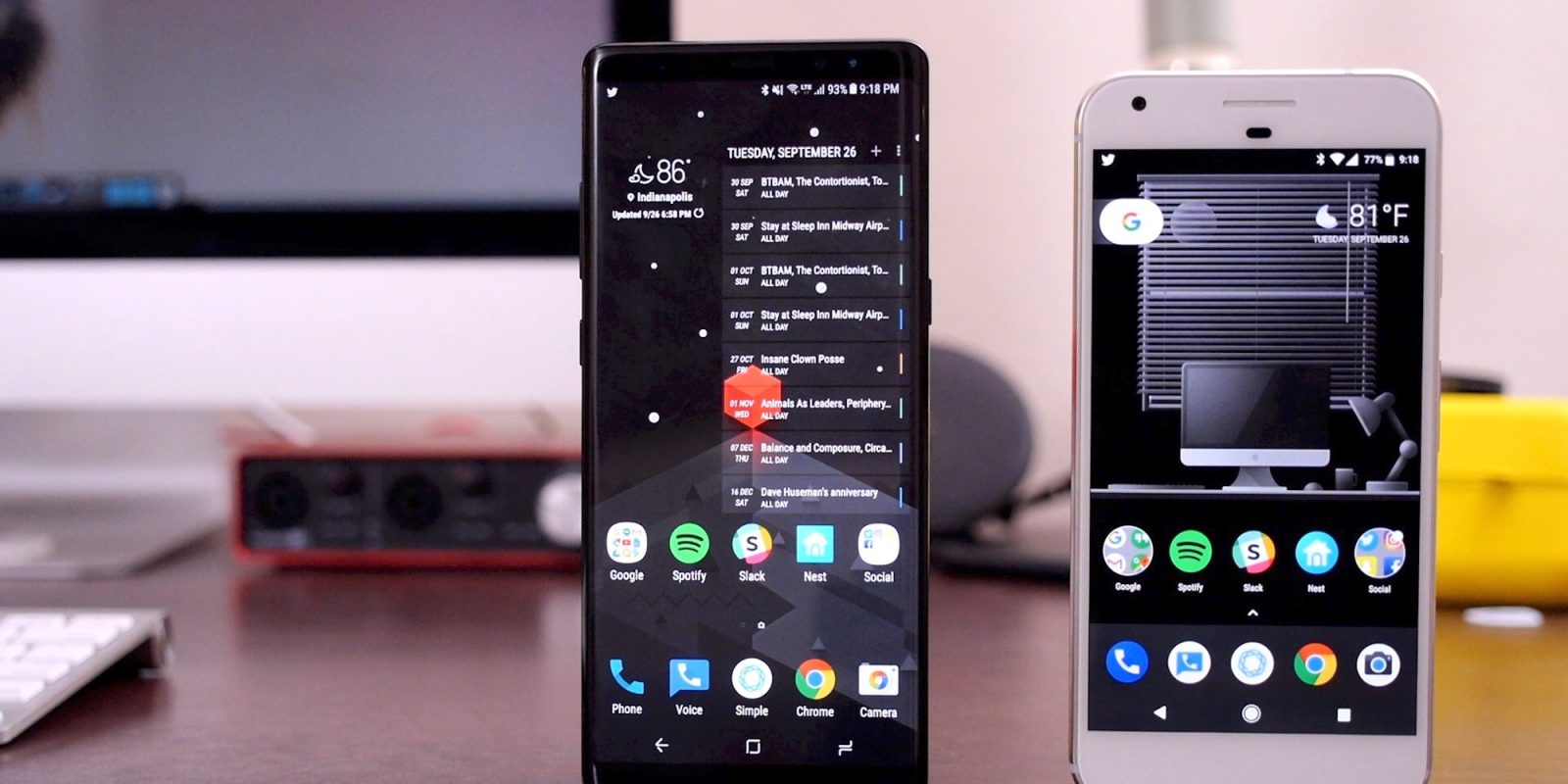 We’re excited to see Google unveil the Pixel 2 and Pixel XL 2 next Wednesday, but the original Pixels are still some of the best smartphones on the market. With so many new trends like dual cameras and edge-to-edge displays popping up in 2017, we wanted to see how well the Pixel XL holds up against some of today’s modern flagships, in what we’re calling Pixel Week.

The Pixel and Pixel XL already had a pretty uninspired design, but when compared to the Galaxy Note 8, it looks downright plain. The Spartan design isn’t winning any style points, but its aluminum build is at least more durable than the Note 8’s glass backing. Most people will also agree that the Pixel has a better location for its fingerprint sensor than the Note 8, though of course this will come down to user preference. Samsung’s latest flagship also includes wireless charging, which the Pixel unfortunately does not.

The Pixel XL looks even more dated when comparing the phones from the front. Where the Pixel XL has iPhone-esque bezels that offer little functionality, the Galaxy Note 8’s massive 6.3″ curved display covers almost the entirety of the its face. Sadly, neither phone offers front-facing speakers; both fire their audio from the bottom of the chassis, and neither sounds too impressive.

Despite an aging design, however, the Pixel XL definitely stands its ground when it comes to software. It runs on Android 8.0 Oreo, with a much cleaner software load than you’ll find on the Galaxy Note 8, which has an older version of Android (7.1.1 Nougat) and Samsung Experience on board. The cleaner software directly translates to faster performance, and despite the older Snapdragon 821 chipset compared to the Note 8’s Snapdragon 835, the Pixel XL is the faster phone, flying through any task you throw at it.

Both phones have absolutely stunning cameras, and it’s hard to name a definitive winner. I think I generally prefer the images from the Pixel XL, whose camera produces more natural colors. However, the Note 8 has the advantage of diverse manual controls and a secondary camera that allows for lossless 2x zoom and artificial bokeh effects.

Despite not being able to replicate 2017’s hardware fads of slim bezels and dual cameras, the Pixel XL still holds up surprisingly well against even the most expensive flagship on the market. Even today, the Pixel and Pixel XL are fantastic buys, and we’re expecting next week’s sequels to be no different. Stay tuned to Pixel Week to see how else the Pixel has held up over the past year!