With Christmas quickly approaching, many are concluding last-minute shopping as stores — both physical and virtual — push various deals. Meanwhile, crunch time is also happening up in the North Pole.

In an amusing, but informative blog post today, one of Santa’s elves describes how the North Pole takes advantage of the Google Cloud Platform for all their critical gift-giving needs.

Penned by Santa’s Chief Information Elf, today’s post on the Google Cloud Platform (GCP) blog describes how the North Pole runs on the cloud “to meet the demands of bringing all those gifts to all those children around the world.”

In the past century, the elf population has apparently not been able to keep up with the growth of the world’s population and increasing complexity of toys.

You see, North Pole Operations have evolved quite a lot since my parents were young elves. The world population increased from around 1.6 billion in the early 20th century to 7.5 billion today. The elf population couldn’t keep up with that growth and the increased production of all these new toys using our old methods, so we needed to improve efficiency.

As such, efficiency has been boosted by adopting the cloud:

The post goes on to detail how the elves had to turn to GCP to run their virtual machines:

We tried to run it all from some computers we built here at the North Pole but we had trouble getting enough electricity for all these VMs (solar isn’t really an option here in December).

Also detailed is how Google Maps, BigQuery, Cloud Spanner, and Cloud ML are used for the Christmas Planner application: 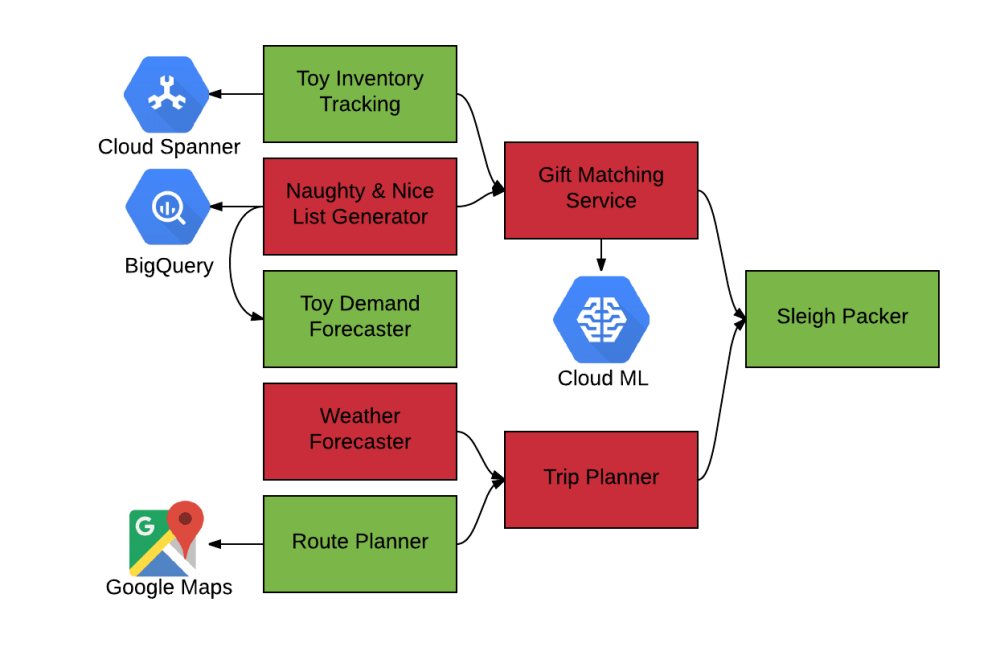 Other highlights are Internet of Things toy production stations, machine learning to determine child and parent delight levels for various presents, and so much more. In all seriousness, this post is well worth the read for providing a pretty good explanation of Google Cloud’s various services and “real-world” applications.