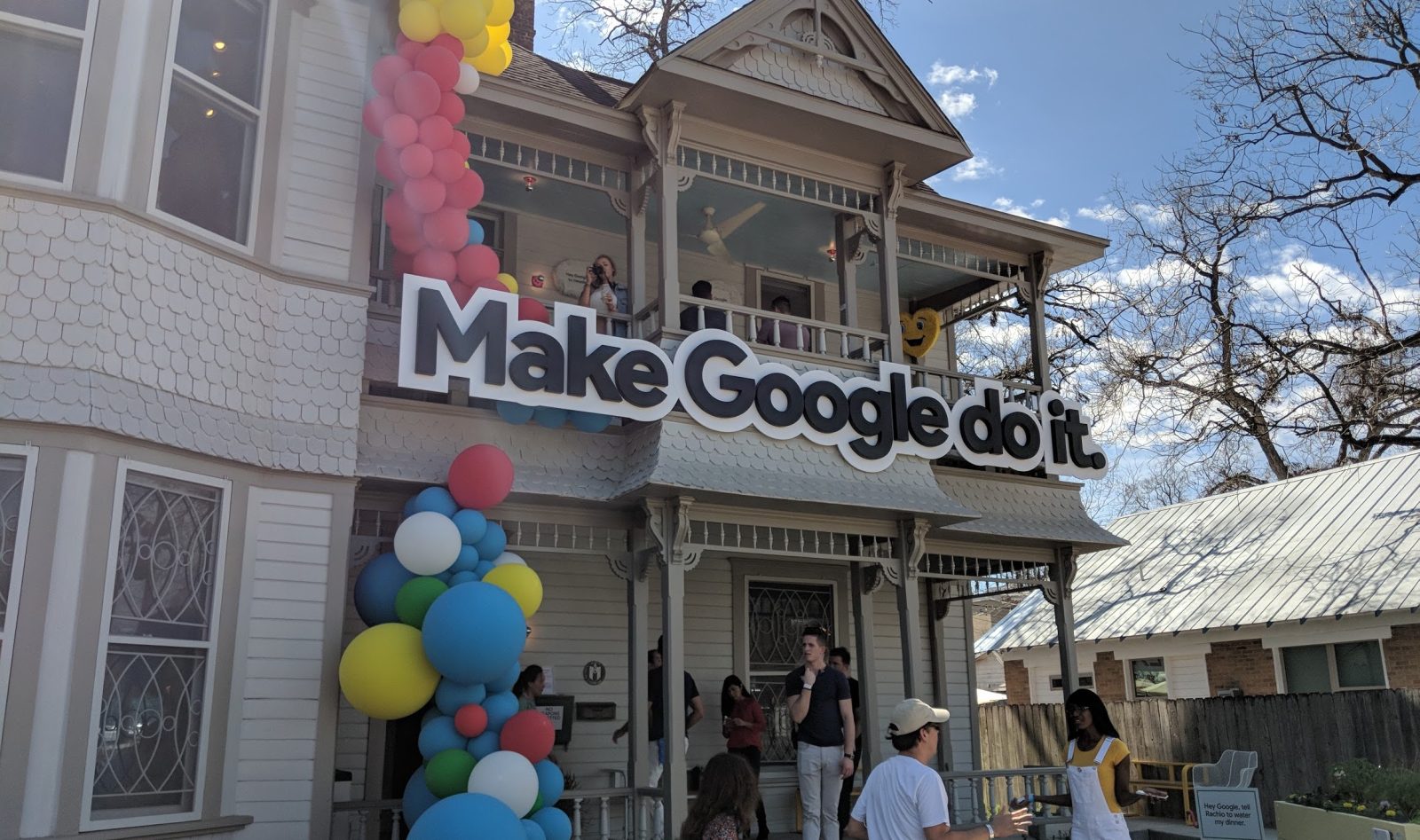 We’re here in Austin at the famed South by Southwest music and film (and “interactive”) festival, and Google once again has a significant presence this year, as expected. Besides its Assistant telephone booths and electric cabs, though, the biggest showcase is the Google Assistant Fun House.

If you’re not as fortunate as us and aren’t in Austin right now (sorry for the not-so humble brag), there’s still a good chance you might want to check out the house. Well, you can. We took dozens of photos (and a couple videos, too!) so you can see everything we saw…

The gist of the house is about as you’d expect — there are several rooms that you walk through that showcase different functionality of Google Assistant-powered devices and other Google products. For example, there’s a room showing off a Nest Cam IQ working in tandem with a Home Max, and another showing how your Home can control media displayed on your TV. It was basically a crazy (“fun”, I guess?) version of the modern day smart house.

But the first demo actually happened in the front yard.

Google opened up the tour with a bang, letting you take a ride in a low-rider car that… bounces. Alot. I didn’t get to take a ride (the line for the Fun House was a bit longer if you opted for the car. boo!), but I got to spectate a few different groups of 4 people enjoy this mini amusement ride.

What does this have to do with Google Assistant (or Google at all for that matter)? I have no clue (nothing), but I still love it. It looks like the car was put together just for this event. I’ve never seen it before (let me know if you have!), and it has a Texas “BOUNCE” license plate. And it says “Hey Google” on the front. Google definitely paid attention to the details!

Check out the video and gallery below:

After making it past the blue low rider, the Google Assistant helpers (they were dressed similarly to the ones we saw at CES — with a mostly-white dress and a splash of Google color) show off some custom-designed Assistant functionality in the garden. That’s pretty much the story of the whole house, by the way. Beyond the typical demos, Google designed some very specific experiments to make you say “wow!” Too bad most of them will never be real products.

The very first Google Assistant demo that Google shows is in the Fun House’s front garden. There are several pink flamingos in the yard, and you can use a voice command to “make them dance” (they go up and down). Then Google shows off turning on a sprinkler system. The latter is far more realistic.

After you make your way through the garden, you’re directed into the house to the introduction room. There, a faux Googler walks you through what the experience will be like and hands you a map to the house. We were given free reign to go wherever we wanted, but he requested that we stick roughly to the path so as to not cause delays for the others waiting outside (yes, there was a 45+ minute wait for this attraction which I waited through… for you).

Hilariously, this was also the room where we were asked to put our phones on silent. There was going to be a lot of “Hey Google” and “OK Google” happening, and Google didn’t want any of the demos being thrown off by all the phones in our pockets. Of course, they said if you have one of the “other kinds of phones,” then don’t worry about it. I was the only one in the room with an Android phone.

Here’s the full map of the house. There are a lot of rooms ahead…

The first official room you enter is the dining room, where another Google Assistant assistant (intentional double use of “assistant”, there) was showing off the Pixelbook. He walked through some of the basic functionality that you probably already know about if you’re a reader of 9to5Google. The feature that made people excited was the stylus-circling-to-search feature we saw last year.

Otherwise, this was the most uninteresting room, I think. At least for me.

Next up is the kitchen, and if you’re a booze aficionado, this was the room for you. Google had a custom setup that let attendees use a command to pour margarita mix in the blender and another command to start the blender up. Then, those of us in the room could use another entirely custom command (and custom hardware!) to find the spices we might need for a recipe.

This was a common theme in the house, as I mentioned. Google really wanted to dream up the wackiest ideas possible, and some of them really did come to life. They really did make a huge spinning wheel of spices, and you could just say “OK Google, get me the paprika” and it would spin away to bring you exactly the spice you needed. Someone in the room asked if you could buy it.

As we passed through the laundry room, we ended up in a room dedicated to our furry friends. The gist of the room was simple: How can Google Assistant help you take better care of your pets? Of course, they showed using a Google Assistant command to inquire about puppies that are available on PetFinder, and demoed a command for activating a self-cleaning cat litter box.

This room also served as a quick demo of some Nest products. Both the Nest Cam IQ and the Nest Thermostat E were on display here, but there wasn’t anything unique or interesting about them really. The Google Assistant assistant simply showed using the IQ to keep your eye on your pets.

Walking on through the Let’s Paws room, we landed in the living room. This was the worst room of them all, mostly because it was filled with a dozen old televisions that made an unbearable high-pitched ringing noise — although no one else seemed to be able to hear it. I was also reminded just how much heat those old monitors create. That said, the demo was pretty interesting. They just used Assistant to show a collection of sunsets on all of the different monitors.

After this room, we got to head up stairs. And just like everything else in the house, the stairs were also decorated in “Make Google do it.” style. Just make Google do everything was the message.

The first upstairs room we visited was the music lab, and, as you would expect, this room was all about demoing the Google Assistant’s music capabilities. Nothing all too special here — they just demoed using the Google Home Max to play some music, and somehow got a few screens mounted on the wall to show some examples of the music that was playing.

Experiments was a cool room, and the demo was, appropriately, of one Google Assistant experiment. Safari Mixer by rehab lets you have some fun creating a wacky Safari animal. The purpose of this demo is to demonstrate cross-display functionality with Google Assistant. You dictate to create the animal on your Home device, but then it pushes it to your phone to look at it when it’s done.

Next up is the bedroom, where Google demonstrated some obvious Assistant use cases. Of course Stranger Things had a tie in here, where the Assistant assistant told the Home Mini to play the show on the TV. Google was also referring to this room as the “hangover room” (remember the margaritas from earlier?), and demonstrated setting the mood lighting and the music appropriately.

My favorite demo of the entire Fun House was in this room, though. After demonstrating the above, they showed a robotic arm that was ridiculously mounted to the top of a fake dresser. With the command “OK Google, rearrange my sock drawer,” this huge robot opened the dresser drawer, picked up some socks, moved them around, and then closed the drawer. Yes, it was ridiculous, but it was just that bit of ridiculousness that made it fun.

The final room in the house was the light room. Basically, there was a big light in the middle of the dark room and we were all placed in there (smoke machine and all) to play around with the commands that Google had displayed on a screen. It was claustrophobic, but still fun.

Finally, we got to the backyard. This was obviously my favorite part of the whole tour. There was a smorgasbord of guacamole, chips, other snacks, drinks, and Googlers walking around handing out pizza. Does it get any better than this? (Yes, it would have been better if it wasn’t 90 degrees F.)

I didn’t get to go in obviously, but there were some awesome signs throughout the house.

It was a fun little brand activation. It was obviously not meant for those who are already well educated on Google products, but rather those aware of Assistant’s existence but haven’t taken the leap to deck their homes with Assistant-enabled products. Oh, and clearly Google was hoping to build relationships with professionals at SXSW who might want to partner up for one reason or another.

But overall, it felt like a huge interactive ad. Because it was. The “map” of the house even encourages you to head to the Google Store to make your house (kinda) like theirs. And I think it was effective, honestly. There was so much attention to detail (they even handed out umbrellas, snacks, and iced rags while we waited in the heat), and they really made it feel like a day at an amusement park.