Announced at last year’s October 4th event and reconfirmed last month, Google Assistant Routines are finally beginning to roll out. This feature, which allows a single phrase to initiate multiple commands, is launching in the United States and replaces the existing “My Day” feature.

The final version is not all too different from what 9to5Google was able to activate last week. When available, users will see that the previous “My Day” menu has been replaced in the services list with “Routines.”

That previous daily recap feature has been integrated into the new “good morning” Routine, with users still able to hear the weather, commute, calendar, and reminders.

However, the new functionality is significantly more powerful and adds the ability to take your device off silent mode and adjust smart home appliances, like the temperature on a thermostat. Meanwhile, after running through these commands, users can have Assistant begin playing music, news, radio, podcasts, or an audiobook.

To further customize the experience, users can change and add multiple phrases to trigger one Routine.

So far, we’ve seen Routines enabled on Android and iOS. On the latter platform, Assistant features a nice overlay at the top of the screen to indicate when you’re using a Routine. At the moment, only the “good morning” one is live.

Each has the same general functionality, but there are slight tweaks on what users can do. For example, sleep sounds are only accessible from the night related Routine. The automation feature will be available on Google Home and Assistant for Android and iOS over the coming days.

Update 3/15: The five other “Ready-made” routines are now live in Google Assistant. 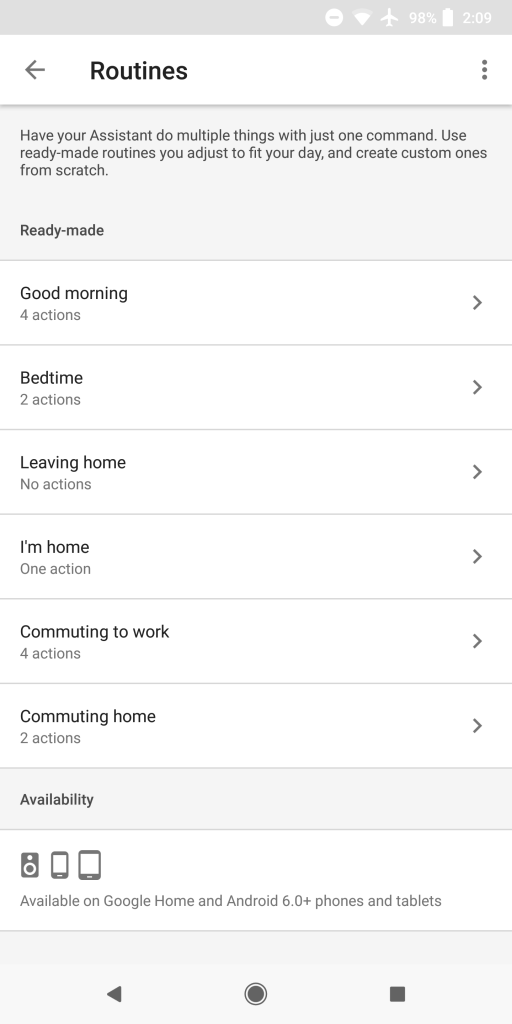